Dragon Quest, one of the first JRPGs, hasn’t changed its tried-and-true formula much in the 30 years since it first landed on the shores of North America.  With eleven mainline games and dozens of spinoffs, remakes, and crossovers, it’s hard to find an RPGamer who hasn’t played at least one game in the series.  For those who entered into the series in the more modern era, there’s now an opportunity to revisit the trio that began it all on the Nintendo Switch, including the most polished of the original three games, Dragon Quest III: The Seeds of Salvation.  With improved gameplay flow, character classes, and iconic music, it’s the perfect cap to the original Dragon Quest trilogy.

The story of Dragon Quest III is simple but hauls the game along pleasantly: as the son or daughter of the revered hero Ortega, the player must set out with three fellow party members, retracing the steps of his or her father to save the world from the evil he failed to vanquish.  Dragon Quest III also does an excellent job serving up regular bite-size doses of story that flesh out the world, as trying to figure out where to go and what to do next relies upon talking to pretty much every single NPC in the game.  While this does mean the game has significantly more direction than its predecessors, it also means ample backtracking if the player happens to forget an important piece of information or doesn’t act on it in a timely manner. These parts of Dragon Quest III plant the seeds of what would become Dragon Quest staples later on. 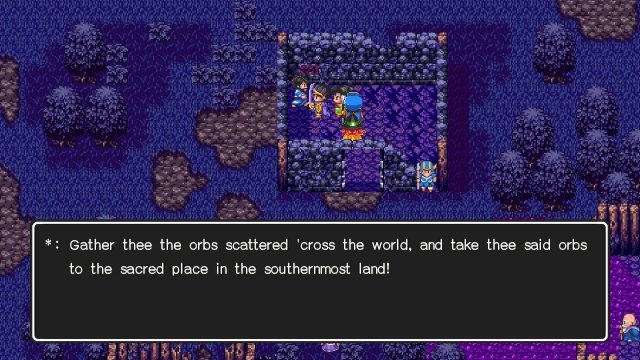 Talk to every NPC to glean important progression hints.

Combat is where heroes will spend the majority of their time due to the high encounter rate in Dragon Quest III, but before launching into the fray with familiar faces like slimes, chimeras, dragons, and more, players must form a party. At the outset of their journey, the hero selects three companions, though these can be swapped in and out as desired, and for the Switch version, a default trio of party members is offered: a warrior for taking the hits and dishing out some physical damage, a cleric to heal all wounds, and a mage to blow things up.  This safe, standard party will get the player through the full game if desired, without ever changing.  However, for those looking to experiment, options are on the table.

Shake up the party with class selection — complementing the above-mentioned trio, there are also Martial Artist, Merchant, Gadabout, Thief, and an additional unlockable class, Sage.  Each has its own advantages and drawbacks.  Characters can be male or female, which dictates their starting stats as well as personalities available to them.  Personalities, initially set upon character creation, further customize a character by increasing and decreasing certain stats, and can be modified later by either books or accessories. While gender and personality aren’t required, they do add an interesting depth to character creation and gear setup.  For those looking to min-max their party members, combining together the right class, gender, and personality type is very satisfying. 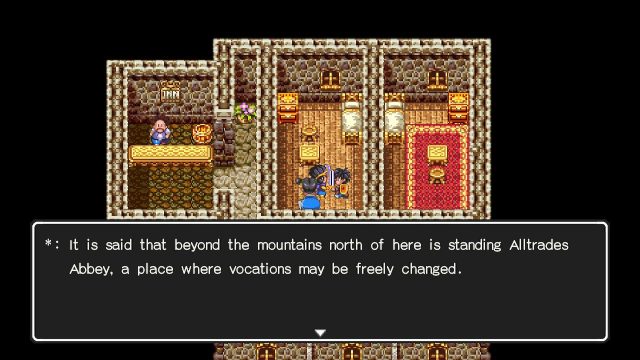 Alternatively, head to Alltrades Abbey, making its debut in Dragon Quest III before receiving a name change and becoming a series regular, allowing characters who’ve reached level 20 in their first class to change to a new vocation. These class changes can be combined together to create unique roles that wouldn’t normally be possible; for example, leveling up a high agility martial artist before turning them into a cleric to ensure favourable turn order, or a mage can be transformed into a warrior who can buff themselves before going on the offensive.  There’s quite a number of interesting possibilities, and while class changing is entirely optional, it behooves players to change things up at least once during gameplay.

Exploration of the world of Dragon Quest III has been streamlined compared to its predecessors, with the world being both large and still readily accessible.  The hero learns the Zoom spell early, allowing the party to travel between visited cities in the blink of an eye.  As the story progresses, additional transport including a ship and a flying mount become available.  As large amounts of backtracking are needed, along with level grinding, all of these ways to get around are greatly appreciated and reward exploration in a fun way.

The game length of Dragon Quest III may be highly variable between players, depending on class combinations selected and the amount of leveling consequently required, but players can expect to clock in around 20 hours to finish the main story with one set of class changes. Even one or two levels can make a big difference in boss fights, both in terms of stat acquisition and available spells.  The Switch version also offers additional post-game content not found in the NES version, which requires not only skillful application of multiple class changes but high levels and keen strategy, for those looking for an additional challenge. 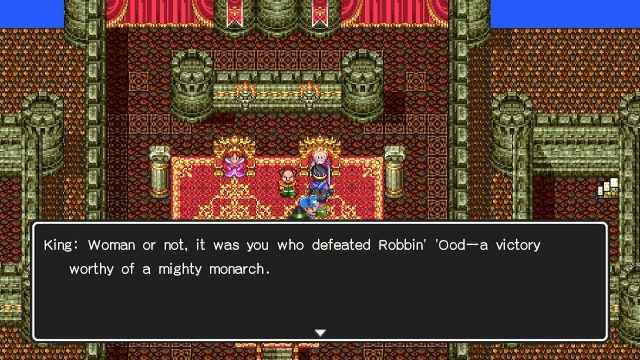 Certain dialogue varies if the hero is a boy or girl, a nice touch.

The music of Dragon Quest III certainly stands the test of time, with beautiful tunes that are nostalgic even to someone who entirely skipped the original release.  There’s something about Dragon Quest music that just makes it feel warm and familiar.  Graphics have seen an upgrade from their original NES versions even though their age is clearly showing, and while the mix of graphical clarity between the character sprites and background can be a little jarring at first, it doesn’t particularly impact the game and it’s easy to get used to the blend fairly quickly.

Dragon Quest III is an interesting game, and I’m glad I finally had the opportunity to try it out.  Dragon Quest III laid the groundwork for a lot of modern Dragon Quest norms, such as class changing, spell and weapon variety, and world building.  It’s also a clear product of game development of the era, where game length is inflated by mandatory leveling up paired with little story direction.  Leaving it up to the player to figure out where to go and what to do next, as well as how much time to spend beating up foes to acquire all-important spells, is an artifact of NES-era development; whether this is attractive or repulsive is highly subjective and makes the game a problematic recommend.  Still, I have no regrets about having gone back and finally having the chance to play, and for Dragon Quest fans who haven’t yet done so, it’s worth a look.