Some of the best roleplaying adventures began in local bars. For Dike Thompson, hero of Dragon Knights Glorious, the adventure (or at least the game) begins the morning after he gets caught up in a massive bar brawl and finds himself in jail. He and his fellow cell-mates have all come to town to claim their chance at becoming one of the famed Dragon Knights, a chance that the previous evening’s antics all but scuppered.

This is where the game begins, but not the story. After this cheery prologue, the player leads Dike through two opening chapters. Dragon Knights Glorious is a hybrid RPG / visual novel adventure game, so the choices the player makes often have real consequences. The fate of Dike and the other jail-birds is left unresolved at the beginning because it’s possible to create multiple outcomes for it. All but one of those outcomes results in a game over, but they’re interesting nonetheless. Provided the player makes the obvious “good” choices, a friendly witness will exonerate him and the others.

The main point of the game is to enlist with the Dragon Knights, but this is no easy task. Any man of eighteen years or older may have his one chance at glory, but that chance is one in one thousand or less. Due to the incident in the bar, Dike is almost too late to sign up, and gets put into the oddball squad of recruits who are variously too hotheaded, too old, too foreign, or too female to be considered likely successes. This is the start of Chapter 3, wherein most of the game’s RPG play happens. There’s a single dungeon in Chapter 1 that’s as much choose-your-own adventure as anything else. The game presents the player with a number of items, of which three can be chosen. The choices determine which parts of the first level can be completed. Chapter 2 is pure narrative adventure, setting up the events leading to Dike’s incarceration.

The third chapter focuses on Dike’s squad and the trials of boot camp. Every week there is a written test and a practical exam. Two members from the squad must take the test and pass with a certain combined score, or everyone flunks out. Likewise, four of the five members must participate in the practical exam. The player chooses who will do what, but runs the risk of failure depending on who is picked to accompany the resident genius to the testing room. Of course, choosing to take the test oneself is hardly better. It is ten questions of trivia on the game’s canon with a five minute time limit. All the answers are available in-game, but finding them will take a great deal of reading on the player’s part. Cheatsheets exist on the internet, thankfully. 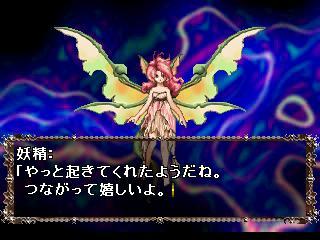 Any story that begins with cute fairies is a good story, really.

One might expect the field practical exams to be simpler, but they aren’t. Each comes with a requirement or limitation. In several, the strongest member of the party is nerfed or otherwise removed from play. In one, the entire party is poisoned and then given exactly thirty minutes to gather the antidote ingredients. The most annoying would have to be the “escape tactics” practical, where Dike & co. must make their way down and out of a tall, complicated tower without killing a single enemy. The game’s high encounter rate does little to help with those last two.

Combat is interesting. While the overall format is similar to many RPGs from the ’90s, Dragon Knights Glorious includes a mechanic for linking attacks across rounds. Each character has access to three basic attacks: overhand chop, side-slash, and stab. The next round after using one of these, a special attack is unlocked — but only for that round. So Dike can slash at an enemy on his first turn, do an aerial slash on his second, and on the third unlock a powerful attack that hits all enemies for a sizable chunk of health. Each character has multiple chains of attacks they can string together, but very few battles last long enough to make good use of them. The only real boss battle occurs in Chapter 4, very near the end of the game.

On Sundays Dike can go into town, either alone or with a squadmate. This time can be used to work on character relationships, work part-time jobs (i.e. mini-games), or do research at the Dragon Knight’s fan club, where most of the test answers can be found. The game fails to make any use of the other days of the week, which could have been used to further the plot with rival students or have free-battle periods to make the practical exams less onerous. 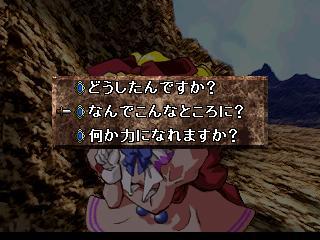 Just one of many potentially life-changing decisions to make.

Most of the game is shown in illustration, with character scenes enacted before various backdrops. Bold colors and a strong mid-’90s manga style make many of these scenes memorable. Dungeons include traditional RPG spritework that looks nice for what it is, but it still looks dated for something that was made in 1999. Monster designs are likewise good, but somewhat generic except for the use of combat animations.

For some reason, the developers at Pandora Box chose to forego the use of an in-house composer and instead outsourced most of the music to the 19th century. Frederick Chopin and Erik Satie in particular are named in the closing credits. Dragon Knights Glorious has no voice acting, and that’s probably for the best. While it might have served the game well, the amount of dialogue text would have made the game much longer than the eighteen-or-so hours a normal run might take.

Seriously, there is a ton of text in this game. All of Chapter 2 and most of Chapter 4 is taken up by narrative and dialogue. Chapter 3’s written tests alone would have made this a difficult title for importers. Even the discovery of a treasure chest after battle is worthy of a paragraph of narrative describing it and introducing any possible traps. Seeing all twenty-five endings, good and bad, will require a ton of reading. A strong grasp of written Japanese is imperative for anyone who wants to try this game. 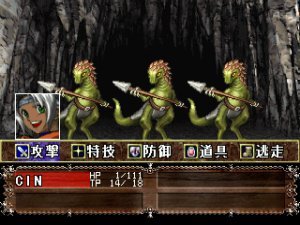 For all its faults, it’s obvious that the guys at Pandora Box put a lot of effort and heart into this game. As it is, while Dragon Knights Glorious has the makings of an interesting game, it feels incomplete. The RPG sections in particular could have been expanded upon. I’m still interested in their other games, though. It would be nice to see some of their work in English, but it seems the last game of theirs to leave Japan was Xenomorph for the Commodore 64 et al. in 1990. I think I’ll just stick to their PSX library for now.