For some reason, there are gamers out there that detest iOS gaming. Whether out of annoyance of the often-horrible control schemes or out of fear that the casual iOS market will crush more traditional gaming, it is hard to say, but it’s a sentiment seen often. For me, I had not really spent much time with the iOS as a gaming platform because most of the titles I had an interest in were either ports of things I’ve already played or had irritating controls that made playing too much of a chore. I have a massive number of games on my iOS device, many of which have come highly recommended, but I never cared enough to keep at them for long. Or at least that was true until I started playing Dragon Fantasy.

An indie game from Muteki Corporation, Dragon Fantasy is a turn-based RPG divided up into three main chapters. The game is a retro love letter to the original Dragon Quest, from the visuals to the battle system. The first chapter stars Ogden, a knight forced back into service after an attack by the evil dark lord. He fights valiantly, but ultimately ends up defeated and teleported to the middle of nowhere where his quest begins. Ogden’s adventures send him on a tongue-in-cheek quest all across the world in an attempt to recover the hero’s armor, save a prince, and defeat the dark lord. It’s a fairly simple, straightforward trek very much in the vein of the first Dragon Quest, but it offers more humor, great pacing, and a main character that actually talks.

Gameplay is a throwback as well, as Ogden is alone on his adventure. In battle, he will only face a single enemy at a time with the player selecting options and then actions playing out based on a speed rating. The game does a good job of balancing the challenge, though there are points where grinding is helpful. Ogden is not just a simple melee character; he gains a variety of healing, debuff, and damage spells as well. In the other chapters, characters are also a varied bunch with a mix of swords and sorcery available to them. 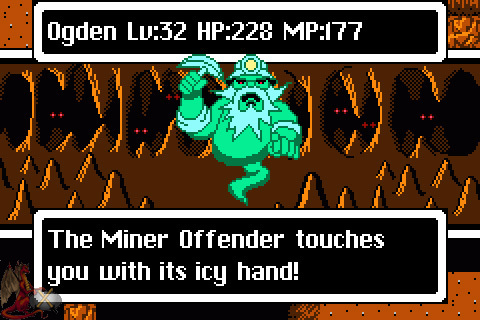 He swears it was a misunderstanding.

Enemies also mix up melee and magic, and the mages can be very damaging, especially further into the game. Thankfully, the penalty for death is only a quick trip back to the last church or save point visited, though players will lose half of their gold. Though there is no bank to store funds in until the third chapter, this can be offset by purchasing golden swords that retain their value when sold back. Basically, all of the familiar and useful features from Dragon Quest are here, even spells for fast-travel and quick dungeon escapes.

The whole of the first chapter feels like a complete experience all on its own. It wraps things up quite nicely, but still leaves room for more. The second and third chapters of Dragon Fantasy are also self-contained and bring on a different cast for each. It’s easy to see the progression taking place over the development of these chapters. Chapter two introduces multiple party members, and chapter three expands from battles against a single enemy to multiple foes being the norm.

The second chapter is relatively short and offers little development, but is a decent supplement to the story and helps ties the plots together. The third chapter takes the story even deeper and off in a whole new direction while at the same time tying it back into the plots of the prior two. This is an example of where episodic development has been very beneficial to the overall product, instead of feeling like the game was simply being pieced together. Muteki is going for a larger story arc, but has made each chapter unique, yet complete. 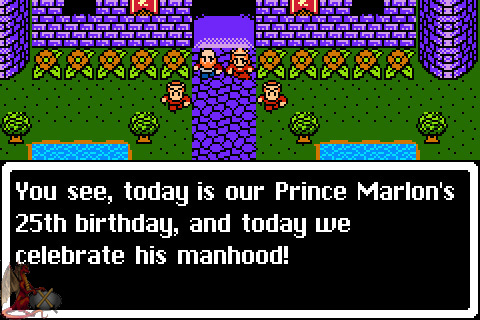 Even more impressive, and telling of Muteki’s development progression, is the bonus chapter Intermission M. It’s a brief quest with a Minecraft-twist, as it has players seeking to help Minecraft creator Notch recover his magical Swedish hat. Players can mine resources and craft new items from them, and there is even an option to recruit monsters as party members. Considering this was only meant to be a demo for a Minecraft convention, the fact that it offered brand new dynamics in the gameplay was totally not what I expected from a bonus chapter. And since having a creeper in the party is never a bad thing, this was one of the more enjoyable parts of the game.

The 8-bit visual style might seem off-putting to some, but the character designs still hold up pretty well. The monsters laden with pun-filled names are fairly diverse, though there does start to be some repetition across the three main chapters until Intermission M brings some unique twists. The music and sound effects are solid, though not a major focus of the title. Overall, the presentation is very retro, which is fitting of the game, but does little to make it stand out.

Dragon Fantasy is also available on PC and Mac for those without an iOS device, and it is cheap, so there is little investment required to try it out. For the most part the game controls fantastically, as simply swiping the desired direction on screen will send characters that direction, and tapping on the screen accounts for interactions and battle selections. There are a few minor nitpicks with the design, such as not being able to sort inventory or to go back after having selected a command when in a party, but they are negligible. Muteki also recently revealed Book Two with a new 16-bit look for later in 2012, so if the developers can continue to evolve that game’s development the way that Dragon Fantasy does across its three and a half chapters, the sequel will be something to look forward to.

Dragon Fantasy has the distinct honor of being the first iOS game I’ve ever felt compelled to play. While that might seem like a backhanded compliment, the game’s simplistic design and controls are executed almost perfectly on the small, mobile device. While not the most original of games in the first chapter, the growth shown as the game goes on is exponential. Dragon Fantasy should not be dismissed as a Dragon Quest clone, but instead should be embraced as a game that takes all the greatness of the older games in that series and wraps them up in a nice, new format for a whole new generation to enjoy.