The Dragon Age series has only been around a few years, but it’s already experienced dramatic shifts in quality. Dragon Age: Origins was a massive game that offered one of the deepest role-playing experiences I’d ever played, and its expansion, Awakening, was a very beefy addition with a new cast and a brand new story to enjoy. Not long after that, Dragon Age II was rushed out the door with lots of recycled environments and a much more scaled back setting, all of which seemed to be directly caused by a hurried development process. Thankfully, Dragon Age: Inquisition was given all the time it needed, as it’s a massive game with tons of entertaining content that makes it really hard to put down.

After the player creates a character from a selection of four races and three classes, this would-be hero is tossed right into the mix during the introductory section. The player is the only survivor of a huge explosion that devastated a delegation of mages and templars and as such is being accused of being complicit in the massacre. A giant rift has been torn in the sky and demons are pouring out of the Fade, and the main character has a magical gift to close any rifts that open. Cassandra and Varric from Dragon Age II, along with newcomer Solas, have been examining and interrogating the player’s character about the event, but with no luck. When the breach in the sky starts to grow larger, the group of four join up and go to investigate the source of the accident to start the story.

This intro section is meant to help players adjust to the battle system, but actually ends up being a little overwhelming as there’s a lot going on without adequate explanation. Once the game gets rolling, Dragon Age: Inquisition changes things up by moving from fairly linear, mission-focused areas to open world regions with lots of optional side quests to undertake. These areas scale very well, offering as much or as little to do as players please. It’s easy to get caught up doing every quest that comes up, as completion of each quest will earn the group power points and influence over the area. Thankfully, only a few quests at a time are needed to obtain enough power points to access new missions. When exploring these large areas, the area map highlights key locations and objectives while allowing for fast travel between camps that have been found along the way. Fast travel works really well, as not only can players quickly jump between areas within a map, but it’s similarly easy to jump to camps in other regions across the world. 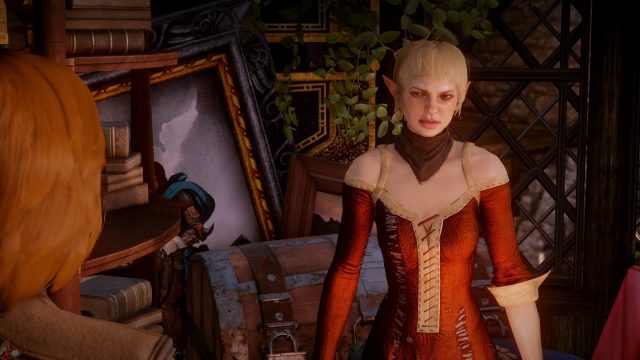 I love Sera, but I’d probably have to censor her dialogue.

New missions and additional areas to explore are unlocked through the war table at the player’s main hub base. Opening new areas happens through the use of the aforementioned power points gained during quests. At the war table, players can send one of their three advisors on missions to gain resources or to open new paths within a previously visited region. These missions take real-world time to complete, so whether an undertaking is going to take fifteen minutes or twenty hours, players don’t have to leave the game running. While not as interesting as doing these tasks directly, this adds a useful meta layer to the game’s resource gathering and progression process.

Whether in a mission or just roaming around the world, combat is a big part of Inquisition, and it is both chaotic and enjoyable. Early on combat feels limited, but things become much more entertaining as new abilities and specializations become available. Players get to decide the development path and equipment selection for their character and all party members, so there are a lot of decisions to make. Actions in combat are fast with buttons mapped to different attacks and skills, and it’s very easy to tab between characters to control different people as needed for the situation. There’s also a tactical mode that allows for commands to be entered while viewing the entire battlefield, though combat is a bit too frenetic for this to be as efficient as one might hope. Since battle is very fast-paced, it’s time consuming to have to micromanage four party members, so the game gives players the ability to decide which skills should be used more often and which should be ignored. The whole game feels like a much improved version of what Dragon Age II was trying for, but with more options and open exploration.

There are a few questionable decisions in the interface and combat. One is the use of healing potions instead of having a healer in the party. While a move away from requiring players to have one character focused on healing is understandable, only having a limited supply of shared potions for the party can be frustrating. Healing potions are automatically restored at camps and at the rare supply crate in the field, but other consumables must be created using the game’s massive crafting system. Another problem is the limited inventory system, but it shares typical problems of micromanagement and storage space that have plagued many an RPG before this. Issues aside, combat is easy to get into and the party AI does a decent job of helping out during battles, though it does take some time to come to grips with all of the options available. The crafting and modification systems are fairly involved for both weapons and armors, but the game can easily be completed using items found naturally throughout without ever crafting anything. 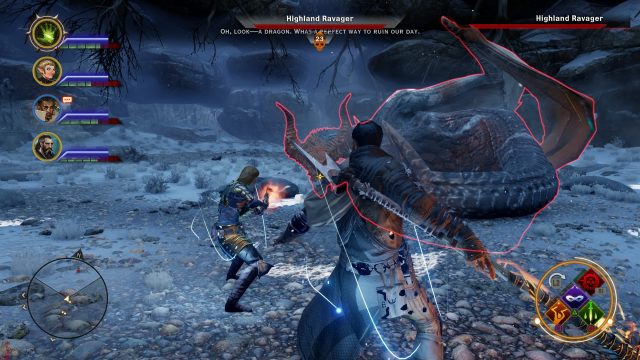 Dragon Age actually has dragons! Lots of them!

Inquisition is another example of BioWare’s ability to create a wonderful and diverse cast of characters. There are some in the group who stand out early on, but by the end of the game everyone has their place. The best part about these characters is that they are all more than what they seem initially. The player’s companions offer frequent vignettes to allow for a deeper look into their backstories and motivations. These are spread out over the course of the game’s fifty or more hours, and help make even the seemingly boring characters more interesting by the end of the game. This is a fantastic cast with a ton of depth, though it might not seem like it from the start. Once new characters are recruited and side quests are explored, everyone grows and develops nicely if the player takes the time to get acquainted. If at all possible, the characters are best experienced in-game without prior knowledge.

One thing Inquisition does seem to lack, in comparison to Origins at least, is the feeling that decisions matter to party members. Characters frequently agree or disagree with choices that are made, but it doesn’t make them behave much differently and none of them left due to these personal conflicts. It might have just been the decisions made during this playthrough, but even characters that were in constant disagreement hung around and were cordial the entire time. Romance options are handled really well in Inquisition, as players can flirt with any character and those advances might be rebuffed or awkwardly questioned if the character is not attracted to the hero.

As for how the game looks, the PlayStation 4 version is quite smooth and runs fairly well in action. There are occasional moments of noticeable framerate stuttering during some scenes, but it’s never too bad. Any such problems are offset by the beautiful environments and the lovely character designs, though every character seems to have plastic, shiny hair. Armor and weapon design are very creative and adapt to each character quite well, as players customize the equipment of all of their party members. 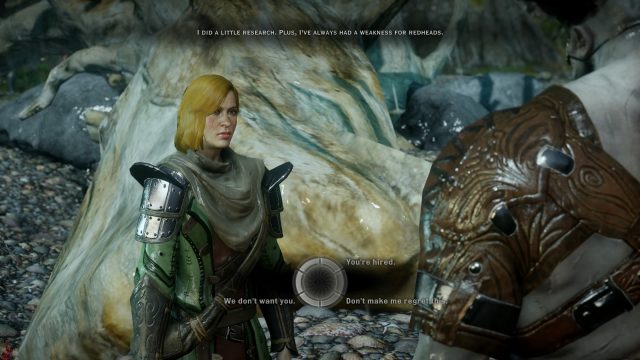 Like many western RPGs the music is more subdued and acts as background accompaniment, but the soundtrack for Inquisition stands out as a memorable one, from its opening theme through the ending. As for other audio, character dialogue is fantastic across all characters without exception. The only disappointment is that the increase in party members available results in less frequent in-game banter, which is only a shame because it’s wonderful to hear all the back and forths the party members have. The voice acting as a whole, though, is just fantastic and is complimented by a wonderful soundtrack.

Outside of the game itself, there are a couple of features worth mentioning. The Dragon Age Keep is an external website where players can import and adjust their choices and information from the prior games to use in Inquisition. It’s an easy to use tool to help players who experienced the older games on other systems bring their choices into this one, which is handy because past decisions are encountered frequently throughout. There is also a multiplayer mode, but unlike in Mass Effect 3 it does not impact the single-player story. It’s an interesting addition that could likely add many hours of play, but is completely separate from the main game.

Dragon Age: Inquisition starts off as a good game and keeps getting better as it goes along. This doesn’t mean the early parts are insufferable, but instead shows how the game continues to build and develop throughout its entirety. The side content can easily become overwhelming, but it’s important to note that most of it is completely optional. That said, it’s easy to get caught up exploring every area, closing every rift that’s encountered, and hunting down the elusive and powerful dragons. Combine all of that with a lore-heavy story, an outstanding cast of companions, a competent villain, and a mysterious epilogue, and you have one of the most engrossing games of the year. I couldn’t put down Dragon Age: Inquisition and tried to squeeze every bit of content out of it that I could. It’s a fantastic experience that rockets the series right back to the top of the list of great RPGs, and I’m already getting ready for another playthrough.