An Education in… Something

Though sports games have spent recent years implementing more RPG-like mechanics, dedicated sports RPGs are still relatively rare, with Inazuma Eleven and Golf Story as notable modern examples. However, developer Pocket Trap has added to that list with Dodgeball Academia, a title bursting to the seams with a Saturday morning cartoon charm. While the light amount of content betrays the fact that the gameplay likely lacks enough depth to carry it much further, it nonetheless provides a ten-hour story with enough humour and speedy battles that make the time fun.

Dodgeball Academia follows the exploits of Otto, a new student at the eponymous school, where champions of the future are instilled with the necessary abilities and knowledge for all things dodgeball. After joining in the opening ceremony — where he receives some powers from a fabled relic of the past that still powers the academy to this day — he signs up to the school’s prestigious knockout tournament. First things first, however, he needs to find some team members, but fortunately his new roommate Balloony has some ideas for potential recruits.

The story campaign is confined to the school grounds, though these grounds do include a forest and a mountain. The tournament is the main driving force of the story, but the game takes an episodic approach where the chaotic happenings around the school provide other issues that must be dealt with. It very much feels like one is playing a cartoon, with appropriately silly hijinks and plenty of humour, including some fourth-wall-breaking. It’s not a deep plot and there aren’t any major themes that the game tries to attach to events, outside of a general “don’t be a jerk” vibe, but it provides more than enough of a fun factor to keep players amused. 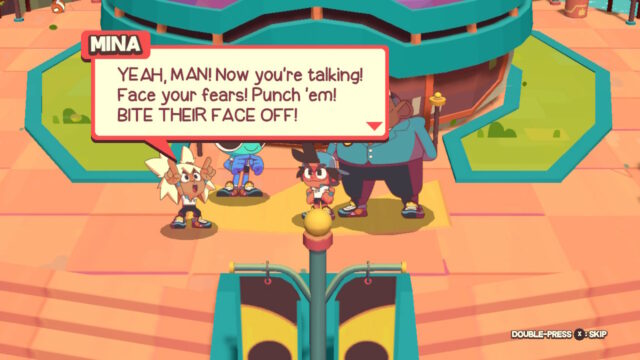 Some characters need less motivating than others.

Dodgeball Academia ends up giving players six playable characters in the campaign, with a few more unlocked for its local versus mode. Dodgeball battles are an adaptation of real world dodgeball rules, for participants are only eliminated when they run of out HP rather than just a single strike. Proper matches are three-on-three, though the game’s story battles can bypass that limit, with eliminated participants able to stay involved by roaming the back of the opponent’s court and using any balls that fall to them.

Players have direct control over one of their three active party members, with the other two following them around the court ready to be passed to when required. Players can utilise a few basic types of throw, as well as a charged throw, the effect of which varies between party members. Different party members also dodge and counter-attack in a different manner — Otto jumps and catches balls, while Mina rolls out of the way and kicks balls straight back at the opponent — and each also has a unique Balltimate move, which can be unleashed when the dedicated meter is filled, most effectively through successful counters. In addition, as long as there is a ball on the opposition’s side of the court, players can attempt a special charge, the effect of which is again dependent on which character is active. 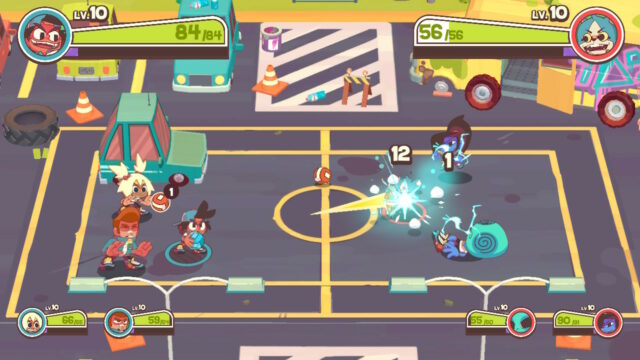 I’m trying not to quote a certain movie, but when you get battles like this…

It would be a lot to take in at one go, but Dodgeball Academia does a good job feeding the individual elements in. The dodgeball portion of the game is very speedy and a single battle will rarely last longer than a minute or two. The action is enjoyable, but players have little reason to deviate from the same basic strategy. Some challenges provide an exception and can be annoying at first because of this sudden change, but it becomes apparent that they are geared at trying to teach players their ideal method of completion. Meanwhile, certain Balltimate moves are much more effective than others with Otto’s feeling particularly overpowered in combination with his charging ability. The game tries to keep things fresh by introducing special balls that can apply status effects as well as new opponent abilities and throw types to challenge players. It also includes special courts with environmental hazards, but these feel gimmicky rather than deep.

Between battles, players will be rushing around. Rather than having a sprinting option, though Dodgeball Academia lets players roll quickly. It’s something a bit different at least, though going around corners is a bit tricky and it’s very easy to crash into things, albeit with no penalty other than the cessation of movement. There’s a bit too much forcing the players to go back and forth, which is especially annoying in the forest sections as for most of the game the quickest paths are blocked off. The game includes one or two sidequests in most episodes, which provide a few extra battles or challenges.

Character customisation is limited to two equipment slots for items that provide bonuses such as healing a percentage of all damage done or boosting a character’s strength attribute if they stay in the middle of the court, which can prove very useful. The party gets experience with each battle, and there’s a straightforward levelling mechanic. As combat is quick, it’s worthwhile to engage in as many battles as possible just to maximise the experience and money one receives during the game; the biggest use players will get out of money is buying some additional equipment items or permanent stat-boosting juice, but otherwise the items picked up during quests will more than suffice. 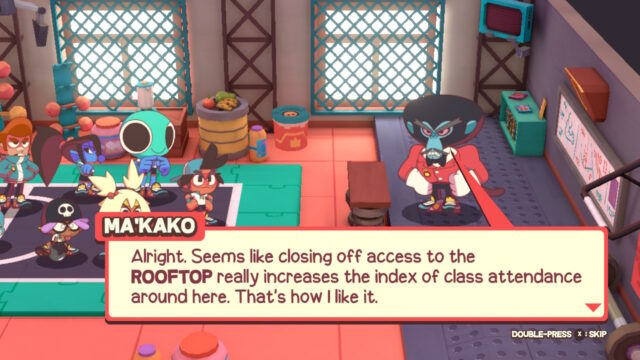 The fact that the classroom is a dodgeball court speaks volumes about the lesson matter.

The graphics are very much part of the game’s Saturday morning cartoon feel, but they’re a perfect match with the writing and overall feel of the game. While there’s a question as to whether some of the characters are meant to be human or not, the game makes it easy to throw such concerns out of the window and just enjoy the colourful visuals and animations, with each character being distinct and memorable. There’s very much a Pokémon-esque feel to the audio, which offers some catchy albeit repetitive tunes. The game doesn’t include voice acting, but all of the sound effects are solid.

Dodgeball Academia breaks off at an appropriate point and leaves a good feeling behind; there’s enough about the game to enjoy its content. It successfully evokes the feelings that come from watching fun cartoons, though on the gameplay side it feels like it would benefit from having more standout and extended matches as regular encounters towards the end because it felt like they were mostly making up the numbers. There’s definitely scope available for Pocket Trap to build on what it has created here, and I’d be very happy to see it do so.