Dissidia 012 is a tough game to review. In short bursts it can be quite fun as a good, though not great, portable fighting game. The various aspects generally work well, but the game’s primary single player mode seems designed to show its worst aspects as effectively as possible. Still, though sometimes in spite of itself, Dissidia 012 remains an enjoyable experience all told. It’s just a shame that the ideas it presents aren’t as well done as they could be.

Dissidia 012‘s most salient aspect is of course its unique combat system. Fans of the original should feel right at home, but for those who aren’t already familiar, the system works like so. Attacks are damaging to either HP or Bravery, and an HP attack’s power is the same as the fighter’s current Bravery. Fighters play tug-of-war over Bravery to avoid taking huge swaths of damage. It’s a unique system that sets Dissidia apart from the fighting game crowd. The environments the fights take place in are large, but the characters are well suited for traversing them and the battles are thus able to retain a nice zippy speed. The unfortunate downside to this is that characters seem distinguished less by unique movesets allowing for different tactics and more by how well they can pull off the same tactics. While some can run and dodge slightly faster or have higher base damage totals, they all have to be able to traverse the game’s environments. Since so much of the battle system is about the positioning and movement factor, individual characters stand out less from the crowd. 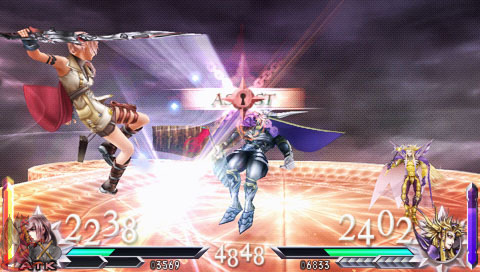 Lightning responds to Cecil’s defection the same way she reacts to everything in this game, attacking and looking moody.

The game’s biggest problems are most obvious in the game’s Story mode. Story mode is a cool idea (traditional RPG trappings such as a world map and later a party to go along with the plot) that utterly fails to entertain in execution. The mode is structured in chapters which give you a character or a set of characters and has them traverse through a small world map before going onto a grid to start battling. The length of each individual chapter is a primary fault here. Thirty minutes to an hour, encompassing 8-15 compulsory battles (in order to keep a character properly leveled), is too long and serves only to shine a glaring spotlight on how repetitive combat is. While this is natural for a fighting game, most good ones aren’t meant to be played against the CPU for long periods of time. Story mode also encompasses the majority of the game’s superfluous RPG elements. Level is exceptionally important to how a fight plays out, so if the level of the player and the CPU are at all out of sync, it becomes a carefully waged and incredibly unfun war of attrition on the player’s part. There’s also a certain unpleasant sort of homogeneousness to the fighting. While there are nominally a fair number of equipment combinations available to the player, there’s little actual strategy in outfitting a character and it all feels very perfunctory with less than obvious benefits. The oddly long time investment to make any real progress in story mode makes it uniquely unsuitable for portable play.

The gameplay modes outside of story mode are all fairly conventional but, do a better job of working in a portable context. Between arcade mode, an achievement-ish system, and a load of unlockables in the in-game store, there’s a lot to keep players that enjoy the gameplay coming back. These modes generally work on a more “couple of minutes at a time” level that is befitting for the nature of a portable platform and deemphasizes the samey nature of individual fights. This is, of course, not even factoring in the multiplayer mode.

The actual story part of story mode is… just bad. The story itself is on the order of FF1 in terms of complexity, but is poorly told and somewhat hard to follow given the tendency to jump perspectives every time anything of consequence happens. There also isn’t a lot of drama given the nature of the story as a prequel, and the cutscenes are unnecessarily chatty. While not an incoherent mess, it’s at best only mildly interesting and the characterization has a sort of fan fiction-esque tendency to latch onto one part of characterization and expand that such that it makes up the whole of a character’s interactions with others. Not helping any of this is the inconsistent quality of the voice acting. Some characters do very well while others (such as Hedy Buress’s ever wooden Yuna) fail to save the lines they’re given. 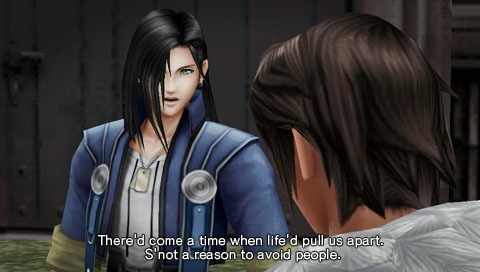 Yes, it’s an old joke but, cheer up emo kid.

It’s a cliché by now to say that Square Enix puts out some of the best graphics on any system it works with, but as always it bears repeating: the graphics are excellent. The large environments are often destructible and the framerate is pretty much perfect. On a technical level there’s really nothing bad to be said about the game. As is to be expected from a Final Fantasy spin-off it also has a very nice soundtrack with the series’s battle themes being obviously quite prominent. Aside from the already mentioned voice acting, the only knock against the sound is the profoundly irritating filter random encounter enemies have their voices put through. It’s not enough to drag down what is overall a very solid package from a presentation standpoint though.

Dissidia 012 is a frustrating game. The fundamental parts are quite solid, the graphics and music showcase Square Enix’s usual excellent craftsmanship, and the fighting system remains fairly unique even if the game isn’t exactly innovative compared to its predecessor. It bungles a lot of the ancillary features though, and some of the flaws seep back into the core of the gameplay. Regardless, Final Fantasy fans will enjoy the game as it adds a fair amount of content to the original Dissidia and even includes the entire original game after completing the main story. If you are able to look past the flaws of the story mode there’s a solid enough portable fighting game there, but for most it’ll be best left as mere Final Fantasy fanservice.