Disgaea 5: Alliance of Vengeance is the latest in Nippon Ichi’s venerable strategy RPG series. The first entry on the PS4, it feels like the developers wanted to make an impact for their debut on a new console. Sadly, despite a brilliant, entertaining, and fresh story, Disgaea 5 is a major step backwards in terms of gameplay. Bad level design, coupled with some odd design choices prevent the game from reaching excellence. Features from previous entries that are strangely absent only serve to further expose these weaknesses. It’s certainly not a terrible game, as it has intricately deep systems and optional content to explore, but there’s also too much tedium involved for the game to really shine. Sadly, players will be interrupted by too much tedium to fully enjoy the best parts of the game.

The story, at least, is fantastic, and leaves very little to complain about. Taking place in a universe with many demon-filled netherworlds, the story begins with an extremely powerful overlord, Void Dark, waging war on all other overlords. It’s in this struggle that players are introduced to Seraphina, an overlord in a hopeless battle against part of Void Dark’s army. She is saved by a seemingly very powerful demon called Killia, who shows up in the middle of the battle eating curry before swiftly dispatching all enemies. Somewhat unwillingly following Seraphina along, the two begin a quest for revenge against Void Dark. From there they meet other demons and overlords looking to take down Void Dark and form a rag-tag rebel army.

The plot includes tons of goofiness and never takes itself too seriously, and yet still manages to be poignant. The characters in the rebel army grow and become closer as the game moves along, so that when the story reaches its satisfying conclusion the characters feel like they have a real bond. They never feel like a bunch of stereotypical anime tropes thrown together for laughs. The localization does a fantastic job with the story as well, giving each character lots of personality, even stylizing some after famous wrestlers, but not in a way that only those who know the reference would get. It’s a fantastically entertaining story that stays for the game’s long, eighty-plus hour length. 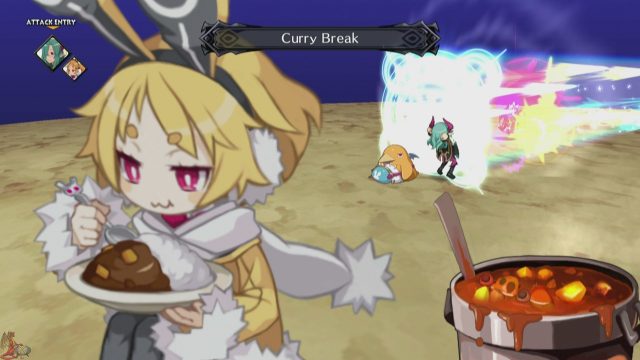 You’ll need plenty of curry breaks to make it through this game.

What helps keeps things on track is how the story flows. In previous Disgaea games, all story sequences happened before and after battles, as well as at the start and end of chapters. In Disgaea 5, only crucial plot-related dialogue occurs before and after battle. Non plot-focused dialogue gets relegated to optional conversations that players can view while in the home base. This allows goofy side conversations their own space that doesn’t disrupt the game’s flow, making major plot scenes feel more focused and interesting. It’s a small change, but one that does great things for the game, and hopefully will be used in future iterations.

Disgaea 5, at its core, is a typical Japanese-styled strategy RPG playing similarly to games like Final Fantasy Tactics and Tactics Ogre. What sets it apart is the way its mechanics allow the player to “cheat” or simply overpower characters and gear for those who wish to put the effort in to do so. There is even a cheat shop that players can unlock, which  allows for manipulation of various aspects of the game. For those who wish to ignore these aspects, much of Disgaea 5 is typical of a deep strategy RPG. There are various classes players can create characters as, with more unlocked by getting characters to certain ranks in existing classes. In addition to class-based abilities, characters also learn skills from using the weapons in the game. Though these skill are independent of any class, each class has an inherent affinity for certain weapons. This allows for a lot of customization for the player’s party.

In addition to player created characters, story characters get their own set of skills unique of any class. This makes these characters feel distinctive so that they are worth using in addition to player creations. The problem comes as the story characters learn their overlord skills. These once-per-battle skills are available when a character’s meter fills up due to them or their allies taking damage. The skills on many of the story characters are absurdly powerful, to the point where later battles in the game feel balanced particularly for their use. This can take a lot of fun, choice, and strategy out of a player’s hands, turning these battles into an exercise in using these overlord powers most effectively, with the rest of the party being only minor players in the battle. Trying to beat the game without their use would take a massive amount of grinding, which is problematic unless a player specifically is overleveling characters. Disgaea 5 already requires a massive amount of grinding to complete.

What makes this most disappointing is that the developers have injected new strategic elements into battle, which are a nice touch before the super abilities get out of hand. Previous Disgaea games would give enemies weaknesses and strengths against the three elemental attack types, which were important to keep aware of. In Disgaea 5, this has been expanded to include a fourth kind of magic and weapon type weaknesses. Now players will not only have to consider the elemental type of the attack they want to use, but also if the enemy is strong or weak against the weapon they’re using. To help with these new elements, characters can now equip a sub-weapon and a sub-class. This allows characters to have a bigger set of skills, and a backup weapon in case all the enemies are strong against their primary weapon. These elements feel a bit underdeveloped, since they don’t actually do anything outside of giving characters a larger skill pool, but they are welcome with the new strength/weakness system nonetheless. It’s just a shame they get undermined later in the game by the overlord skills. 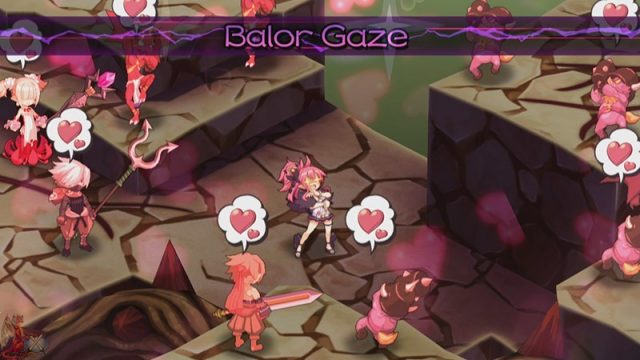 Overlord powers such as Seraphina’s are absurdly powerful.

The game’s one big flaw, sadly, is level design. The vast majority of stages in Disgaea 5 are unremarkable, with very little in the way of interesting terrain to consider. Past Disgaea games have heavily used an element called geo-panels. These color-coded panels would have various effects on units depending on the type of block on the color. These include increasing the power of enemies and causing instant death to any character ending their turn on the designated panels. These made many stages very difficult to navigate, and provided depth to battles beyond simply taking out the enemy team. While geo-panels are in Disgaea 5, the instances where they require any thought or can’t easily be ignored are exceptionally rare. Stages in some netherworlds have new effects seemingly to replace this feature, such as one where mushrooms will spawn each turn causing various effects. These are rare and more of an afterthought, though.

This flaw rears its head the most in one of the series’ biggest feature: the item world. The item world allows players to go through a series of randomly generated battles to increase the power of weapons and other items. New to Disgaea 5, the player can decide what type of upgrade is most relevant by choosing different paths. This is a useful feature, though it is counterbalanced by another strange design choice. In previous games, players could simply get to the exit for any stage in the item and still gain a level for the item despite doing so. Now, no bonus is given for any stage unless the player defeats all enemies therein. This makes the item world especially tedious when one takes into account the level design issue. Some fun stages do occasionally pop up in the item world with a crazy variety of geo-panels, but they are few and far between. Rare events such as invasions by powerful enemies, another classic element of the series, also seem somewhat less frequent, and would have helped spice things up.

From an audio/visual front the game doesn’t have much to complain about. Sprites and locations look a bit nicer than on PS3, and the game uses lots of interactions and animations between characters’ sprites in addition to the talking portraits regularly used in most JRPGs. Animations for spells and attacks are interesting and fun, but can be quickly skipped after the first viewing if the player desires. Nothing here exactly pushes the PS4 to its limits, but everything is smooth and crisp. Music fits battles well, and some vocal themes are included as well that help mix things up. Not all the tunes are particularly memorable, but it’s all enjoyable and many of the tunes will stick with players, particularly the fun theme that plays in the home base between battles. The series isn’t really known for its music, but it has been improving over the years and Disgaea 5 continues this trend.

When it isn’t being a frustrating game, Disgaea 5 can be a lot of fun. Once things slow down to grind, however, the story may be the only thing that will keep players going. All the pieces are here for a fantastic Disgaea game, but thanks to some odd design choices and the awful level design, it never comes together. The long length of the game only exacerbates these problems as well, especially considering the extra grinding that is required just to make it through the main story. There’s certainly hope for the future of the series, especially giving the great story Disgaea 5 contains. However, those looking for the series to make a big splash on current-gen consoles will be sorely disappointed. These aren’t the prinnies you’re looking for, move along.