Originally released on the PS3 in 2008, Disgaea 3: Absence of Detention is a port of the third entry in Nippon Ichi’s venerable Disgaea series. Boasting all the downloadable content of the original game, new character abilities, and new features, it looks to fill the RPG void of the young system. Sadly the new Vita-specific features are quite inconsequential, and the original’s lackluster battle sprites and environments have not been updated. Thankfully some tweaks to the gameplay keep the game’s humorous story interesting, even for longtime fans.

Disgaea 3 is a traditional turn-based strategy RPG with the simple goal of taking out all the enemies in each battle. Players deploy their characters from a base spot, and combat moves between player turns and enemy turns. What makes the Disgaea series, and Disgaea 3 in particular, different from other games of this type is the way in which the various environments affect the flow of battle. In the vast majority of battles there are special portions of the 3D environments that provide certain bonuses or penalties such as reversing damage or boosting enemies. Interacting with these elements, and moving or destroying the blocks that create the effects, is a huge part of the combat. Disgaea 3 uses these to create a variety of interesting and challenging maps, surpassing the quantity in previous entries in the series.

As for party members, there are a number of story characters, and the player can also create his or her own. Characters learn new abilities by purchasing skills with points earned through battle in addition to learning new special skills as they level. In the PS3 version only story characters and the game’s special monster classes gained class skills by leveling up, but now all classes gain new skills this way. In addition, the Vita version now features powered up versions of skills that activate when they are used by characters with very low HP. Enemies can also use these, which puts a nice twist on battles for Disgaea veterans. Unique to Disgaea 3 is the ability to combo special attacks. It’s a nice feature that makes it easier to level characters, but unfortunately it is a bit unbalanced. Certain attacks can’t be used in combos, including magic, which makes it very hard to level mages in comparison to other character types. 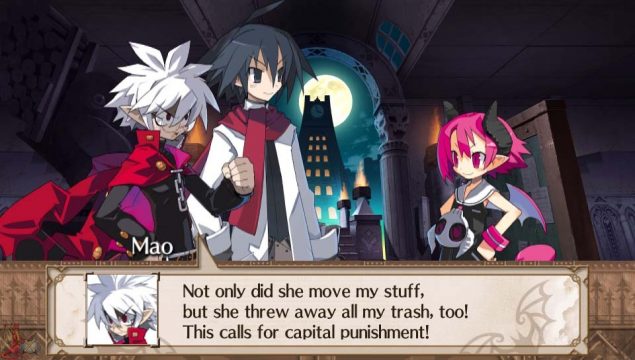 Story scenes now have a lot more life to them.

As previously stated, the visuals are very lacking. The character sprites look like they’d easily be at home on the PS2 Disgaea games, and many of them are likely reused from that. Environments are more expansive and detailed, but still look quite plain. This was the biggest issue in the original version, and it remains here. The graphics give the illusion of being improved, but this is simply a matter of a smaller resolution. There is one improvement in this department, thankfully.  In the original’s story scenes, character portraits were static, occasionally switching to different positions. These portraits are now fully animated, similar to Disgaea 4, and it adds a very nice touch. It’s a shame the same care couldn’t have been applied to the rest of the visuals.

Although the music’s technical quality is weak, it sounds merely forgettable at its worst. There are a number of memorable tracks, particularly the upbeat vocal track that plays while maneuvering around the base area. The voice acting is some of the best in the series, perfectly fitting the humorous style of the game. There is a small sampling of sound effects in battle, however with characters and enemies throwing out battle cries with each attack, the lack of variety is rarely noticeable. 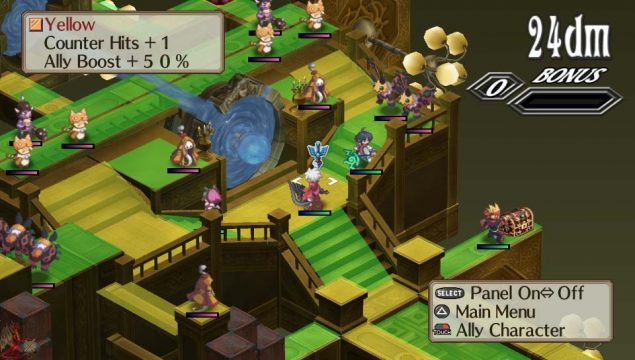 Terrain is a constant worry in Disgaea 3.

The story in Disgaea 3 is the best in the series. It follows Mao, the son of the demon overlord,  as he looks to defeat his father. The basis for this attempted patricide is the accidental destruction of Mao’s game system after it is stepped on by his father. This sets the stage for an incredibly goofy and fun adventure as Mao and frenemies adventure through the underworld’s version of school. Though it reuses a lot of themes the series is known for such as the opposite evil nature of demons, it manages enough originality so as not to feel like a retread from previous entries. This version includes the additional epilogue story starring Mao’s friend/rival Raspberyl which was originally released as downloadable content. The Vita version includes some additional story sequences aside from the Raspberyl scenario, providing some new story content for those who have already completed the original.

In the end, Disgaea 3: Absence of Detention is a fine port of the PlayStation 3 original. It tweaks the gameplay in interesting ways, and improves the look and feel of story sequences. It’s not all great, as the gameplay graphics have not been improved from the original, and the added Vita touch controls and GPS functionality to get minor bonuses are largely pointless. With a lengthy story, additional post game challenges, and the many optional endeavors present in a Disgaea game, it still makes for an exceptional package of content.