A Trip Down Netherworld Memory Lane

After trying a lot of new gameplay additions and alterations with games such as Phantom Brave and Makai Kingdom, Nippon Ichi Software finally decided to revisit the success of Disgaea with a sequel. Disgaea 2 is centered around Adell, a heroic youth, and Rozalin, the spoiled daughter of the powerful overlord Zenon. Though it doesn’t exactly star the cast from the first, there are a large number of cameos, both from Disgaea and other Nippon Ichi titles. Also, the story may focus on a good guy this time around, but there’s still plenty of demonic plotting going on behind his back.

Needless to say, all of that plotting forces Adell and his less-than-just companions into quite a few battles. These skirmishes are fought tactically, with up to ten party members being able to fight at once. In addition to the usual commands, party members can form multiple types of combos, throw characters around for a tactical advantage, and use a few new surprises when certain conditions are met. There are also geopanels, special panels that take on various special effects, which often have a large effect on battles. These special effects include raising the power of those that stand on the panels, preventing entry, or even warping those that stand on the panels around randomly. While this battle system isn’t the greatest or deepest around, it’s still a fairly enjoyable one.

Unfortunately, though Disgaea 2 is a tactical RPG, tactics do not play nearly as large of a role as sheer levels do. Since the maximum level is 9999 and there are a number of ways to attain an absurd amount of power, the chances of getting into an even fight is, unfortunately, a bit lower than desired, especially in the game’s many optional areas. Most of the time, enemies will either be easily blasted away or powerful enough to wipe out several key party members unless defeated before they get the chance to act. The game is quite easy in general though, simply due to the fact that a few minutes of leveling can almost always allow the party to gain a nice boost in power. Luckily, attempting to clear geopuzzles, open treasure chests before enemies are able to, and rack up huge bonuses can add a bit of extra challenge and enjoyment to battles. 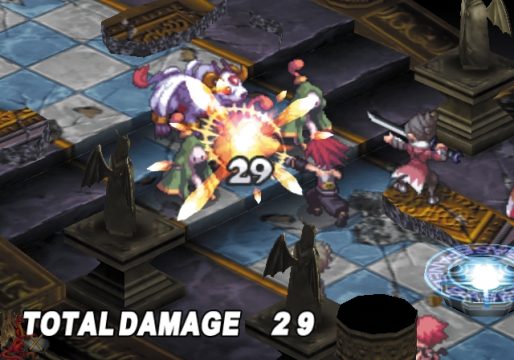 Though battles themselves may not be especially impressive, there are a number of interesting out-of-battle systems that are fun to play with. For example, it is possible to have bills passed in the senate. These bills have various effects, such as unlocking optional areas or affecting shop inventory. Of course, as the game takes place in a world full of demons, it’s also possible to perform a number of shady actions in order to make sure the desired effect is achieved. These include bribery, killing off senators that disagree with the party, forcing senators to pass out by using chloroform, and getting those that oppose the bill so drunk that they don’t really know what’s going on. This time around, it is also possible to become a senator, vote, and accept bribes. It is also possible to have party members become convicts, which has a number of advantages, including the ability to make the senate a bit more wary of opposing them.

That’s just the beginning, though. There are also dozens of character and monster classes to choose from, a reincarnation system, and customizable items that contain their own worlds within them, each filled with a number of demons, both good and evil. The ability to create a massive army, customize it to the finest detail, and pass bills to alter the game in numerous ways add a lot to the experience.

Unfortunately, creating a custom-built army does have its disadvantages. The menus have improved a bit since Disgaea, and are fine in most places, but they leave a little to be desired when trying to organize a few dozen troops and a few hundred pieces of equipment, each of which possesses its own unique residents. Some improved organization options would have been very useful.

Despite the additions outlined above, Disgaea 2 is extremely similar to the first in all aspects aside from the moral orientation of the main character. This is intentional though, as this sequel purposely returns to what made the first so popular. As such, it may not be particularly unique, but that’s not a bad thing in this case.

The Disgaea series isn’t exactly known for its deep storylines, and this installment is no exception. Instead, it focuses on interesting characters and on a fairly unique, zany brand of humor to keep players entertained. Those that are new to the series may not fully appreciate the large number of cameos that are present this time around, but they should still have no trouble following the story. 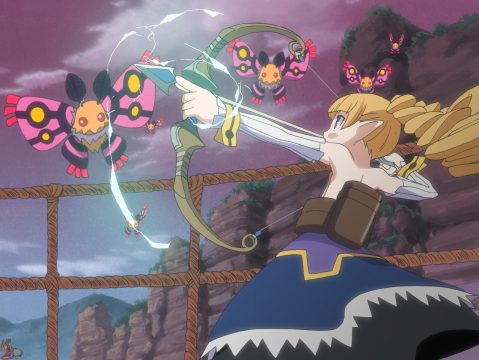 There are anime sequences now too, though they’re rare.

Veterans of the first will likely be able to get through the game’s main story in about thirty hours or so, but this is an example of a game that everyone plays at their own pace, so some players might take two or three times as long. In any case, there is an enormous amount of optional material this time, enough to easily dwarf previous Nippon Ichi games. This can easily tack on a full fifty to one hundred hours for even the most efficient players.

Aesthetically, Disgaea 2 has improved significantly since its predecessor. The visuals in particular have received the largest overhaul. Though they still aren’t all that impressive next to some of the graphical tyrants out there, the improvements to character sprites, ability animations, and pretty much everything else are indeed welcome. There are also a number of well-drawn still-images and even a few anime sequences to be found.

While they didn’t receive quite as much attention as the visuals did, both music and sound have improved a little. Disgaea 2 does feature a large number of new tracks, but it also borrows slightly from the original’s soundtrack. Though the quality varies, there are a few above average tracks mixed in, and the soundtrack as a whole is less repetitive than the original’s, especially in the item world. As far as sound goes, the annoying voice clips from the first have been replaced, and several new sound effects have been added.

Due to their similarity, the majority of the players who enjoyed the first Disgaea will enjoy this installment. Of course, the converse is likely true as well. Newcomers to the series should note that it often rides the line between addictiveness and monotony and thus is not for everybody. Nevertheless, most players are apt to enjoy the experience, especially since the bulk of the monotonous parts are optional. Though none of the components that make up Disgaea 2 are especially spectacular on their own, they fit together very nicely along with interesting assembly and item customization systems and a fairly unique sense of humor to create a largely enjoyable experience.