The Value of Do-Overs

Mixing genres is often a dangerous thing. Too often, a game which tries to bring the best of both worlds to a new title will fall flat on its face, failing in one of two ways: by either mismatching aspects of both genres, which results in a mish-mash design, or by overreaching itself and stuffing every possible game mechanic from both genres into the game. Final Fantasy VII: Dirge of Cerberus is actually a fairly successful merging of the first-person shooter and role-playing game genres, but it straddles the gulf between the two a bit too broadly. The game isn’t enough of a hardcore FPS to satisfy followers of games like Call of Duty and Halo and yet doesn’t possess the deep play mechanics of a true RPG. Dirge of Cerberus provides a highly mobile style of combat, and an interesting, if flawed, plot, but its overall lack of complexity promises to limit the enjoyment of anyone expecting even a reasonable tactical challenge.

Set a year after the events of Final Fantasy VII: Advent Children, and a full three years after the original PSOne game, the storyline of Final Fantasy VII: Dirge of Cerberus centers on the exploits of Vincent Valentine. As a character whose recruitment was optional, Vincent was always one of the less well-developed cast members of Final Fantasy VII. Dirge of Cerberus fleshes out what little information players have about Vincent’s past while adding in newer story elements and characters. The conflict between the World Regenesis Organization and the ex-Shinra group known as Deepground takes up a great deal of the plot, as Vincent seeks to understand the connection between these hideously mutated soldiers and his own gruesome transformations. The story does two things well: it develops Vincent’s personality beyond the lackluster finish that FFVII gave him, and it closes his story off quite satisfactorily. However, it has a number of bothersome plot holes and inconsistencies, and at least one of the relationships central to the story, that of Lucrecia and Hojo, is borderline unbelievable. In addition, Dirge of Cerberus follows a bit of the same path as Advent Children did, reveling in spectacular acrobatic fight scenes — pre-rendered cinemas, in this case — to the detriment of depth in storytelling. Overall, the plot isn’t so much bad as it is clumsy, ignoring any pretense of a broader message while stumbling over unresolved plot points from Final Fantasy VII.

The combat system is a very forgiving take on the normal FPS system, featuring a large targeting circle and a choice between first and third person perspectives. Dirge of Cerberus‘s take on first-person shooters probably won’t prove much of a challenge to anyone with experience in the genre, but the addition of RPG elements does help make the game a bit more variable and interesting. Vincent can equip three different guns at once, which can be quickly cycled through with the R2 button. Each of these guns are made up of several unique parts, which can be upgraded and modified as the game progresses. This usually takes the form of reducing weight, increasing magazine size, or improving range and overall damage. Altering Vincent’s weapons is an extremely costly affair, with most of the Gil earned from each mission usually going to upgrading one weapon’s base or barrel by one level. To offset this, the game gives players a bonus at the end of each of the game’s chapters, allowing a choice between Gil or EXP, with the actual amount dependent on the player’s performance in the game’s many sub-missions. 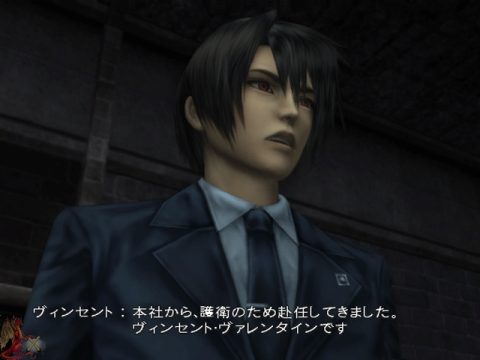 Overall, the interaction between Vincent’s three guns, his melee attacks, and his Limit Break transformations creates an entertaining, if not particularly deep, combat system. The ability to heavily modify Vincent’s weaponry goes a long way towards improving the game’s depth, but in the end, it simply isn’t enough to offset the fact that actually going out and defeating enemies is a very simple, straightforward process. A lot of Dirge of Cerberus‘s charm comes from the visceral thrill of putting a weapon together, customizing it, and then using it to blast a succession of foes to dust, and so shouldn’t be confused in any way for a test of wits.

Final Fantasy VII: Dirge of Cerberus received some fairly negative reviews on the other side of the pond for being hard to control, with a poor camera and bizarrely limited movement for such an agile character. Square Enix has made significant changes to the North American version, such as improving the pan speed of the camera, exchanging the roll-into-crouch move for a straightforward dash, improving Vincent’s jump height and overall speed, and adding in aerial gunplay and melee attacks. The end result is that Vincent is now a much more mobile character, allowing combat to be faster, more fluid, and more enjoyable. The tradeoff for all this improvement, though, is that Dirge of Cerberus no longer sports an online mode. Many of the areas and missions included for online play have been converted into single-player missions, which are unlocked after finishing the game. These forty extra missions tend to be much more difficult than the normal game, as some restrict item use, allow only certain weapons or attacks, or simply present so many enemies that players will be quickly overwhelmed. These extra missions are a nice touch, adding in a bit of extra challenge for players who feel that the Normal difficulty setting was a bit too easy, but who aren’t quite ready for the assisted suicide of higher settings. 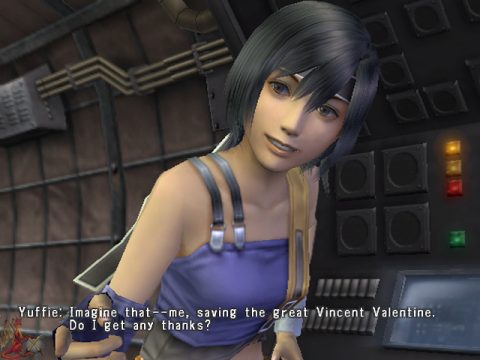 The soundtrack of Dirge of Cerberus goes for a symphonic, highly cinematic style, heavy on the strings and horns. This is appropriate given the game’s presentation and penchant for lengthy, dramatic cinema sequences. The soundtrack feels specifically tailored for Vincent, who is particularly at home with the OST’s dark leanings. Masashi Hamauzu shows off a bit of his compositional flexibility in this game, which at times sounds reminiscent of Hitoshi Sakimoto’s symphonic Final Fantasy Tactics soundtrack, yet at others resembles nothing so much as Mr. Hamauzu’s own work on Unlimited SaGa. The game provides a certain level of continuity through the current chapters of the Compilation of Final Fantasy VII series by retaining the same voice cast that worked on Final Fantasy VII: Advent Children. The actors churn out a very satisfactory performance, one which makes the inability to switch to the original Japanese voice track that much easier to swallow.

Graphically, Final Fantasy VII: Dirge of Cerberus feels very similar to Advent Children, featuring similar design elements and high-quality CG animation. There are certain aspects of the character design that feel oddly similar to that of Final Fantasy X, with intricate, spiky armor design and unusually vivid blues, reds, and yellows. The only real problems with the game’s appearance is a bothersome choppiness that occurs as the game is loading new data during play, and the fact that the popup that warns of a new in-stage mission covers most of the screen, obscuring the player’s view.

Dirge of Cerberus features a Very Hard mode, an extra level of difficulty added in for the game’s North American release, though it is questionable whether this was strictly necessary given the sharp contrast between Normal and Hard mode. Of course, the added difficulty setting does help to pad out what would otherwise be an exceptionally short game, as Dirge of Cerberus clocks in at only ten to fifteen hours to complete. The multiple difficulty levels, along with the reasonably deep weapon customization and an extremely solid selection of post-game activities, give Final Fantasy VII: Dirge of Cerberus a solid amount of replay value. This is especially true given the amount of time that can be spent re-tracing Vincent’s steps through earlier stages to unlock the game’s concept art, character profiles, and in-game CG movies.

Fans of Final Fantasy VII may find themselves in a split decision over Dirge of Cerberus. On the one hand, it provides much needed detail and background to one of the more intriguing characters of the original title. On the other hand, its lack of complex, tactical combat makes it ultimately much less satisfying than its more lengthy counterpart. The game does have some spectacular moments, with fully armored, mechanized armies facing off against one another in the ruins of a destroyed city, but most of the actual gameplay is fairly straightforward and without much in the way of hordes of foes or flipping aerial acrobatics. Ultimately, while the game isn’t what one would call a shining triumph, it succeeds in redeeming what was becoming a particularly onerous black mark on the series’s reputation. Although Final Fantasy VII: Dirge of Cerberus may not be a wonderous continuation of series tradition, it takes enough risks to be unique and interesting, and in the end, is a worthwhile play for any fan of the series.