When I was little, I was an absolute maniac for dinosaurs. Everyone in my family — not to mention every teacher I had in elementary school — can attest to this. I had two illustrated dinosaur dictionaries, one of which was actually a collegiate textbook, all sorts of model figurines, and a handful of real fossils. So I can say with some certitude that my elementary school self would have given anything for a game like Dinosaur King. My older self, not so much.

Dinosaur King began as a collectible card arcade game in Japan with an attendant anime series. The DS game takes the mechanics of the former and the characters of the latter. Unfortunately, it does not take any of the anime’s actual plot beyond the bare basics. A research consortium called the D-Group has developed the means to revive dinosaurs, changing fossils into cards which, when used with the pistol-like Dinoshot devices, can summon antediluvian behemoths to battle. The Alpha Gang (in Japanese, “Akuto-dan” or “villain gang”) shows up one day and steals a bunch of Dinoshots and cards, all in a single short cut-scene more appropriate to a Mega Man game intro. The villains then scatter across the earth, spreading chaos and searching for fragments of a mysterious and ancient stone tablet. Finding and fighting the Alpha Gang is the entire premise of the game for most of its length, though the third chapter at least gives the player a B-plot. The fourth chapter introduces the threat of an asteroid about to repeat the Chicxulub event, but then takes it away faster than you can say “deus ex machina”.

About the only thing of real note in the story is how it lets the player choose between the anime protagonists — or does not let one choose. In the anime, the three young heroes are Max (of the triceratops hat), Rex (with the blond hair), and Zoe (the token girl). For the game, the player can only choose between Max or Rex. Zoe is relegated to minor NPC status, either annoying the heroes with her chatter or getting kidnapped by the Alphas. This does not stand as one of the best decisions the game makes in terms of its plot — though to be fair, none of its decisions are particularly good in that regard.

The combat system appears to be lifted, practically in toto, from the arcade game. While most examples of monster-collecting games have to deal with the occasional accusation of being a glorified game of rock-paper-scissors, Dinosaur King really is a game of rock-paper-scissors. Every dinosaur has three moves to start with, but always specializes in one particular move type. Damage is largely one-sided, as whoever loses the rock-paper-scissors match that round takes all of it. Ties result in minor damage to both combatants. While base damage increases with level, the important thing is the skillset. 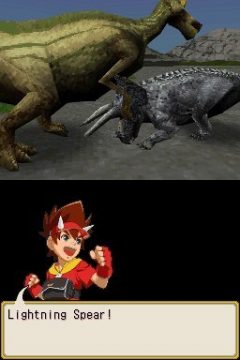 As dinos gain levels, they occasionally produce technique cards(much like in the CCG). The card’s type (rock, paper, or scissors) is determined by the dino’s preferred attack type, but they can be equipped to any of the player’s dinosaurs, so it pays to have a varied stable. More advanced techniques take more MP, and although this regenerates a little each round, it does so very slowly. This helps make battles more strategic, because both sides can see MP totals and know when a particular skill is out of juice or otherwise rendered unuseable.

A few other options unlock as the game progresses. At level 15, dinos gain a fourth skill slot, which is not immediately visible to the opponent side and which can be of any attack type. Past that point, dinos will also start producing super-skills. Those are based on the originator’s elemental type (fire, water, electric, etc.) rather than the attack type, and can only be equipped on dinosaurs of the same element. These tend to have the more spectacular and useful effects in battle, on top of changing the battlefield to match the elemental type.

The enemy AI has settings that take these specialities and elements into account, along with setting how an enemy reacts to being hit. This game’s difficulty hinges entirely on how good the AI is, as it covers the entire spectrum from absolutely moronic to fiendishly devious. Specific random encounters in an area may follow the exact same pattern every time, to the point where it’s possible to win twenty battles in a row without taking a single hit. Boss AI also tends to follow patterns, if one can figure them out, but it also has a greater chance of acting contrary. The big boss, Dr. Z, has no regular starting strategy or consistent reactions, so he’s far closer to being like an actual human opponent. Unfortunately, he’s also got the highest level dinos up to that point in the game, and experience gains are not ample enough to close the gap quickly.

This is a regular problem throughout the game, as the enemy’s power level ramps up far faster than the hero’s dinos — especially if the player decides to shelve one in order to try a new dinosaur out. The good news is that it’s quite possible to take out an enemy that is twenty, or even thirty, levels higher if the player is lucky and quick to notice the local patterns. The bad news is that the player is going to take out enemies twenty to thirty levels higher on a regular basis, especially if he or she decides to battle on through the post-game zones without doing several hours of low-level grinding first. 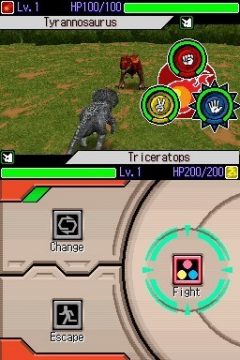 So, the story is a bust. The combat’s got issues. Is there anything the game got right? Yes, and that thing is the selection of dinosaurs. There are seventy-two species to be collected through the normal course of the game, plus quite a few more that were promotional or observed through other dinos’ special attacks. That includes theropods, sauropods, raptors, hadrosaurs, ceratopsians, and the ankylosaur and stegosaur order (the thyreophorans). Sometimes a few outsiders like pterosaurs or plesiosaurs (which are from different families entirely) also appear in special move animations. This list goes well beyond the usual suspects, and features saurians with names like Shantungasaurus, Irritator, and Saurophaganax. There are some obvious base models shared between the 3D sprites, but it’s amazing how many little details — in the form of horns, crests, and frills — are accurate extrapolations of paleontological discoveries. About the only thing missing are the feathers, which are still a matter of some debate anyway. All of the 3D models are taken from the arcade game, which means there’s a level of graphical quality in battle that is surprising in a mid-era DS title. It’s a shame that there was no way for the graphics of the main game to live up to those of the combat.

In order to expand the stable, players will need to dig up fossils (along with a ton of sellable junk) and then clean them at the local D-Group base. The investigation and excavation are actually kind of fun, using a ground-penetrating radar and a huge drill bit. The cleaning involves a simple touch screen game, but the most interesting part is how the game handles names. Most games in Japan are programmed with a four or five character maximum, because that’s all one needs to write most Japanese given names. Dinosaur names tend to be much longer, so Dinosaur King ended up being one of the few games (if not the only one) with a twenty-eight character max in English. So if the player wants to name a Carnotaur “Princess Kwjibo the Wondrous,” that is perfectly possible (if a bit weird).

My inner seven-year-old cries, but I really cannot give Dinosaur King a higher score than a two. There are just too many issues with the story, the balance of combat and difficulty, and the general presentation for it to get anything higher. On the other hand, Sega didn’t actually need to do any more with this game to achieve success. There were more than enough dinosaur-crazed schoolchildren in Japan back in 2008, or the rest of the world in 2009, and Dinosaur King really lives up to its name in that regard.