A Stroll Down the Digital Lane

The Digimon RPG experience was something that passed me by when Digimon Story: Cyber Sleuth initially released on the PlayStation consoles. Even while owning a PS4 and Vita, it was easy to miss the original launch of Digimon Story: Cyber Sleuth and its sequel, Hacker’s Memory when the two games launched in early 2016 and 2018 respectively. However, a redemption arc begins with Digimon Story Cyber Sleuth: Complete Edition for the Nintendo Switch which houses both games in one handy package. With a robust selection of Digimon, and competent though weak story, and other minor issues, Cyber Sleuth is enjoyable but won’t be for everyone.

Players begin the adventure by choosing a male or female protagonist but quickly say goodbye to their identity; knocked into a coma, the main character survives by a digital imprint of their body manifesting in the real world, imbued with the ability to jump in and out of cyberspace freely. Being a newly minted Cyber Sleuth, players are uniquely suited to solve the mystery surrounding the numerous cases of comas just like theirs.

Both the protagonist and their allies have realistic struggles, and the support cast is generally well developed, though frequently ill-placed humor is injected into serious moments. The plot can also easily stall if the player is not talking to the right NPCs or regularly completing seemingly inconsequential side quests, which can have excellent story beats but unfortunately are far too repetitive with paltry rewards. 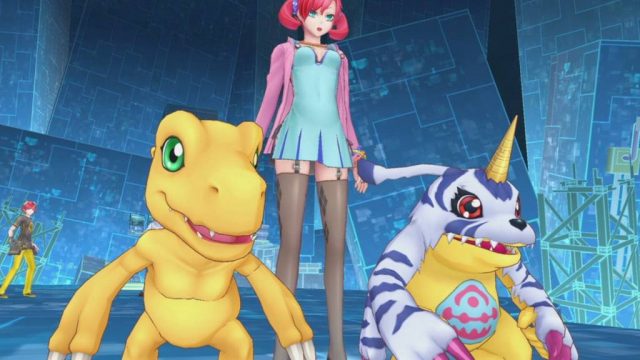 All the recognizable Digimon are here!

As the title would suggest, players eventually have the option to pick between three digital monsters – or Digimon – who do all the fighting for them. This is just the starting point, because there are numerous Digimon to battle and collect. Unlike the other popular monster catching game, players do not capture Digimon in Cyber Sleuth. Instead they collect a percentage of that Digimon’s data and after fighting them enough they are able to download and use them in battles.

Collecting a slew of Digimon is the game’s best aspect and is genuinely fun. Initially, early Digimon begin in a basic form, but can Digivolve multiple times before reaching the highest Mega forms. Between the two extremes are both evolving and devolving to reach benchmarks to obtain even more Digimon. Generally, Digimon will evolve by meeting certain stats by leveling up; once these are reached, a message next to the Digimon appears to let the players know it is ready to Digivolve. In  the Switch version of the game the Digifarm has a feature that helps streamline this process. When placing the Switch in Sleep Mode, the game clock continues to run, which allows all the Digimon in the Digifarms to generate experience, even while actively not playing the game. 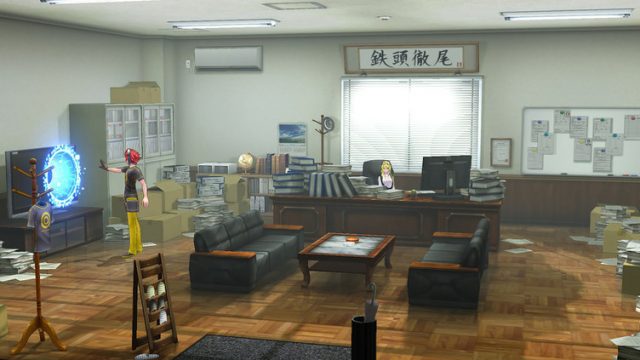 This smart TV sends players into the digital world.

All that Digivolving amounts to obtaining plenty of Digimon to choose from, including multiple evolutionary paths to take, so completionists will have to take the time necessary in order to see all the different Digimon that can be created. Certain Digivolutions require specific key items, while others require a completed save file of the second game, Hacker’s Memory.

Most of the designs for the Digimon are wonderful, armed with signature attack moves that come straight from the television series. The few Digimon that get the spotlight during story segments act how they were portrayed in the show, which adds a pleasant feeling playing through the game. While the humans are the focal point, Digimon are the heart and soul of this game, and they do not disappoint. The game looks great on the Switch as the cast pops out with a wide range of colors and designs for every unique character. If there were any graphical downgrades from the PlayStation 4 version, it was not noticeable.

Combat centers around a rock-paper-scissors style matchup, with elements that have both strengths and weaknesses, with turn order being dictated by a Digimon’s speed stat. To help players remember which element a Digimon is strong against, red calls out strong, white signifies neutral, while blue represents weak. Any time the Cyber Sleuth finds the odds are against them, Digimon can be swapped out to ensure a party lineup that can take advantage of the enemy’s weak point. 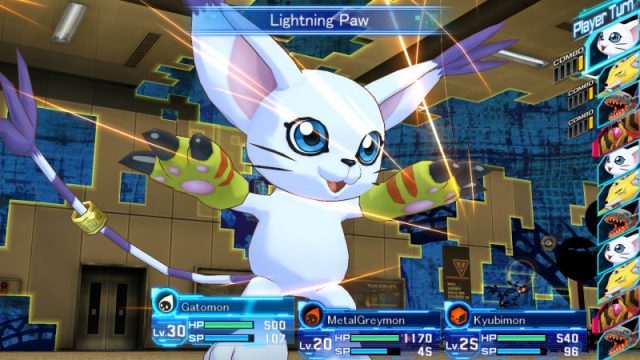 There is one drawback to having strong Digimon in parties in the form of memory. Each Digimon occupies a certain amount of memory, and the player only has a small amount of memory at the start of the game. There are items called Memory Up scattered across the dungeons and side quests that can raise the memory, adding more room for additional or stronger Digimon to be in the party.

The setting for Digimon Story: Cyber Sleuth is that of a modern day Tokyo, with multiple real life areas that the players can travel to. While most of the areas are small, the backgrounds look and feel like Tokyo would if an invasion of digital monsters ever were to happen. The music does its job, with most tracks having an electronic feel to it, which fits when exploring the online sections of the game. The track while exploring Kowloon did get grating after the second or third loop, which is a shame because it is one of the recurring areas that players have to explore for a good portion of the side quests.

Digimon Story: Cyber Sleuth is built for the fans of the series. There were things I enjoyed, like my trial-and-error of finding new Digimon through the evolutionary lines, and things I did not, like the lost item quests. The item was sometimes feet away from the person! The game may never win any awards for its story, but it was a solid romp in a digital atmosphere that reminded me how much I enjoyed the television series when I was younger.