How do you follow up a game like Diablo II? It holds something of a legendary status in the gaming world. Even twelve years after its original release, the game still has a massive following and is regularly played by thousands on Blizzard’s Battle.net service. Very few games can claim to have that kind of longevity, and most of them were made by Blizzard anyways. A few years ago, several former Blizzard employees attempted the daunting task of topping Diablo II by creating Torchlight, but apart from higher-end visuals and a few clever new mechanics, it was inferior in virtually every way. It took twelve years for Blizzard to finally create a sequel themselves, and rather than taking Runic Games’ approach of trying to build on top of what they’d already created, Blizzard instead took the core mechanics, stripped away everything else, and rebuilt it from the ground up. The result is a game that plays exactly like Diablo II, and yet hardly resembles it at all.

Diablo III takes place twenty years after the events of the last game. With the defeat of the three prime evils and the destruction of the corrupted Worldstone, all has been relatively peaceful in Sanctuary. The town of Tristram has been rebuilt, and it’s there that the Horadrim scholar Deckard Cain does his research, aided by his niece Leah. His research leads him to a prophecy about the end of days, which will be marked by something falling from the heavens. Something does fall, striking the cathedral in Tristram, and with its arrival, the hordes of Hell are once again unleashed upon the world. Hearing of the plight of the town, heroes arrive to lend their aid, and this is where the player’s journey begins.

One area where Diablo III makes great strides over its predecessor is in the presentation of its story. Players will learn more about Sanctuary, Heaven, and Hell over the course of Diablo III than in the entirety of the previous two games put together, while simultaneously filling in all the holes in those games’ stories. While the plot may not be spectacular — indeed, its quite predictable, and Act II in particular is little more than a rehash of Diablo II‘s — the game has lore and history in spades. Defeating new enemies yields snippets of lore about them that can be played in the background without ever stopping battle. Players can converse with NPCs regularly to provide new insight into the game’s progressing story. Best of all, however, are the game’s three followers. Unlike the followers of Diablo II, each of these has a name and a backstory of their own. Players can learn more about their individual stories as the games progress, and although nothing really becomes of them, all three have the potential to make interesting bits of DLC. During battle and while exploring the world, your follower provides entertaining bits of banter and observation about the world. These change with each act, and much of it is tied to the player’s choice of class; players will need to complete the game several times in order to hear everything the game has to offer.

Of course, the story is just a side attraction, a fun distraction to change up the pace and let players relax a little bit in between bouts of the game’s main focus: killing hundreds and hundreds of angry demons. Diablo III ramps the formula into overdrive, sending out massive waves of enemies that make Diablo II‘s fallen camps look like garden parties. The game is faster than ever, and at the same time, it’s also much less frenetic. There are many more healing options in the game, the most notable of which are health orbs that drop from fallen foes and can be picked up on the fly. The result is that even though combat is faster paced and more exciting, players put their focus more on the fighting and less on a rapidly fluctuating health bar. Players also have more options at their disposal. In addition to the standard point and click mouse controls, four skills will also be bound to the 1-4 keys on the keyboard. 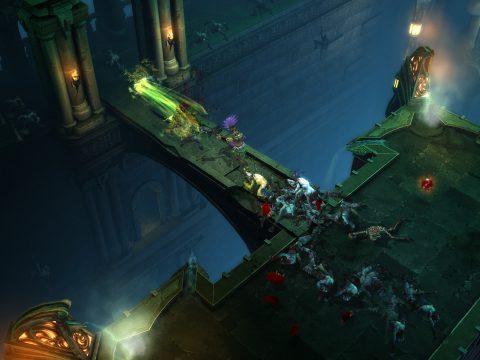 You shall not pass!

While little has changed from a control standpoint, character development has been turned on its head, to the point where it no longer resembles anything seen in the previous games, or in any other games at all. Diablo III provides five unique character classes, each of which plays very differently from the others. Not only do they all have different skills and distinctive forms of equipment to draw from, they also have unique resource pools, each of which functions and regenerates in a different way. However, regardless of which class you choose to play as, they all develop in the same way. Each level, a character will learn new skills, which come in seven varieties that differ for each class. As a general rule, each type is bound to different buttons: the left and right mouse buttons and the 1-4 keys. Each class can also choose from an assortment of passive skills. Rather that putting skill points into each of these new skills as they become available as in prior Diablo titles and virtually every RPG ever, players won’t have to do a thing with them at all. They’re all learned automatically, and they’re all designed to scale with the game, making them as useful at the beginning of the game as they are at the end.

Instead, character customization comes from choosing which skills to use; only one skill from each variety can be equipped at a time, and only three passive skills can be used as well. There are three or four skills of each type to choose from, and creating a set that works for you is one of the most enjoyable parts of the game. Skills can be changed at any time, encouraging experimentation and ensuring that players aren’t relegated to a single build; if things are getting stale, mixing it up with a different skillset can go a long way. To add to the fun, characters also learn skill runes, which are augmentations that can be applied to the various abilities. Like skills, only one rune can be equipped at a time, and each skill has five runes to choose from. Many runes fundamentally change how the skill functions, up to and including its animations. The number of viable skillsets available to each class is frankly mind-boggling. All the basic skills will be learned by level thirty, but players will continue to discover new runes all the way to level sixty, which means the experimentation can continue through Nightmare difficulty and possibly beyond.

Loot is the other big thing the Diablo franchise is known for. Diablo III delivers here as well, and it’s been streamlined a fair bit. Magical items no longer have to be identified, and scrolls of identify are gone entirely. Rare items still need to be identified, but no special abilities are needed to do so, providing that extra bit of surprise without the irritating item requirement. The inventory system is disappointingly still grid-based, but items are much smaller now, with none taking up more than two slots. The actual pack size is larger, too, and players will find it takes quite a while to completely fill up one’s inventory.

A crafting system has also been added, supplementing the loot system quite nicely. Over the course of the game, players can invest gold with the blacksmith in order to learn new crafting recipes. The blacksmith can also disenchant unwanted magical items into the components needed for crafting, allowing players to turn their junk gear into things they actually want to use. There’s also a jewelcrafter who can upgrade the quality of gemstones used for socketing, though it’s no longer a free service like in Diablo II. However, this jewelcrafter can also remove gems from their sockets without destroying the item or the gem, which makes it much more useful. Gems have received a bit of a downgrade overall: diamonds and skulls have been completely eliminated, and shields can no longer be socketed. 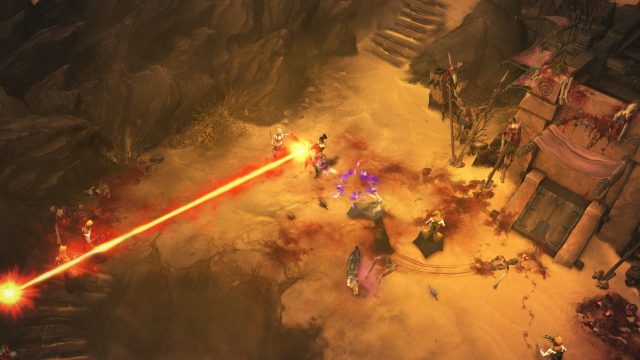 Akira Toriyama wants his move back.

It’s shocking just how good Diablo III looks, considering how much it crams onto the screen at once. The environments in particular deserve some accolades. Not only are they creepy and incredibly atmospheric, but there’s a ton going on in the background that makes each area come to life. It’s particularly noticeable in elevated areas, where battles and skirmishes are often visible in surprising detail. New enemy designs are regularly added to the mix, and the larger groups of foes players encounter often consist of half a dozen or more different types, providing plenty of visual variety. The audio is also very good, but not quite as impressive. The voicework is terrific, but the soundtrack can sometimes falter. While most of the score consists of the haunting atmospheric tracks that were iconic to the original two titles, occasionally one will encounter a bombastic battle symphony that would feel more at home in a Warcraft game than in Diablo.

Unfortunately, one cannot talk about Diablo III‘s many strengths without mentioning its one glaring weakness: its requirement that players always be online. This goes far beyond a simple registration check. The connection must be constant, and players will be kicked from the game if their connection to the server is interrupted. While one might expect this for an MMO or even for simply playing online, this affects single-player mode as well. Worse, because the dungeons are randomly generated, getting kicked from the game means that they will reset, requiring players to explore and traverse them over again. Although the debacle of launch day has since stabilized, going forward players can still expect all the issues associated with online gaming to be present, even when playing alone: server outages, disconnections, and of course, lag.

Despite all the outrage over the first-day server problems, the fact that everyone is getting so upset over not being able to play just shows how great the game really is. While legacy certainly has something to do with it, Diablo III goes beyond a mere nostalgia trip; it’s a fundamentally improved experience that may once again change the ways developers look at creating RPGs. It takes the core experience that made Diablo II great and makes it less frustrating and, more importantly, much more accessible. Where Diablo II encouraged careful planning and forethought, Diablo III encourages experimentation and fun. And hey, if you’re not down with that, Torchlight II is right around the corner.