Trapped in a Questionable Port

Prior to booting up Death end re;Quest, I never had any first-hand experience with Idea Factory or Compile Heart’s games. However, I knew vaguely that this was one of their more interesting titles. After playing through the newly released Switch port, I can definitely say it was an interesting experience. On one hand, the game’s narrative and characters are engaging enough. On the other, the actual RPG elements are hindered by a battle system that, while having some neat ideas, doesn’t really come together. Moreover, that’s before the issues with the Switch port come into play.

Shina Ninomiya awakens in a small cottage without any memory of the past year, only to discover that she has strange spider legs around her waist — the result of the Entoma Scourge, a curse plaguing the game’s world and its inhabitants. It’s not long before she gets into contact with Arata Mizunashi, the lead programmer for the VRMMORPG World’s Odyssey. It’s revealed to the player that Shina was the lead director for Enigma Games, the development team that worked on the game. For reasons unknown, she is now trapped inside, having vanished shortly after it was canceled in the real world. Shina’s Entoma curse gives birth to a buggy, a creature that devours the remains of dead Martyrs, monsters created by the Entoma Queens that are corrupting the various in-game locations. Soon after, she meets female NPCs that act suspiciously life-like and also carry around their own buggies. It is soon discovered that defeating these Queens will help Shina regain parts of her lost memories and that reaching the sky capital of Odyssia and finishing the game will activate the Ending Engage, which will allow Shina to log out and awaken back in the real world.

While the “trapped in a VRMMO” premise is hardly a new concept, as seen in franchises such as .hack and Sword Art Online, Death end re;Quest does enough to differentiate itself. Large chunks of the story take place in the real world as Arata and the other Enigma employees hide from the law after accusations of cyberterrorism arise while helping Shina. Things get complicated when they are targeted by an organization of people in rabbit masks. The connections between what is happening in the real world and World’s Odyssey add intrigue, making the execution of a well-worn premise stand out from the crowd with high stakes that feel palpable throughout. 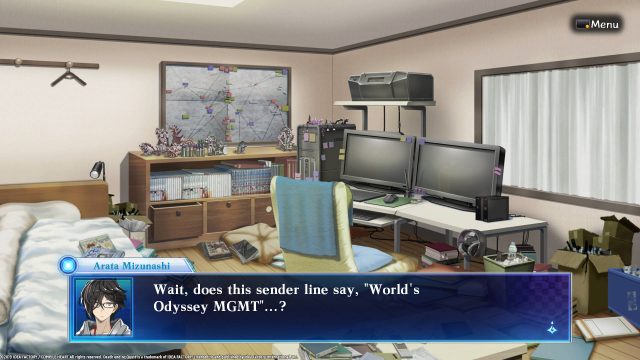 The characters prove to be a likeable bunch thanks to enjoyable interactions and character development, with Shina and the female NPCs showing good camaraderie with each other, buoyed by optional conversations that take place at designated camp sites. The strong English voice work and localization don’t hurt either, with Kayli Mills as Shina in particular doing a great job of selling the emotional scenes. The one major issue with the voice acting is that not all of the story scenes are voiced, which is exacerbated by their its arbitrariness as some important are voice while others aren’t. Players can switch to the Japanese voice track, which features voice work throughout.

The narrative and characters are decent and overall compelling, even as some aspects leave a sour aftertaste. Death end re;Quest is not afraid to go into dark and disturbing subject matter, with murder and graphic violence being depicted over the course of the game’s story. Players who are squeamish should take note as the violence is portrayed both visually and within text descriptions during the lengthy visual novel segments. The game’s opening scene sets the tone with Shina getting killed graphically by a powerful enemy, with blood splatters and the voice actress’ performance contributing to a scene that is genuinely disturbing right out of the gate. Worse, it’s troubling how similar scenes often feel like they’re included for mere shock value and don’t otherwise enhance the narrative.

In the game’s various bad endings that occur at several intervals, the player picks between two or occasionally three choices that determine if they proceed with the story or get a non-standard game over. These bad endings often depict the female characters getting killed in ways that are worryingly callous; whether it’s imagery of one of the characters getting strangled by another or one scene in particular that has the girls slowly and painfully melt in an extremely heated volcanic area that lasts several minutes and lingers on their agony. The violent nature of these bad endings is excessive. These scenes go too far, lacking any real purpose or commentary, especially since they are not canonical to the story’s progression.

There are also scenes that indulge in fanservice, such as the female characters falling on top of each other in compromising positions or a hackneyed “joke” where Arata is caught accidentally staring at his female co-worker’s cleavage. While these scenes happen early on and let up during the latter half of the game, they are superfluous and never serve the narrative or characters in any way. While levity is welcome, considering the story’s darker overtones, the fanservice is awkward and out of place. The most prominent bits of unnecessary fanservice, however, involve the female party members’ Glitch Mode forms that have them almost completely nude. This borders on creepy as the young-looking anime girls are overly sexualized in these forms. This distracting treatment is a detriment to an otherwise enjoyable plot. 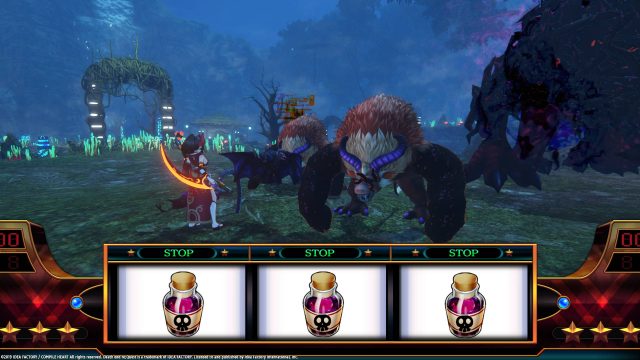 While a good portion of Death end re;Quest takes visual novel form, there is also the RPG gameplay to consider. Sadly, this is where the game really falters. The player will travel around World’s Odyssey to rid it of the corruption caused by the Entoma Queens.  Occasionally, players will be unable to move on due to a bug in the programming, initiating a sort of scavenger hunt that sees the virtual characters locate a Reality Object, a real-world artifact mysteriously found within World’s Odyssey, which in turn provides a clue for Arata to make his way to a landmark in the real world where he’ll find the line of code he needs. This does lead to the occasional situation where the player is stumped on how to proceed before remembering that they need to go back to the visual novel portion in the real world. While this usually makes sense in context of the story, there are instances where it feels forced and arbitrary. Each party member also has their own field skills that are used to get past certain obstacles during exploration. This is mostly used to get access to optional treasure with only one noteworthy instance where a field skill is required for progression, making this aspect feel undercooked.

The game’s combat has the players take control of up to three party members in a turn-based battle system with some novel twists. When each party member takes their turn, the player moves around the combat arena to target enemies with various attacks and skills or heal allies. Up to three actions are selected on each party member’s turn; using three regular attacks in a row or at least one skill with a knockback effect will push targeted enemies into the edge of the arena, other enemies, or other party members for additional damage. However, some enemies won’t be sent back far or end up slightly off-center from where the player intended to push them. It is also easy to mess up executing skills if the targeting reticles aren’t positioned carefully, leading to one or two selected abilities not going off at all. Through the use of an avatar, Arata himself appears in World’s Odyssey, and his programming skills can be used to affect the arena in various ways such as temporarily switching to a different game genre like fighting, first-person shooter, or platformer.

These ideas lead to a unique battle system that stands out, though often for the wrong reasons. Combat itself feels sluggish, especially during the later parts of the game thanks to the number of enemies fought during encounters and the amount of HP they have reaching into six digits on normal difficulty. As a result, regular fights often last for several minutes, and while switching to easy difficulty at any time reduces the tedium significantly, this is at best a band-aid on flaws that run bone-deep. The game also doesn’t properly explain certain aspects, including the option to switch party members mid-battle with whomever they are partnered or that positioning helps to avoid tight situations, which can sometimes yield an unfair game over. The camera sometimes gets disoriented during enemy turns, making it easy for the player to lose track of what’s going on. To the game’s credit, party members gain experience even when benched, mitigating any potential grinding as long as few fights are skipped. 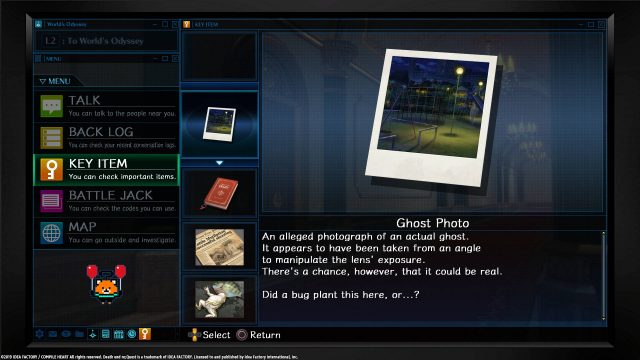 The visual novel parts of Death end re;Quest are visually sufficient, with character portraits that are distinctive enough to convey the personality and temperaments of the cast and backgrounds that show off just enough details without being too distracting. The visuals in the dungeon-crawling segments aren’t up to snuff as early areas are bland with little of interest aesthetically, while later areas look more interesting yet still aren’t exactly the pinnacle of design. Character and enemy models are passable enough but their limitations are exposed during the game’s limited amount of in-engine cutscenes that display lackluster and stiff animations. The Switch port is also poorly optimized with an unstable framerate, both in docked and especially handheld mode where it is consistently choppy during combat. The port itself is playable yet not the best way to play the game. Conversely, the game’s soundtrack has enough variety and memorable tracks that do a good job of setting the mood during both the dramatic and lighthearted moments. None of the tracks ever feel overused, which is especially true of the pulse-pounding and intense battle theme that makes the combat just a bit more tolerable.

Death end re;Quest is one of those games wherein I wavered as I played through it. The story was engaging overall despite my issues with the game’s use of violence for shock value, the unnecessary fanservice, and a combat system that made parts of the game a chore to play. The Switch port is also probably not the ideal way to play the game due to the poor optimization though it is serviceable if players can’t access it on either the PS4 or PC. Despite the issues, I would have a hard time denying that I was compelled by the experience more often than not. If asked whether I like the game or not, my answer is yes…but not without some serious caveats.