Custom Robo Arena is an interesting title that probably would have made more sense as a strict fighting game. Fights stay involving in the early going, and the heavy customization aspect makes trying out a variety of setups quick and interesting. Stretching the content out to RPG length and saddling the production with a filler-plagued storyline makes it get repetitive long before the end.

The plot is mostly a rehash of innumerable other shonen stereotypes. A mute young man has never participated in the relatively new sport of custom robo battling before, but turns out to be a natural at it and proves this by trouncing every opponent he can find. Friends help and his family is supportive due to his father and sister working at the company that makes parts for users around the world. Quickly his school latches onto the idea of producing a potential custom robo champion for the first time ever, and eventually he makes it into the world tournament.

Events finally diverge from the most predictable course near the game’s end, but until then not much of genuine interest occurs. This is made worse by glaring repetition of certain moments: the main character must get up to have breakfast with his family, go to school and sit in class, and eventually have dinner with the relatives in exactly the same manner many times. By the time the daily formula has finally changed near the game’s end, it’s too late to make up for all the doldrums experienced to reach that point. 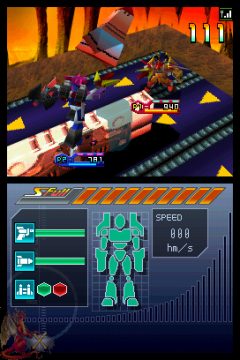 Conveyor belts that hold up when robots are jumping on them – somebody’s been working overtime.

Combat always takes place as a one-on-one altercation between the player and an opponent in a 3D environment. The first one to lose all 1000 starting HP is vanquished, and the action depends exclusively upon reflexes and reaction time once it begins. In addition to the direct actions of the enemy, the fighting environment itself sometimes offers hazards that can intrude upon the battle. A character is afforded a moment of invulnerability after being pounded several times in quick succession, but otherwise the rules are closer to Virtual On than anything in the Super Robot Taisen line.

The main draw of Custom Robo Arena is definitely the customization implied in its title, and it certainly does not lack in this department. The core robot, its gun, a side weapon, a pod launcher, and feet can all be swapped around. Doing each of these has an effect upon what the robot will do in battle, affording the player enormous leeway for trying whatever combat tactics seem interesting. Prior to every match the opponent lets the player wander off to purchase more parts, and once battle is joined there is still unlimited time to switch components around before fighting. The myriad options for customization allow thousands of combinations, and getting all the possible parts will require spending a long time with the game in order to acquire funds.

Custom Robo Arena unfortunately feels much more like a fighting game stretched out to a ridiculous length than an RPG, given that the experience earned from fighting has no effect on player performance. Single-player fighting game experiences tend to become quite dull if allowed to drag on, and the frequent rematches between computer opponents in this game make the whole enterprise far more repetitive than it should have been. By the time the player has finished fighting the hundred or so mandatory battles that make up the main game, vanquishing the enemy will have been drained of any interest.

Also sucking time away will be the polishing mechanic. Nintendo apparently felt the need to make the touch screen useful somehow, and using the robot will eventually make its parts dirty. This necessitates wiping it clean on the touch screen to keep performance at the top level. Polishing the parts does not usually take very long, but the frequency with which it must be done will likely become annoying. 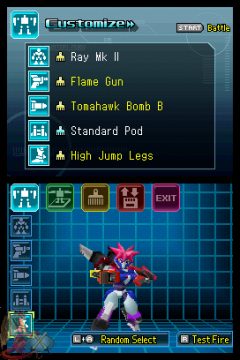 Spiky hair hardwired onto a robot frame might seem to lead to wind resistance. Oddly, it never does.

A fair amount of challenge can be found in taking down some of the adversaries, as some employ powerful parts that dish out tremendous damage. There is fortunately no Game Over, as the game allows the player to try again with no consequence. Losing repeatedly will open the option for the enemy to have a percentage of its HP missing at the beginning of the battle, with the maximum correction three-fourths of the usual total. Coupled with the ability to go back into the customization menu and switch setups, this makes the game easy to finish with persistence.

The visuals outside of battle are perfectly acceptable displays of sprites that do not wow in any way, while the fight graphics get the job done while reminding players of why the DS’s polygon-pushing power is generally not well regarded. Aside from the fact that character sprites seem to be walking into a powerful wind every time they move, the visuals are unremarkable. The audio relies heavily on electric guitar, with most of the tracks that lack this instrument instead employing strong techno elements. Like the visual part of the game, it does the job without attracting a great deal of attention.

Perhaps if I’d had someone in the area to test the wi-fi capabilities of the game, Custom Robo Arena would have come across in a more positive light. Fighting a real person instead of the incredibly long procession of AI opponents would have made a big difference in how much enjoyment the combat delivered. I was unfortunately stuck dealing with the single-player experience, and while far from terrible, it’s not all that it could have been. Those without friends who are still interested in the game years later, consider yourselves forewarned.