Over the years, I’ve had multiple gamer friends spend their Octobers playing their favorite scary horror games to get ready for Halloween. Not being a fan of that genre, I’ve felt a little left out of holiday-themed gaming, that is until Zeboyd Games presented presented a festive treat in the form of its delightful Cthulhu Saves Christmas. Employing a fun battle system similar to the developer’s previous titles and written with as much good humor and charm as one could possibly hope for in a game starring a squid-headed god intent on saving Christmas only to destroy the world, Cthulhu Saves Christmas is a bite-sized adventure worthy of a playthough any time of year.

Cthulhu Saves Christmas has a story that never even pretends to take itself seriously, and is all the more humorous for that. In the opening minutes, Cthulhu is presented with a mysterious Christmas present that somehow takes away his powers. Intent on getting revenge on Santa Claus for this cruel joke, Cthulhu heads out only to run into Santa’s grandaughter, the Snow Maiden Crystal, who informs him that Santa’s been kidnapped and the League of Christmas Evil is responsible for taking Cthulhu’s powers. Eventually joined by Baba Yaga-chan and Belsnickel, Cthulhu sets out to save Santa with a promise from Crystal that he’ll be rewarded with the gift of his powers back, which he desperately wants to use to destroy the world. It’s a hilarious premise that holds up wonderfully throughout the game. 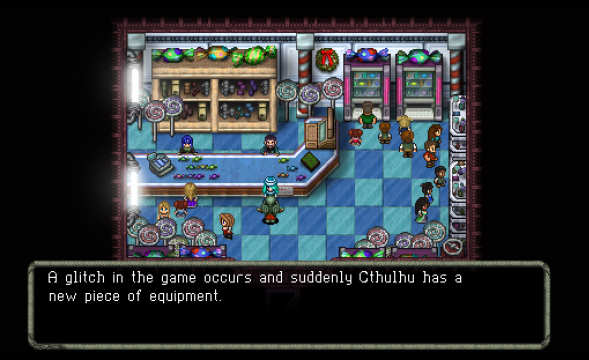 Some of the funnier parts of the game have nothing to do with an already funny story.

The game is paced nicely throughout more than 40 days of Christmas Eve, with time frozen due to Santa’s disappearance. Every seven days, the crew sets off to take on a new member of the League of Christmas Evil, such as Krampus or Mari Lwyd, but it’s the days in between that really make the writing shine. Employing a R’lyehtionship system, every day Cthulhu can spend time at one location in town with a single NPC or party member. Each bite-sized encounter is brilliantly written and often sees Cthulhu doing inadvertently nice things for devious and selfish reasons. These game days typically take only a minute to complete but are not only there for laughs. At the end of each day, players are rewarded with a new weapon, item, or piece of armor for a party member; these events are vitally important as there is no in-game currency or store to purchase upgrades. The one frustrating aspect of this system is there are far more R’lyehtionship events than can be played in a single playthrough, but with a four-to-five-hour narrative, multiple playthroughs to laugh at everything aren’t a problem.

The battle system in Cthulhu Saves Christmas is one that fans of previous Zeboyd titles will find familiar and newcomers will quickly embrace. Battles are begun when a danger meter fills up while exploring locations. The encounter rate seems a bit high, but after a set number of random encounters is met in an area, a huge EXP bonus is earned and no more random battles occur. For those looking to grind, simply opening the menu at any time and clicking the battle button will allow for more action. The battles are traditional turn-based affairs with each character having a pool of up to eight skills to use. Four of these can be set before battle, while three are randomly chosen each battle; the final ability each character has is a rest and recharge command, which not only refreshes any abilities used up, but also selects a new set of randomized abilities. The randomly chosen commands are a fun little tweak to Cosmic Star Heroine’s combat system and keep every encounter from simply playing out exactly the same way.

Convenience is built into the battle system as turn order can be viewed at any time via a meter on-screen and characters receive boosted powers every few rounds when their hyper meter fills, allowing for stronger attacks or increased areas of effect. While the system is quite good, it starts to falter a bit near the end of the game as, while enemies don’t seem to get stronger in the last few dungeons, their hit point pools dramatically increase, drawing battles out far longer than they need to be. Choosing how and when to use status effects and elemental damage, including the weakness-impacting insanity, can drastically change how long individual combat encounters take, but random encounters in the last couple of dungeons can easily drag on for twice as long as earlier boss battles. Common enemies in the late game have several thousand HP, with single-target attacks doing just a couple hundred damage even at the easiest of three difficulty settings. 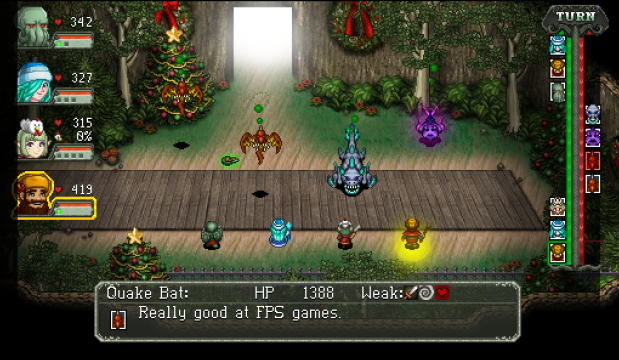 Keeping up with everything else that Cthulhu Saves Christmas does well, the art design and soundtrack are equally as impressive. The pixel artwork is excellent and never finds itself wearing thin through the rare reuse of resources. Each land explored has its own Christmas-themed look to it, unique enemies, and evil boss taken from various winter mythologies around the world. The soundtrack is solid throughout, with noteworthy tracks like the ominous melody Carol of the Bels, and the near-Mannheim-Steamroller-level Carol of the Bels But Louder.

Cthulhu Saves Christmas brings a lot of fun to the Christmas table. Brilliantly written and artistically designed, Zeboyd Games has gifted their fans with a game reminiscent of previous titles, but with enough new tweaks and holiday-themed fun for anyone to jump into this winter. If any RPGamers need a break from the story-heavy, hundred-hour games that we often find ourselves enmeshed in, this hilarious little breath of fresh winter air might be just what the doctor ordered.