Originally released for the PSP in 2007, Crisis Core is the prequel to Final Fantasy VII (1997) and was an entry that almost only hardcore fans got to experience. This year, Square Enix released a remastered version dubbed Crisis Core -Final Fantasy VII- Reunion on multiple platforms, bringing this story to new generations and to those who missed it. Its quality-of-life improvements, including a polished presentation and a reworked battle system, make it feel more akin to Final Fantasy VII Remake. While Crisis Core has some rough edges and is a second-class entry compared to the other games, it serves as a delightful appetizer before the release of the second entry of this reimagined trilogy.

Crisis Core -Final Fantasy VII- Reunion stars Zack Fair, a member of SOLDIER who accompanied Cloud and Sephiroth years prior to the events of Final Fantasy VII. The charismatic 2nd Class soldier Zack dreams about becoming a hero and has been training for years in the SOLDIER headquarters preparing for the real action, and he finally gets his chance after being promoted to 1st Class. From that point on, the game sends Zack on diverse missions to stop nefarious forces such as the Wutai. It also focuses on the baffling motives presented by other members of SOLDIER, while making reference to the events of the original game regarding Hojo and his clones, which this game expands upon.

Adding a touch of welcome humor when possible, the game satisfactorily details the story that Tifa and Cloud share with their friends about the tragic events that happened in Nibelheim, focusing on the role that Zack played. This story from Zack’s perspective addresses questions players may have about Cloud’s foggy memories explored in the first game. The ending also leaves players longing for more and ready to begin or revisit Cloud’s adventure. Crisis Core’s ending also fits nicely with the recently released remake since Zack has a heroic scene at the end of the game, hinting a more important role in this reimagining.

One of the things that will undoubtedly captivate fans of the original game is the appearance of characters like Sephiroth, Doctor Hojo, and members of the Turks showing a different side of themselves. With Final Fantasy VII’s antagonist Sephiroth being considered a hero and foes in the original game helping protagonist Zack, events from this perspective are refreshing and give more complexity to these characters. The new members of the cast are also excellent additions, namely a young female member of the Turks and two enigmatic officers of SOLDIER called Angeal and Origin, being friends and foes at the same time and making Zack’s journey peculiarly compelling. Aerith, Cloud, Tifa, and other allied members are also included as secondary characters with welcome scenes that will resonate with players of the first game. The relationship between Zack and Aerith is developed in detail, which helps to understand Aerith’s background even more. The buster sword, which is an iconic weapon of Final Fantasy VII, has also its deserved spotlight, with its origins being explained in a way that gives even more importance to Cloud’s recognizable weapon. 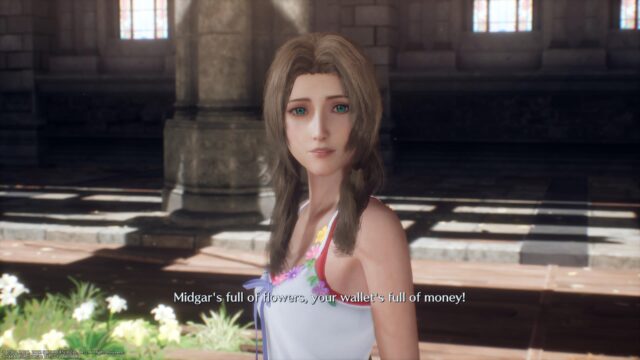 The flower girl wouldn’t have existed without Zack, the entrepreneur.

The game is divided into ten chapters, each lasting around an hour and a half, but players can have many more hours of content if they decide to complete side missions. These missions are unlocked as the story progresses or after talking to certain characters and can be accessed from any save point. They are fun and most take only a handful of minutes, featuring a few treasure chests and enemy encounters before the final battle. Completing them is alluring in the beginning since they grant rewards that include pieces of materia, powerful accessories, summons, and new shops. However, they become repetitive and feel like a chore after a while, making it extremely astonishing for someone to want to complete the 300 of them just for fun. Moreover, this side content is considerably longer than the normal adventure, with players likely having more than half of the missions incompleted by the time they are at the gates of the final battle. A reduced number of missions, prioritizing quality over quantity, would have been a great improvement.

Besides these missions, Crisis Core offers other activities that make each chapter more engaging, with most being entertaining enough to refresh the gameplay. For example, players are required to sneak into a base without being detected, snipe enemies, or complete short mini games such as recollecting materia within a time limit or entering a squat championship, a staple of the series that needed to be present. Many places that weren’t deeply explored in other entries such as Sector 8 are open for players to investigate, and while they aren’t full of things to do, they feature NPCs that unlock new missions. Returning from the original game and the remake are Mako Reactor 5 and the slums, so fans will have a second (or maybe third) chance to venture into them, with these small dungeons being easy to beat and entertaining.

Zack receives mail in his phone, which includes helpful tips and messages with official news from Shinra that sometimes report things differently from how they actually happened, which is a great touch. The Shinra Tower also offers some activities for players to do, such as training and creating new materia, with a wide set of different materia available. Zack, however, can only have up to six slots for it, so players need to choose carefully which ones to equip. Zack also has two slots for accessories that can be upgraded to four, with a wide array of items that can increase his stats or protect him against certain status effects. These few slots mean little room to personalize Zack, but the variety of options is notable. 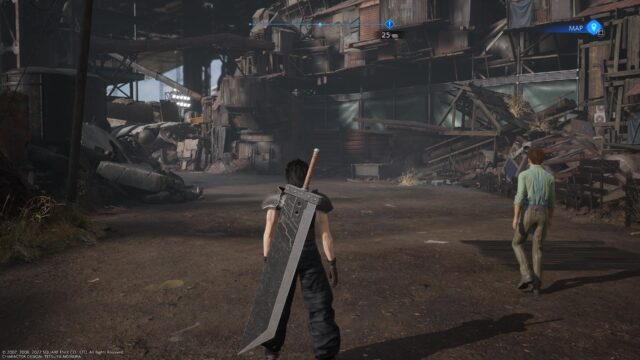 Crisis Core features real-time combat where Zack is the sole party member. Zack can attack using his sword or spend MP and AP to use materia, as well as either defend or dodge incoming attacks. There are different types of materia, with command skills consuming AP, magic ones MP, and the other offering stat boosts or other augments. Many materia from the original game made it into this entry, and many new ones were added such as Hell Blizzaga, Dark Thundaga, and High Jump, with most of them being interesting additions. The number of materia also increased exponentially since most of them were divided, with Fire, Fira, and Firaga being three different ones.

Unlike the original game, materia levels up really fast, and the main idea is to fuse it with others after mastering them to create even more powerful materia. To complete a simple but effective combat system, players can use healing items during battle. Players are evaluated after each battle, and their performance can mean a recovery of MP, HP, or AP depending on how they defeated their opponents. This nicely encourages players to have aggressive strategies, which include using a lot of MP or AP points, to receive bonuses for killing the enemies with no damage or with magic finishes, which can restore all the points they invested. Being rewarded ultimately turns a simple combat system into a flashy and smooth experience.

The distinctive touch in Crisis Core’s combat is the use of the Digital Mind Wave (DMW), three slots that spin automatically during combat and that grant buffs such as no MP cost for a limited time. The DMW is also in charge of limit breaks and summons since it includes both portraits of some characters and numbers; depending on the combination of numbers, players get certain positive effects, and if the three reels roll in the same image, players are able to unleash a limit break. As the story progresses, players get closer to characters and these limit breaks have more possibility of triggering. In addition, Zack’s and materia leveling up also depend on this wheel. While it is curious to level up this way, the DMW is a refreshing mechanic, and it adds an interesting element of luck to the equation that ultimately gives a distinctive personality to this battle system. 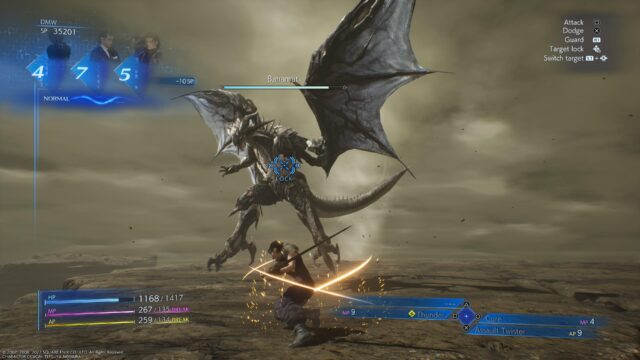 Battling against Bahamut is always a fun enterprise.

Visually is where the game becomes more distant to the original game released in 1997 and closer to the 2020 reimagining. The reworked 3D models make the game feel more recent, and it’s exciting to encounter detailed versions of normal monsters and iconic characters. The cinematics of limit breaks and summons is where the game looks the most impressive, featuring astonishing animations of classic abilities and attacks that certainly look spectacular. While iconic places like the Shinra Tower make a triumphant and beautiful appearance, other places that were visited in the original game but not in the remake, including Costa del Sol and Junon, look at their best, setting a precedent for the second entry of the remake. The newly arranged soundtrack and full voice acting work perfectly with the overall presentation. While the new tracks are good and create an immersive experience, music from the original game will definitely excite those who have listened to it. The soundscape as a whole is great but it isn’t as impressive as that of the original game or the remake.

Crisis Core -Final Fantasy VII- Reunion is a game that fans of Final Fantasy VII and its remake will enjoy since many loose ends are tied up and beloved characters make a triumphant appareance. The game in its core is short and simple, with a massive amount of side content that isn’t very inviting to complete, but the effort put in the remastered version managed to make it a good addition to the series. The game can work as a hype-increaser before the arrival of the highly anticipated Final Fantasy VII Rebirth or as a motivator to revisit the story of Cloud.