Note: This review is part one of three. Read part two here.

Final Fantasy Legend — or Makai Toushi SaGa as it’s known in Japan — was one of the Game Boy’s first RPGs. When I initially got this game as a child, thinking it was going to be similar to Final Fantasy on the NES, I was severely disappointed. Gone was the traditional experienced-based system of levelling up, replaced by random stat increases. The story was very bare, and the difficulty was intimidating at the time. However, little did I know there was a deep combat system lurking beneath this simple façade; players could customise their party from the beginning and further decide how the characters develop as the game progresses. Now released as part of the Collection of SaGa Final Fantasy Legend on the Nintendo Switch, players can now enjoy this classic once more with some new gameplay-enhancement features, a new orchestrated track, different UI options, and even the ability to play in Japanese.

The game begins by having the player create a party composed of humans, mutants, or monsters, along with the option to choose the gender for humans or mutants. Each race offers entirely different mechanics. Humans rely on strength, agility, or HP upgrades from shops to increase stats. Mutants gain stat growth and can learn spells through battle. Monsters can transform after eating the meat of defeated enemies. Players can mix and match the party combination however they like, choosing four humans or four monsters even. This freedom changes up the gameplay for each playthrough. 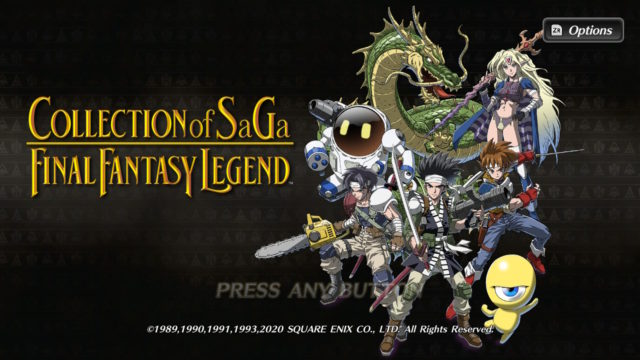 The title screen contains new artwork and an orchestrated track.

Not all races are created equal, as each has strengths and weaknesses. However humans and mutants have an obvious advantage over monsters. Humans start off slow and are very expensive to maintain at first, but by the end game, they can have the most powerful stats. Mutants can utilise equipment, but can also learn up to four abilities on their own; yet, how they learn and forget them is completely random, so players can have a completely useful spell one moment, only to have it replaced by something rubbish the next. Monsters often cannot keep up with mutants or humans, but transforming them in the midst of a dungeon will refresh their abilities, which make them last longer without the need of an inn. Furthermore, correct management of monster progression completely removes the need to grind and is ideal for players fond of speed runs.

The combat system is a standard, turn-based affair with a few changes. Weapons and spellbooks, which humans rely on, run out after a limited number of uses and will need replacement. Mutants and monsters have abilities that also have a limited number of uses, but they can be recharged upon resting at an inn. The inventory doesn’t allow for many items either, making item management very frustrating with limited weapons and ability usage. The excruciatingly high encounter rate also compounds this problem, because even a powerful party can face the risk of running out of weapons and recovery items before long. 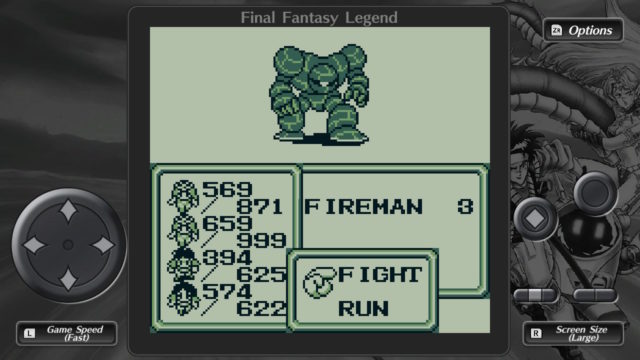 The story of Final Fantasy Legend is very simple. Many people have tried to climb the tower to reach a place called Paradise, but they all have failed. Now the player attempts to do so, encountering and helping a few NPCs along the way. The world does not explain itself very well, and there is very little lore to be found. Exiting the tower on the particular floor brings about a different world, some with towns, and some with hardly anything at all. RPG staples like character development does not exist in this game, as the player’s party members don’t have much personality beyond a few dialogue lines here and there. The townspeople will point the player in the general direction of where to go next, though some of the hints are very vague, but beyond that, the story quickly fades into the background during the adventure.

The graphics are passable for an early Game Boy title, though the map layouts look very bland and repetitive. There isn’t much variety in character sprites, and players will find NPCs that look the same as party members. However, those who were expecting a portable Final Fantasy game can find similarities in the graphic style, as the inns, weapon shops, and even magic shops bear similar sprite icons. The monster designs hold up well, even to this day, and are the best-looking aspect of this game.

Perhaps the strongest point of Final Fantasy Legend is the soundtrack, which is composed by Nobuo Uematsu of Final Fantasy fame. Almost every track — even in its limited chiptune format — boasts a catchy or memorable melody, and the title screen track “The Legend Begins” is an all-time epic. The overworld theme is one of the series’ best, and it’s quite a shame it isn’t used more in the later games. The only complaint on the soundtrack would be the repetitive loops and the limited number of tracks, but the few tracks work amazingly well within the scope of the game. The Collection of Saga Final Fantasy Legend version also includes a new, orchestrated track that is a medley of all three games combined, which is a nice addition, though players will only hear this on the title screen and main menu. 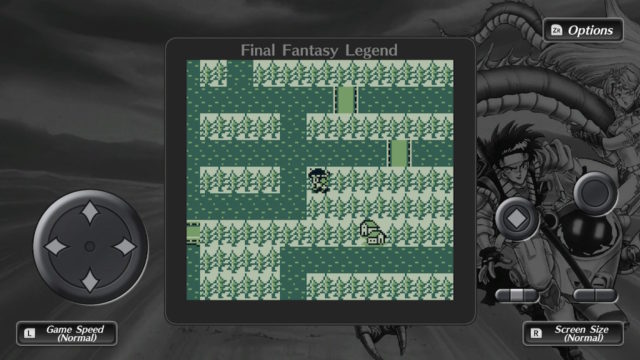 The graphics contain repetitive use of the same tile sets.

The localisation is not bad, as it mostly uses the same script as Square’s initial Game Boy release. However, Collections of SaGa boast a few changes to the text compared to the original in both the English and Japanese versions. In the English version, the ‘Strong’ potion is now called ‘Muscle’, whilst the ‘Air seed’ became simply ‘Air’; why these two were changed is baffling. The changes in the Japanese version made more sense to avoid copyright infringements as there were item and monster references to Dungeons & Dragons, Mickey Mouse, and even Gundam. For example, the enemy called ‘Beholder’ is now renamed to ‘Death Eye’, and the ‘mobile suit’ is now a ‘mobile machine’, and the katakana for ‘light sabre’ was slightly altered to avoid the reference to Star Wars.

Besides some minor text changes, players have a few UI options to play with. One is changing the background, which depicts the art of the first three SaGa games. Another great option is the ability to play the Japanese version, which also reveals the original artwork covers of the Game Boy games in Japan. Players can also undock the Switch and change the screen to vertical mode to mimic the original Game Boy set up when using the touch screen, including adjusting the size and location of the on-screen touch buttons. The most useful options of the lot are for adjusting the screen size of the Game Boy display and the ability to speed up the game play. This doubles the speed of the game, but doesn’t increase the speed of the music, and is a much welcome addition. 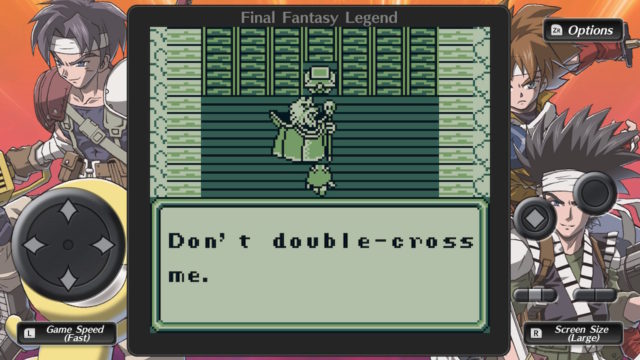 There are several different background illustrations and designs to choose from.

Unfortunately, Collection of SaGa Final Fantasy Legend left out many important things for a ‘collections’ type of port. First off, there is no manual or tutorial, so players will have to resort to an online guide to figure out some of the mechanics, which is not explained in the game. The collections is also lacking a museum feature, which would have been nice for those wanting to see more of the original art or listen to the game’s soundtracks separately. The worst culprit is the exclusion the definitive version of the first SaGa game, which was released on the Wonderswan Color. That version not only had better graphics and sound whilst remaining faithful to the original, but improved the system’s UI greatly. This was a missed opportunity to port a Japan-exclusive to the West.

Overall, The Final Fantasy Legend still holds up well enough, but it is the weakest game of the Collection trilogy. The party system is heavily unbalanced, the story is almost non-existent, and the high encounter rate heavily pads what is relatively a short game. RPGamers looking for good characters and story are better off passing on this and jumping straight to Final Fantasy Legend II or Final Fantasy Legend III, instead. Those who like tinkering with party combinations will find some enjoyment here, as the game can provide a different playthrough experience each time, especially for those hardcore enough to complete the game with a party of four monsters. Despite all this, the game is repetitive and becomes stale rather quickly, but fortunately, it’s a rather short journey. 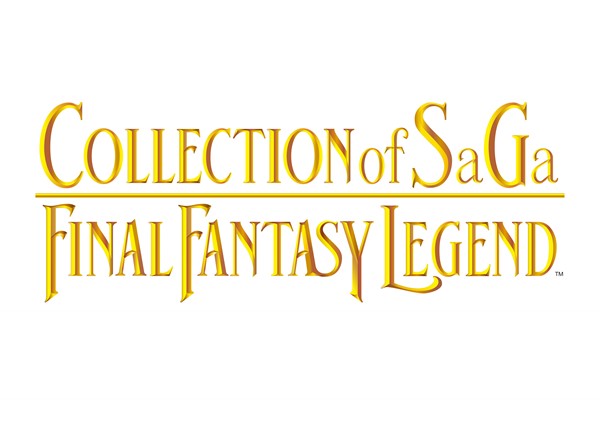