The Team That Goes by Code Name S.T.E.A.M.

Stop me if this sounds weird: in an alternate nineteeth-century world, President Abraham Lincoln faked his assassination so he could drop out of the public eye in order to assemble a special team of characters from classic literature and folklore to fight off an invading force of H.P. Lovecraft-inspired aliens using steampunk weapons and vehicles. Who knows what got into the minds of the folks at Intelligent Systems when they thought of Code Name: S.T.E.A.M., but does this game have more going for it than an awesomely crazy (or should that be crazily awesome) premise? Fortunately, while S.T.E.A.M. is a departure from the developer’s usual strategy titles, its very suiting graphical design, well-thought-out battle maps, and challengingly engaging combat make Code Name: S.T.E.A.M. a great game.

The premise may be offbeat, but the game’s plot is fairly straightforward. From its beginning with alien invaders attacking London’s Steamgate Bridge, until the final confrontation in the enemy lair’s heart, there is little to surprise the player or introduce complexity. With the Silver Age comic book aesthetics and exaggerated characters, though, the simplicity is fitting. The game embraces its campy tone, which makes it engaging enough to get the player from one map to another. There are also references to literature and history (other than the characters themselves) that are cleverly used. However, some more nuances to the characters’ personalities and backgrounds would have been appreciated. There are glimmers of interesting characterization in how they speak and interact with each other, but it is a step down from Intelligent Systems’ Fire Emblem series.

What really carries this game, though, is its excellent turn-based strategy combat. Each of the four active team members has a limited number of steam units per turn. Steam regenerates each turn in amounts that depend upon the type of boiler a character has equipped, and its replenishment is vital because both movement and attacking deplete the resource. Characters can backtrack if a player wants to better position them or to pick up items, but activating a weapon, being healed, or getting hit by an enemy attack uses up steam until the next turn. Proper steam allocation during a battle is especially important for the game’s Overwatch mechanic. By leaving a small amount of steam in the tank during an enemy turn, characters can attack or counterattack a foe when it crosses their line of sight. Killing an enemy caught of guard is immensely fun. Each character also has his or her own unique weapon, such as John Henry’s Bear Grenade launcher and the Fox’s sniper rifle, which can be matched with one of several sub-weapons. Many of these arms are unlocked by collecting medals, with the weapons on offer ranging from standard guns with low steam output to land mine layers and healing rifles. This all makes for multiple ways to tackle maps and enemies. In addition, every character has a signature ability that can only be used once per battle, which can not only aid in a decisive battle, but wonderfully play up the unit’s personality. It is very satisfying to come up with a combination of characters, boilers, and sub-weapons to be triumphant on a tricky map. The variety of mission objectives, such as rescuing civilians frozen in ice and defending a point from a slowly approaching giant explosive alien, are a plus as well. 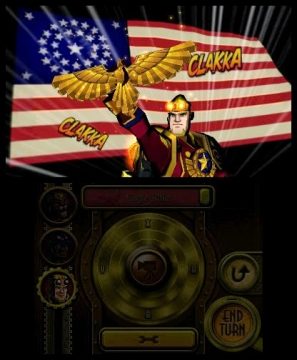 A high degree of planning will be needed, as this game and its enemies don’t pull any punches. The battle maps are ingeniously designed to be used for maximum advantage by both sides. Enemy AI is also startlingly competent, being capable of using multiple units to push an ostensibly hidden player character into range of deadly force. Enemies have their own Overwatch abilities, and the game provides no indication as to the range or activation of this status, which can be a cause for some frustration. While the battles can be hard and occasionally irksome, they never feel impossible. Indeed, even if a map needs to be retried multiple times, it feels rewarding to come back with a different character or weapon rather than frustrating. Later maps are arguably easier than in the beginning due to having more options to take into battle. Even so, fights still present a reasonable and engrossing challenge throughout the game. The lack of any overhead view or way to see the entire map at once could be frustrating for some people, as enemy ambushes and points where they spawn could be missed. This does teach players to go through maps carefully, though. If need be, the difficulty can be mitigated by creating a permanent save during battles at the possibly-acceptable cost of some medals collected on the map. Choosing to instantly restore one or all characters to full strength at a save point will deplete increasingly more medals.

S.T.E.A.M. mixes in light third-person shooter elements that serve to make the game more engrossing. The majority of alien types have a glowing weak spot on their bodies. Killing a foe in one shot to the back with the Fox Rifle is quite exciting, as is using well-paced explosives to expose a weak point. Enemy Overwatch can even be mitigated if a player’s trigger finger is quick enough. While the over-the-shoulder camera view is limiting in some respects, it also aids in immersion. The action and exploration feel more personal and thus more engaging.

In addition to the standard maps, there are battles using a giant mech called the Anthropomorphized Battle Engine, or A.B.E. for short. While President Lincoln piloting a giant steam-powered robot in his likeness sounds incredible, the fights are a bit dull, as they involve little strategy and much button mashing. The main campaign runs about twenty to thirty hours, but after completing it, players can replay maps for a higher score. There are also three types of multiplayer mode: Death Match, in which the first team to wipe out the other wins; Medal Battle, which the one who collects the most medals in five turns wins; and A.B.E. Battle, where both players fight each in their own mechs. Death Matches are the most entertaining and engaging of these multiplayer modes, though the time limit of one minute per turn is restricting. 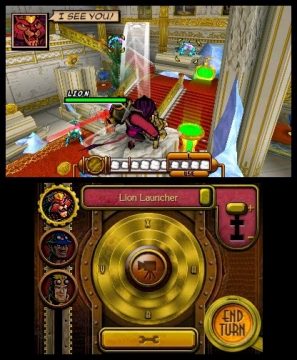 Prepare to hear that phrase often.

The controls are as responsive as they should be. For this review, the game was played on a regular 3DS rather than a New 3DS XL or with a Circle Pad Pro, and thus lacked an additional analog nub to control the camera. Even so, using the stylus or the face buttons to look around and aim does the job well, although shots may miss inexplicably on rare occasions. The camera can get a little confused during enemy turns as well. A recent update allows enemy turn speed to be doubled, or tripled on a New 3DS, to make these phases zip past. This can be toggled at will so that if players want to make note of where the aliens move, they can.

The Silver Age comic book aesthetics extend to more than just the art style and character designs. Story scenes are depicted as if they were pages of a comic book, including being framed by panels. The limited animations, speech bubbles, and sound effects written out in large lettering all add to the comic book framing device and to the game’s endearingly campy tone. The backgrounds during battle, although a bit pixelated, are vibrant and well-detailed. The 3D is used to great effect, especially during story scenes.

The soundtrack is mostly metal based, with an emphasis on percussion that appropriately evokes industrial machinery. The music pieces that play during the player phase are arguably more memorable and powerful than enemy turn tracks. The music is dynamic, sounding more intense or becoming more complex depending on the flow of battle. The patriotically cheesy vocal song “Code Name: T.H.E.M.E” is also rather catchy. Overall, the soundtrack isn’t as strong as some other titles on the 3DS, but it suites the game quite well and has several decent-to-excellent tracks. As for the voice acting, most of it is quite good and fittingly exaggerated when it needs to be. The in-battle quips may get a bit repetitive, though.

Code Name S.T.E.A.M. makes a strong showing for a new intellectual property. The battles are addictively fun with deep tactics, challenging gameplay, and imaginative maps and objectives. S.T.E.A.M. does lack somewhat with its story and characterization, but its strong combat makes up for it, and the game’s aesthetics suit its decidedly absurd premise. The people at Intelligent Systems have already shown with the Fire Emblem and Advance Wars series that they known how to make a good strategy game, and that is further indicated by Code Name: S.T.E.A.M.