Wizardry Goes to School and Learn How to Be Fun

First-person dungeon crawlers are defined first and foremost by their obscene, soul-crushing difficulty and penchant for not divulging key gameplay mechanics. The fact that they are in first person and involve taking a band of player-generated adventurers into a tile-based dungeon is an afterthought: something that controls the title of the subgenre without revealing why so many sane gamers abandoned it in the 80s. But what if no one told you that first person dungeon crawlers should only appeal to masochists? Class of Heroes, a game so popular in Japan that it is already available as a Greatest Hits title and has a sequel coming out later this month, may well be the first playable, enjoyable, approachable, and universally fun game ever to grace this oft-maligned subgenre.

Class of Heroes features an open class and race system for generating adventurers. Since the plot revolves around an adventuring school for teens, “classes” are called “majors” and “adventurers” are called “students.” During character generation, the player can choose between ten different races, two genders, three alignments, and fifteen majors. Naturally, race and gender are permanent, but alignment and major can be changed in the school. The process is completely transparent; the requirements for each major are displayed before a student is finalized, and every major is available from the start of the game. Bonus points are provided to modify the base stats, so the randomness affecting a student’s starting abilities is straightforward. In other words, there are no mystery classes, no secret, hidden requirements for class changes, and if the player wishes to reroll for higher stats, only one number needs to be glanced at.

The most interesting aspect of creating adventurers comes in the compatibility between races. The manual contains a chart showing how well races get along with each other. Elves do not like dwarves, sprites do not like other sprites, and so on. It adds an important consideration to crafting a full party of six students. While the diabolos race has the highest base statistics, it has by far the worst relations with other races. Adding one or two to the party will make it stronger, but destroy the party’s affinity. The developers did an excellent job balancing the pros and cons of each race while providing diversity between them. In case this seems overwhelming, a handful of ready-made students is available for the player to utilize.

The students provided with the game are more useful, however, because they are at level two while newly created students start at level one. It seems like a small difference, but the first several hours of the game are also the most difficult, and even that small edge helps. When the player ventures into the first dungeon, his pitiful party will be equipped with weapons so pathetic, it comes across as an intentional joke. Full sets of armor with a defense value of zero, back row fighters with short-range weapons incapable of reaching any foe, and mages who can only cast one spell before needing to sleep in the dorms are all hurdles in the beginning. Fleeing back to school after barely surviving three or four battles is commonplace for what seems like too long at first, and the challenge is overcome not so much by leveling up, but rather by taking advantage of item crafting. 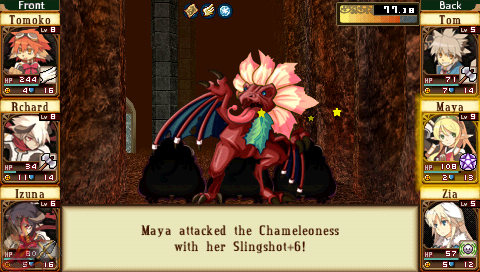 Someone went a bit crazy upgrading a slingshot.

The school’s science lab allows junk found after battle to be combined via alchemy into equipment and items. Alchemy formulas, like the requirements for majors, are set and transparent with no surprises or failed fusions. Although the player can purchase formulas from shops, they are easy to figure out once the pattern behind combining junk and materials is ascertained. Alchemy can also increase the offensive or defensive power of equipment. In all, it combines luck and choice in a smart manner. Alchemy ingredients come from enemy drops, which are random, but because the same materials are used to create new items as well as to improve old ones, the player always has some choice regarding what to create or upgrade. One issue here is that getting the materials to forge the long-range weapons that make the game easier falls to luck. When the party’s back row fighters are finally equipped with slingshots and bows so they can assist in combat, the game’s fair difficulty kicks in, and the experience goes from Etrian Odyssey-like to “This is actually fun!”

The battle system is a streamlined, turn-based deal, with the biggest twist being how rows are handled. As previously alluded to, the range of a party member’s equipped weapon affects which enemies she can target. Give a thief in the back row a knife, and she is useless. Give her a whip, and she can attack the front row of enemies. Give her a bow, and she can attack any enemy no matter which row it occupies. Monsters are also formed into rows and follow the same attack rules. Over the course of several battles, a tension gauge slowly fills, allowing the party to use gambits. The selection of gambits available depends upon which, and how many, party members are alive, and helps balance the difficulty with a quick way to wipe out foes, prevent them from doing damage, or the ability to immediately escape from combat.

The dungeon crawling itself is enjoyable with a great pace and feel. The interface is excellent in the labyrinths — load times are minimal, the UMD rarely spins, an automap captures all important information, and the X button can be held down in combat to zip through menus and pop-up windows detailing every action, thereby keeping battle times down. The encounter rate is chaotic enough that it is possible to walk a couple dozen steps without fighting monsters, but then have two encounters in the next five. Danger zones with a higher encounter rate are clearly denoted. The mazes themselves employ a small, consistent number of tricks, but implement them in such unique and devilish ways that the player is regularly kept on his toes. Even late in the game, surprises are in store that showcase the creativity and cruelty of the designers. 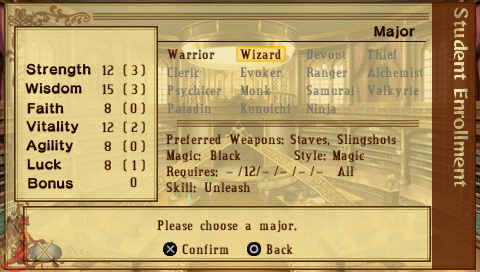 Labyrinths are paths with a left and right entrance that run across the land. Upon entry, each floor is selected randomly from a pool of preset layouts. A magic lock hidden somewhere on every map will open a shortcut between the left and right entrances to the floor, allowing the player to quickly bypass the meat of the dungeon each subsequent time that layout is encountered. There are frequent warp points, and battles are easy to run from. If the situation gets dire, escaping back to safety before dying is an easy process. The game can be also saved at any time outside of combat. Overall, it is obvious that the developers want traveling through the dungeons to be an enjoyable experience.

A few hardcore mechanics are still present, though. Some statistics are poorly explained. When a student levels up, the infrequent stat gains are highly random, and it is difficult to tell what, if anything, controls the increases. When a student dies, reviving him can potentially fail. Two consecutive failed revivals will delete the student forever. Sprung traps can wipe out the entire party. When the whole party falls, rather than boot the player to a game over screen, he will be kicked back to the school interface. In theory, multiple parties can be leveled up, equipped, and maintained so that when one dies, another can find its corpse pile and revive everyone. Fortunately, all of these mechanics can be addressed with ease. The undefined statistics do not hold back the gameplay. Always save before reviving someone. When a party dies, if one chose not to go through the effort of keeping a spare set of students around, simply reload. It is good that these mechanics are there for people who like them, but ultimately they do not have to affect the difficulty of the game.

Class of Heroes succeeds at being a solid, well-balanced first person dungeon crawler. Once the challenging beginning is passed and the intricacies of alchemy are understood, the difficulty curve is fair and smooth. The dungeons are engaging and creative. Changing majors is pain-free with more pros than cons, thus encouraging experimentation to find the best combination for the player’s style and preferences. The main quest can be completed in around fifty hours if only one party of students is used, but the length doubles when the mammoth amount of postgame content, including new dungeons, enemies, and quests, is undertaken. The story is mostly nonexistent, but what little there is glows due to a typically excellent localization from Atlus USA. The side quests, though few, feature hilarious dialogue and scenarios that will make the player wish the source material had more text built in, just so Atlus could showcase its abilities more. The graphics and sound are functional without being good or bad. One highlight is the unique monster design. Those tired of the standard depictions of ogres and ghosts and whatnot will see a new artist’s interpretations here, which is nice.

Class of Heroes is about the gameplay, though, not the story or visuals or sound, and it triumphs magnificently. If Etrian Odyssey showed that English-speaking gamers are willing to dip into the subgenre, Class of Heroes shows that the subgenre can actually be fun, and it is no wonder that the game was so successful in Japan. Finally, an approachable Wizardry clone is available for those turned away by the brutality of Dark Spire and the childish simplicity of Shining in the Darkness. Anyone looking to try out this type of game would be best advised to start here.