Circus Electrique is a steampunk, turn-based, circus management RPG developed by Zen Studios and published by Saber Interactive. At first glance, this game will appear remarkably similar to Darkest Dungeon and at second glance, well, it is. While Circus Electrique attempts to provide its own unique twist to various elements, it finds varying levels of success.

The game’s story takes place in a steampunk version of Victorian London with players taking on the role of the journalist Amelia. Amelia witnesses an incident that causes many citizens of London to turn into murderous killing machines simply called Vicious. She connects with her estranged uncle, the current ringmaster of the Circus Electrique, to try and understand more of what is occurring in the city. As the Vicious continue to rampage through the streets, Amelia journeys out with her trusty lion sidekick Leonidas and a band of circus performers to take back London and unravel the mystery that caused this sudden violent turn.

The story of Circus Electrique, if nothing else, is unique. The setting of a steampunk version of late 1800s London is decently realized and there are some interesting backstory developments as the game reveals more about Amelia, her uncle, and other non-combatant characters. That’s about as interesting as the story gets, however. While the main protagonists help push the narrative along, the circus performers doing the work are disposable with no real emotional connection outside of any that players assign to them themselves. While similarly structured games are prone to taking this direction, it feels like a missed opportunity to do something greater.

The game’s aesthetic choices during important narrative moments also leave a lot to be desired. During battles, character models are extremely well-animated, with clowns throwing water balloons before giggling into their hands and snake charmers wiggling their hips and other body parts. The cast of characters was surprisingly diverse, with a strong mixture of race and gender on display depending on the circus performer’s type. However, while the actual narrative uses well-drawn stills, it is missing the visual flair present elsewhere. These stills often take the life out of the already less than compelling story, which is a shame as the voice acting on display is rather well done. 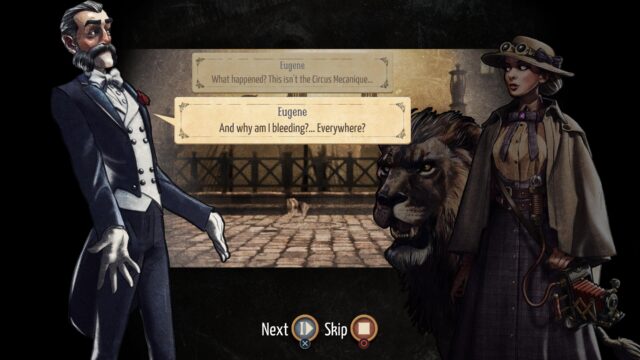 Amelia questions Eugene on the events that have transpired.

Both the protagonist and her uncle have rather lively conversations with inflections perfectly portrayed by their voice actors. The voice acting particularly shines during interview sections where Amelia questions other characters about events in the present and their past. Both sides of the conversation hit a wide range of emotions from subtle jabs through subtext to overt self-loathing for past events. While less enjoyable, each circus performer also has several voice lines they’ll spout out in battle which add a little to their character. In contrast to the excellent spoken dialogue, the soundtrack itself is nothing to write home about. While the circus music is certainly there to add to the general ambiance and theme, the tracks won’t be featured in a jam-time playlist any time soon.

Gameplay in Circus Electrique flows from a hub where players will manage their circus, to an overworld where the party will explore London to acquire loot as well as resources needed to continue to operate, before finally encountering a battle in the overworld where they’ll test their might. Once battles end, regardless if the result was victory or defeat, the day ends and players return to the hub to start this cycle over again. While the many aspects of the gameplay cycle can become overwhelming at times, at a high level, it works fairly well with plenty of guard rails and tutorials to help players along the way.

The hub area is primarily the resource management section of the game. As players progress, more tents are erected on the circus grounds, giving access to new combat options and ways to improve their circus performers. Each tent can also be upgraded in exchange for resources to further bolster its effects. Early on, only a train, a clinic, and the main circus tent are available. The train brings in new circus performers that can be recruited to the player’s roster in exchange for some silver and a daily meal. The clinic serves as a way to rest injured circus performers so they are ready for battle the following day. Finally, the main circus tent provides probably the most distinguishing aspect of Circus Electrique: circus shows.

It wouldn’t quite be a circus if the performers didn’t perform. Each day, players can choose from a variety of circus events to hold and then assign circus performers to that event. As players progress, more events are added with heavier requirements but they all function in a similar way. Each circus performer has four performance stats in addition to their combat stats and each show requires a combination of those stats to be met before it can take place. As performers are added to the show, players will need to keep an eye out to ensure those stats are met and that the performers chosen work well together. 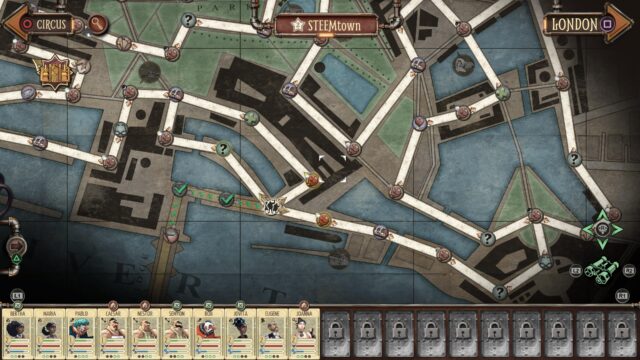 There are plenty of paths to take in the overworld but they require consumable items to see them all.

Each performer has preferences for whom they work with. Lining up performers who like each other increases the success of the show while performers who hate each other lowers it. This requirement is further compounded by alignment types. Each slot of a performance has a symbol that if matched to the performer will again boost the success of the show. As one can imagine, balancing so many spinning plates, and doing so again and again, is extremely difficult to do with any reliability.

While the idea is a novel one, as the game goes on, the higher-level shows require more performers that fit into the performance parameters, which leads to suboptimal setups for the combat gameplay as performers assigned to shows also cannot be used in battle that day. Each show can provide rewards such as performer experience, money for the circus, or overall circus experience, which is used as a cap for all of the circus tents and upgrades. The move to gate this content off with so many requirements effectively forces players into refreshing the train to find characters with high-performer stats rather than those who are efficient in battle. Overall, the hub gameplay is decent but there’s much to be desired.

The overworld is broken into sections of London that are large self-contained gameboards with an ultimate goal for the area at the end. Players move along tracks into spaces that contain loot, mini-games, and combat encounters. As players progress, however, there are sometimes forks in the road, and going down either path will close off the other routes that can only be unlocked by using an in-game item to redo the whole board. This is a very frustrating design choice as later in the game, some paths contain characters that are only unlocked by bumping into them in the overworld, effectively forcing players to have to go out of their way to replay an area to see everything the game has to offer.

Like other aspects of Circus Electrique, battles end up rather mediocre. Players choose up to four circus performers for their adventuring party, with the battle beginning when they bump into one of the combat encounters on the overworld. These battles typically include four enemies with different traits for players to uncover and take advantage of. Each circus performer has six unique moves assigned to them based on their class, which can be leveled up to improve their effectiveness. These moves vary from restoring hit points, to dealing damage to the enemy, offensive and defensive buffs, and beyond. Each performer’s specialty is clearly shown in their tailored moveset. For example, the firebreather has plenty of fire-specific moves while the knife thrower, well, throws knives. 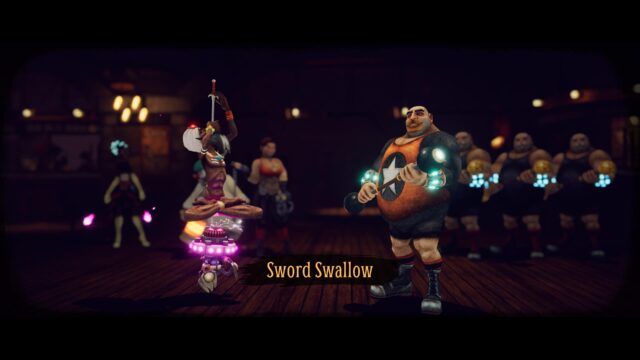 A circus performer stuns an enemy with style.

An additional wrinkle in combat comes from positioning. Party members gain or lose access to some of their moves depending on their placement in the party’s formation. This is further affected by some performers and enemies having the ability to move characters around. All in all, there are a lot of combat options in Circus Electrique, but the most interesting aspect is its resource management. Both circus performers and the Vicious have HP and devotion. While HP is self-explanatory, devotion is a bit more nuanced.

Devotion is used to power up moves, improve accuracy, and if raised high enough can trigger an enlightened state that makes circus performers perform even better. The lower devotion is, however, the more likely circus performers are to enter a lowered performance state, and if devotion hits zero they flee the battle entirely. This works both ways though, so if an enemy has very high HP but low devotion, players can use moves that lower devotion instead and force the enemy to flee. Early on, winning battles by whittling away devotion is very rewarding but unfortunately the game has a severe issue with its difficulty balancing.

The early hours of Circus Electrique are not challenging, with most battles being won by spamming moves or destroying the enemy’s devotion. However, later in the game, the difficulty spikes significantly and enemies begin having huge HP pools and both high devotion and dodge rates, making them far harder to defeat. Even with performers at the same level as the Vicious, the damage done to the performers compared to that done to the Vicious is hugely in favor of the enemy. While the challenge is welcome, unfortunately, it isn’t consistent. High-difficulty battles are followed by battles so easy they can be won by a single performer. This odd difficulty yoyo will cause many players to lose circus performers, which will likely result in them giving up completely or turning back to older areas to over-level instead.

Unfortunately, conflicting design choices are the cause of most of Circus Electrique‘s problems. While there are certainly some great ideas here and there, they’re almost immediately offset by poor ones typically derived from the overcomplication of mechanics. The convoluted circus events and the gating of paths in the overworld are good examples of this haphazard mentality, as adding the additional requirements to both makes neither enjoyable to navigate. However, players looking to explore a steampunk version of London with a gang of clowns or just enjoy a traditional turn-based combat system with some unique flair may find some fun to be had here.

Andron joined RPGamer as a volunteer reviewer in 2022 and is an aspiring novelist. His favorite RPG of all time is Grandia II and he'll duel anyone to get it remade (or at least finally get a fourth installment to the franchise).