Throughout my childhood existence, I was a product of daycare. My mother has been working in daycare for over thirty years, and has often had many amazing stories to tell. Daycare is where many kids develop their social skills and an explorative sense. Whether it is wearing a towel as a cape or eating sand from the sandbox, children have the ability to make anything and everything a grand adventure. Bonded Realities is a little RPG on the Xbox Live Indie service that pays tribute to childhood wonderment, but suffers from wanting to be something it’s not.

Players take on the role of a main character that has just arrived at childcare. He decides to go out and play before his nap, and chooses to have a bit of fun in the sandbox with his friends. Suddenly, the children are whisked away to another world where they have become the heroes as which they’ve often imagined themselves. However, upon entering this new world, they have all been separated from each other, and it’s up to the main character to reunite with his friends and find a way home. 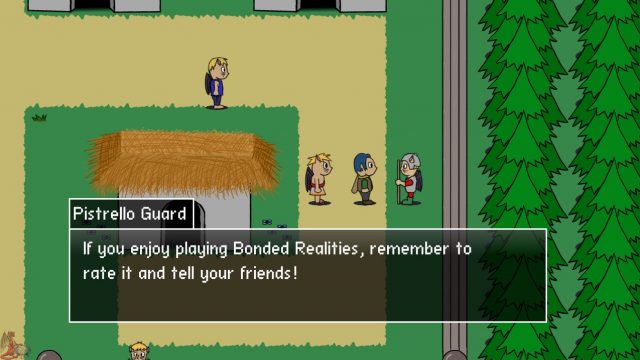 One of Bonded Realities‘ strengths comes from its writing. It’s cute and silly, making no pretense about taking itself seriously. There’s a lot of charm, and it’s amusing to be able to interact with just about everything and have some witty remark appear. There’s also a great use of puns for the enemy names that players will encounter, such as “Eye Phone.” While the dialogue is genuinely charming, the writing seems to consciously channel the 1994 Super Nintendo title Earthbound, which also featured quirky dialogue filled with dark humor.

Part of the problem with Bonded Realities is that although it is paying homage to Earthbound, it borrows almost too much from the game it idolizes. The dialogue possessing almost the same feel as Earthbound is one thing, but moreover, other elements such as a limited inventory and the use of Power Points (PP) for performing skills are also borrowed. Combat itself is a very straightforward turn-based affair with a “press A to win” style. It’s tedious and repetitive, requiring barely any thought when inputting commands, which is a shame. Although combat is repetitive, it moves surprisingly quickly and leveling up is also a rapid process. However, everything is fixed when gaining levels, granting no customization aspect at all to the game. Unless a player is fairly underleveled, random encounters are a complete breeze, and death results in nothing more than being transferred back to the last save point with full health. The only punishment to speak of is that they lose all the experience points they’ve gained towards the next level. There’s just not much to rave, or even comment, about in the combat system. 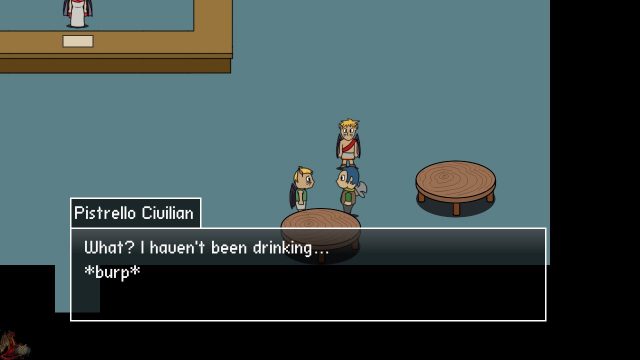 The same can be said about the game’s interaction. Although interacting with just about everything is possible, there’s not a ton to really do. NPC’s spout off lots of great one-liners, which is all well and good, but there’s got to be more to character and world interaction than just showing off quirky writing. One thing done well is that the game is very accessible. The game’s menus are clean and easy to use, saving can be done at any time, and players can acquire a smoke bomb that allows random encounters to be turned off. In a lot of ways, the game has striven to be enjoyable to all types of gamers, and that is certainly commendable.

One major highlight of Bonded Realities definitely comes from the game’s music and sound. There’s a lot of variety in tracks, and none of the music ever feels annoying or irritating even as it loops. There are definitely a lot of great songs, and even the game’s small use of sound effects is done quite well. Visually, the game is a bit of a mixed bag. The hand-drawn art style works incredibly well with the game’s overall story and dialogue, and the animations are done nicely. However, the visuals fall flat on the battle screens, which are static, dull, lacking the vibrant liveliness found in the rest of the game. Although each enemy is drawn as their pun-ish name states, they aren’t exactly the nicest enemies to look at, and the plain black background doesn’t do them any favours either.

Bonded Realities takes about three to four hours to complete. There’s not a lot of replay incentive, but for a dollar (or 80 Microsoft Points), there’s enough charm here to make it worth your while if curiosity strikes. While it is charming and somewhat genuine, its similarities to Earthbound are almost uncanny, to the point where it really takes a hit on the game’s overall originality. I did enjoy my time with Bonded Realities, but the lack of difficulty drags it down, and it needed to depart more clearly from the game it was clearly paying homage to.