I Will Never Give Up Making Average Games!

Like Final Fantasy XII: Revenant Wings before it, Blue Dragon Plus is a DS strategy sequel to a traditional console role-player. Both games serve as somewhat of a denouement to their respective story arcs, trying to tie up loose ends and provide some additional insight. In Blue Dragon‘s case, since the original was so light on plot, the DS follow-up tries to inject some backstory to give more shape to the original tale. Departing from the original game’s genre was a risky move, but Blue Dragon Plus delivers a solid, addicting title that retains the feel of Mistwalker’s first game while never really breaking out from the crowded pack of strategy games on the DS.

For those that have not played the first game, Blue Dragon Plus has helpful introductions for each character that bring the story and world quickly up to speed, but in the case of this review, discussion of the game’s basic premise might spoil the original for you, so just skip ahead to the next paragraph if that’s the case. The game picks up one year after the original game left off, and the universe is still filled with cube worlds that resulted from the opening of the world’s core. Things heat up again when an ominous dragon shadow appears on one of the cubes and Shu and the gang decide to investigate. It turns out everybody and their robot can use a shadow now, and the thought-to-be-defeated Nene might yet again be behind the confusion.

But Blue Dragon wasn’t a game known for its story, so many fans were instead keeping a weary eye on co-developer, Brownie Brown, as it disappointed some fans with Heroes of Mana and its terrible path-finding and grid-based system. Sadly, although some of these shortcomings have been improved somewhat, they are still present in a noticeable and frustrating way. The player has the option to select a single unit, all units, or to draw a circle around a group of units before choosing a destination or an enemy. That part is intuitive and convenient enough, but once the units start moving towards their destination, all order falls to the wayside and characters start frantically scrambling for any place to move, gladly walking in the wrong direction instead of waiting patiently. This annoyance is partly due to the fact that Blue Dragon Plus is grid-based; a choice that baffles the mind. Although not made by the same developer, Revenant Wings has been out long enough to serve as an inspiration for a functional non-grid style RTS and Blue Dragon Plus has nothing to benefit from not switching over. 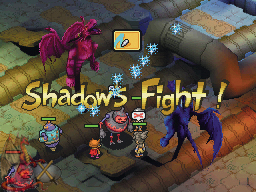 Thankfully the only gimmick.

Path-finding isn’t the only gameplay element affected by the unnecessary grid setup, however. Shadows make a return as a source for each character’s magic and special abilities, and this time each shadow acts as a distinct class. Some shadows will heal, some will attack, some focus on status ailments, and for all shadows that cast spells in a radius, this works very well, highlighting the affected characters and indicating if a certain element will do more or less damage to a particular enemy. However, spells aren’t so intuitive for those in possession of a shadow with magic that casts in a straight line. Because of the grid, characters have to line up perfectly with an enemy to cast certain spells and also have to be facing the right direction. If the requirements don’t match up, the spell is void and the player will have to try again. This becomes especially frustrating when trying to cast spells with characters who don’t necessarily have to face the enemy to perform a regular auto-attack, as it literally becomes a waiting game. The third major issue occurs when there are many characters to micro-manage, because there is no way to automate spells and it is impossible to keep up. Fortunately this rarely manifests itself because it’s only an issue when a battle takes place with a particularly large party, and the characters are split up for the vast majority of the game. There is also a silly, gimmicky stylus mini-game, but it is unlikely to show up more than ten times through the course of an average play-through. 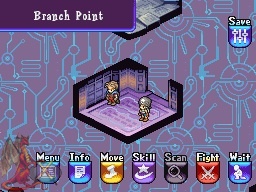 So much to do!

But enough about the faults, because Blue Dragon Plus can be quite an addicting game. Although the overworld is fairly small, the player is never forced to progress and this works in the game’s favour. The separate parties have the option to shop (in certain areas), search for items, wait a turn, fight a battle outside of the story progression, use field skills not unlike those in the original Blue Dragon, or move to another section of the map. That doesn’t even cover all the options either as there is also a deep menu system in which characters can equip weapons and shadows, switch parties, organize skills, and more. In fact, there is so much to do in Blue Dragon Plus that a player could easily and gladly stretch the mere 20 hours needed to blast through the main storyline. Rooms that continue the main story are clearly marked and there is never a scenario in which the player could accidentally trigger the story when she wouldn’t necessarily want to. Once in battle, aside from the aforementioned shortcomings, the touch controls work well and the camera is simple and smart. There are very few instances when objects obstruct the action. Some story sequences are context sensitive as well and some minor extra dialogue will occur depending on the order the player triggers story and which characters are in which party.

While I never really loved Blue Dragon Plus, I never got bored with it either, which is unfortunately more than I can say for many RPGs these days. It has a strong presentation with another great soundtrack from Nobuo Uematsu (although you may recognize a lot of it) with gorgeous, well compressed FMV scenes. But the fact is that although I enjoyed it, the game is not very memorable, the story still isn’t very enticing, and there are many other games on the DS to explore. If you’re really itching to play another strategy game, or you happened to really love the 360 original, Blue Dragon Plus will absolutely do the trick, but otherwise it’s another game that you shouldn’t feel guilty about skipping.