Back in 2008 or thereabouts, Seishi Kishimoto published a manga series called Blazer Drive in Shonen Rival magazine. It was apparently a short run, as it only ran for four collected volumes. Hopes were high at the beginning, however, as evidenced by the fact that Sega of Japan produced a spin-off game for the Nintendo DS and obviously put a good deal of effort into it. The game Blazer Drive runs parallel to the manga, with some characters shared and others created especially for it. Either way, the story doesn’t really do justice to them or to the milieu in which they struggle.

The City of Tokyo, as presented here, is a blend of every trope of futurism and creative city planning ever imagined, often with a complete disregard to things like the basic principals of structural engineering. Its thirteen districts are distinct to the point of not being logically possible to co-exist as neighbors, and include things like bleak deserts, wild jungles, permanent deep-freezes, an active volcano, a department store built into a world-tree, a retro Japanese town, a mock-up of the Venetian canals, and a reverse-gravity amusement park akin to something out of Final Fantasy VII. No two districts are anything alike, but they’re all beautifully rendered in CGI that matches or even tops much of the late-PSX era. The character models don’t work quite as well as they move around these environments, but those don’t see a lot of use in any case.

Amidst all this CGI extravagance, the protagonist Shiro and his sorta-kinda-but-not-really girlfriend Tamaki find themselves tossed into the great social upheaval of the day. The wonders of this brave new world are fueled by an energy-focusing technology that takes the form of adhesive seals — Mystickers, in local parlance — which constitute one of the most utilitarian approaches to magic seen in quite a while. The intro video sequence for the game makes a point of showing how one can cook an egg simply by slapping a fire Mysticker to the bottom of a frying pan, for example. Apparently it did not take long for some people to realize that if they apply that same Mysticker to their forearm, it allows them to shoot flames from their open palms. By the time Shiro and Tamaki get involved, Tokyo is in the midst of a crisis, as myriad gangs of sticker-toting Blazers rampage in turf wars and crime sprees, and only a group called the Guardians stands in their way. 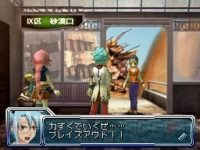 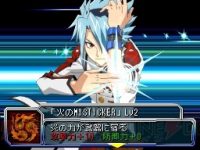 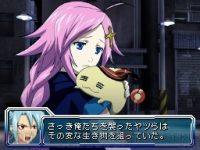 The actual plot of the game does not do justice to most of this. Very few characters get developed beyond the point where they join the Guardians, and the potential inherent to the Mysticker concept sees very little use beyond combat. This is a case where a few scenes of home life would have been very interesting, just to see how big an impact the techno-sorcery is having on everyday folk. Instead, the player is treated to a strictly mission-based setup, using the Guardian HQ as a hub, and cannot visit any area of the city outside of those missions. Thankfully, many missions are repeatable, allowing the player the opportunity to shop at the handful of specialty stores semi-regularly. Even better, there is a fair amount of variation between missions in terms of goals, parameters, limitations, and obstacles. No two are really alike, except in cases where the missions are part of a discrete series. Would that the developers could have knit together a better narrative from the crazy-quilt of options available, but at least it’s not boring.

The highlight of it all is the combat. The very nature of Mystickers in Blazer Drive lends itself to a card-based setup, and the game features a well-developed and versatile system to play with. Mystickers are separated in multiple ways: by element, by utility, and by rank. Some can only be used first in a sequence, while others need to have two or three Mystickers applied in previous rounds before they can activate. The game’s five elements provide some interesting synergies to strategize around, and plenty of Mystickers possess secondary effects that can make or break a build. Special item-type Mystickers can only be used if the player has the right combination of elements already applied, while each specific equipment Mysticker (magic weapons that become the character’s base attack) has its own finishing move available to slap onto the fourth rank spot. The combinations are vast, and the game encourages the player to switch things up with regularity, often imposing pre-constructed decks or limitations on certain elements within a mission.

As mentioned earlier, the 3D character models seen running around town don’t see a lot of use outside of that one aspect, and have absolutely no presence in the combat.  Instead, Blazer Drive makes use of dynamic portrait art to show Shiro, his sidekick of the hour, and the opposing Blazer(s), with cut-in splash art for various attacks and counters.  In practice, it feels much like watching an interactive manga play out. 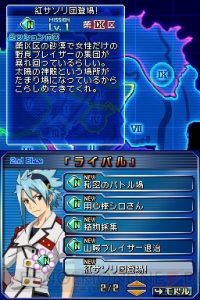 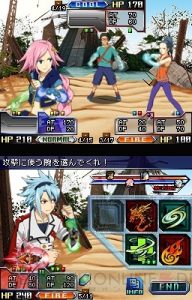 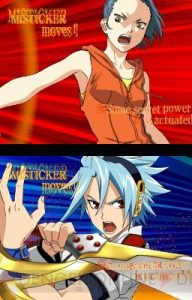 Perhaps the biggest complaint one can make about this title is that it’s heavily stylus-based. In battle, the player has to manually drag Mystickers to the appropriate arm, and there are frequent pop-ups for a subsystem called the Judge System that rules over such things as attack and defense bonuses, status effects, character combos, and even decisions made outside of battle. The only use any buttons see is for moving around in town, when the player can use the D-pad instead of the touch screen to direct Shiro.

There is, of course, a multiplayer setup for duels and training, but like most such things on games for the Nintendo DS it presumes a larger audience for the game than actually happened. Nothing is lost by ignoring the multiplayer functionality, which is more than can be said for many DS games of this period.

The music in this game is the joint product of Tomonori Sawada and Naofumi Hataya, and overall it provides a good accompaniment to the action and scenery. There’s also a fair amount of voice acting for major scenes, as well as a robotic announcer voice in battle. Several fully animated cut-scenes occur at critical junctures, often more for the coolness factor than to help make the plot or setting more comprehensible.

While the treatment of the plot left much to be desired, and the control scheme was often annoying, the combat helps elevate Blazer Drive above the crowd of card-system RPGs and into the ranks of games that are enjoyable to play for their own sake, without caring too much about the reasons why the heroes do stuff. The Mysticker library is vast and varied, allowing hours of tinkering for those so inclined, and the battles themselves are fast-paced and well-balanced. Really, that’s about all one could wish for from a manga-related title.