Fly Again on Your Wings of the Heart

Baten Kaitos Origins came out a mere two years after the original Eternal Wings and the Lost Ocean, and it largely passed under people’s radars. Already being a prequel to an obscure GameCube RPG, Origins came out in the twilight years of the console and didn’t have the benefit of riding on the coattails of another, more popular game from the same publisher (Tales of Symphonia). It’s a shame, too, because Baten Kaitos Origins is an excellent game that improves upon many aspects of the original.

Taking place twenty years before the first game, players again take the role of a Guardian Spirit, an etheral being from another world bonded to the heart of the main character. This time around, it is a young man named Sagi. According to folklore, you provide Sagi with power and wisdom, which he is going to need after having been framed for the assassination of the emperor of Alfard and encountering a strange, foul monster whose defeat seemingly sends Sagi to an unknown land. Though not immediately apparent, both events are linked to the researcher and politician Baelheit and his plans to become emperor and mechanize the rest of the world, by force if necessary. Spiriters like Sagi are said to sway the destiny of the world, so it is perhaps not surprising that it is up to him, his puppet-like friend Guillo, and a runaway, sheltered girl Milly to stop Baelheit as well as these mysterious monsters, which seem to be linked to the ancient evil god Malpercio.

Origin‘s story starts noticeably faster and stronger compared to the first game. While it has its fair share of JRPG tropes, they are used in creative, or at least not very clichéd, ways. The script is well-translated, especially compared to the somewhat dry writing of its predecessor. Also, although there are fewer party characters in Origins, a lot more time is spent on characterization, development, and often humorous interaction among the three. Even villains and NPCs, including several characters from the first game, are fairly fleshed-out as well. 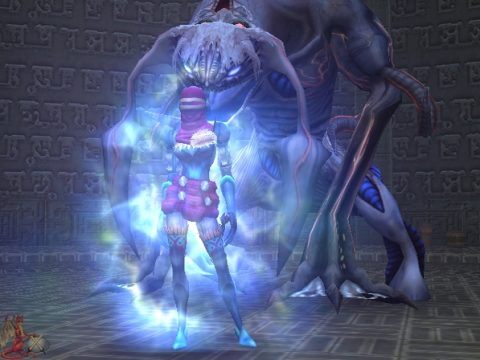 Malpercio or not, that monster is going to get it.

Although many changes were made to the battle system from the first game, the basics are still the same and most of said changes are for the better. Like the first game, attacks, equipment, healing, and the like come in the form of Magnus cards. Rather than weapon cards being used as attacks, they can be equipped at the beginning of a character’s turn. Players then have to pick Technique cards from weak to medium to strong, assuming they are available in the current hand for normal attacks. Picking regular attacks generates Magnus Power, or MP, which allows characters to add in powerful Special Technique cards, which are similar to the finishing moves in the original. However, depending on how much MP is available, characters can use two or more Specials in a row. Once one character is done attacking, it may be possible for the next character to follow up with a Relay Combo, dealing serious damage to an opponent. This occurs when the previous character ends with a Special Technique and the next character uses a weak attack card. Furthermore, cards used in a certain order may create combos which deal great damage and fill the MP gauge more than regular attacks. Though characters can no longer defend themselves during enemy turns, it is possible to equip a defensive item rather than a weapon to reduce damage.

Like the first game, the battle system’s learning curve is higher than the typical RPG. Still, it shouldn’t take too long to get the hang of. While technically a turn-based system, the cards following the first must be picked quickly before time runs out or else a character’s turn is wasted. Players may find this frantic choosing of cards exciting or frustrating. For the large part, though, battles in Origins are quicker and more streamlined in comparison to the first game. Those who played the original will likely love the new discard feature to dispose of unneeded cards as well as the Spirit’s ability to sometimes bring up much needed cards in a hand to help with the inherent randomness of card battle systems. Using opposing elements in the same turn will also no longer lower the amount of damage dealt as it did in Eternal Wings and the Lost Ocean. Some players may dislike all three characters sharing from one deck and the inability to use multiple healing items in the same turn. Battles themselves are not too hard, with bosses usually being more of a challenge, save for two or three very difficult bosses. It should be noted that for a good portion of the game, several boss fights cannot actually be won, but are stopped for story-related reasons. Overall, however, Origins has a unique and very engaging battle system.

As if developers finally realized that Baten Kaitos humans have wings, Sagi can use his to momentarily dash, jump up or down high places, and jump across gaps, making maneuvering through towns and dungeons quick and easy. Enemies can be seen on-screen and avoided, though sometimes areas are simply too narrow to truly dodge them. There are some minor puzzles in several dungeons, but for the most part they are not too hard to figure out. Players of the original game may be glad to find out that battle Magnus no longer age, which means the healing card you assembled won’t rot in a few hours, making one have to find another high-level healing card that won’t spoil as quickly. Quest Magnus, which are drawn from the environment and used to proceed through the game or do side-quests do still age. Speaking of assembling cards, to obtain unique cards, rather than playing Magnus in a certain order during battle, Quest Magnus can be combined in a device called a Magna Mixer. There are many side-quests to undertake, and thankfully there is a helpful sub-quest menu in the camp screen to help keep track of them. Players of the first game will also likely be happy to know that they no longer have to visit a church in order to level up. Like most other RPGs, characters level-up after a battle is finished and they have accumulated enough EXP. They do, however, have to visit the church to increase deck class level. The higher the class level, the more decks that can be kept. While characters can only share one deck in battle, players can build and switch between separate decks in the camp screen. Class levels also determine the size of the decks, the number of cards which can be discarded in a turn, and how much MP can be generated. 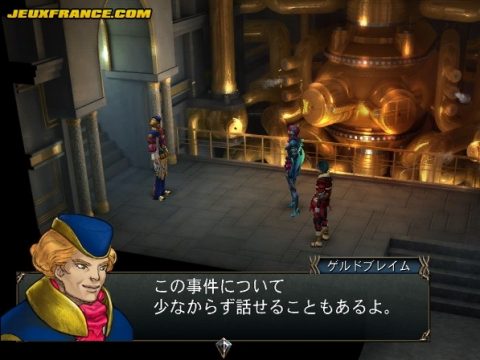 Remember Geldoblame from the first game? That’s his portrait in the text box!

The graphics are largely identical to the first game, featuring three-dimensional characters and foreground objects against a two-dimensional pre-rendered background. Said background is just as beautiful and richly detailed as the first game, though perhaps is not as colorful since the exotic locales of the island of Mira such as Parnasse, the village of sweets and the story book village Reverence cannot be visited in Origins. Character models are still a bit lackluster. While they are distinct and their movement looks more realistic, their faces are usually indiscernible. When the camera does zoom in closer, faces may look awkward or lack emotion. Thankfully, a variety of portraits in the text boxes make up for it, though the faces may detract away from scenes somewhat.

The music was again composed by Motoi Sakuraba and it is very similar in style to the original game. There are a wide variety of tracks in differing styles and moods, and many are quite beautiful and well-fitting. This soundtrack is easily some of Sakuraba’s best work. The voice acting is worlds better than the first game, which was infamous for not only having wooden-sounding acting, but also sounding like the actors were talking through tin cans. The actors and the VA director did an excellent job, with only a few hiccups now and then. Main characters and most NPCs and villains were equally well acted.

If you’ve played and enjoyed the original game, you owe it to yourself to play this one if you haven’t already. Not only can it be considered a better game than the first in many ways, but it expands upon the lore and history of the Baten Kaitos world, even turning several plot points and concepts from the first game on their heads. If you played and didn’t enjoy the first game, then give this one a fair shake since chances are it fixed what you may not have liked. Even if you haven’t played either game, Origins is among the GameCube’s best RPGs, being a prequel and overall great game. A series this good, and Baten Kaitos Origins in particular, does not deserve to be as overlooked as it is.