It Is a Good Pain

On May 14, 2032, the Blaze shredded reality, distorting the world into a warped, deserted place. To exist in this distorted world, humans must themselves become distorted. The mute protagonist, whose mind contains only an intense feeling of guilt, strolls up to the eternally shifting Neuro Tower where the apparition of an angel appears. The Archangel informs the protagonist that the twisted state of the world is his fault. The only way he can atone for his sin is to enter the tower, fight his way to the bottom floor, and use the Angelic Rifle to shoot and kill the Absolute God. Welcome to the world of Baroque.

Originally a Saturn game deemed too difficult or too unreligious for an American release, Baroque has been remade and ported a few times over the past decade. After the Japanese Wii release, Atlus USA finally decided to bring both the PS2 and Wii versions stateside. Baroque attempts the daunting task of being a challenging action rogue-like dungeon crawler with a bizarre sci-fi setting, and largely succeeds, although the strange and repetitive nature of the game is not for everyone.

The Archangel’s deicidal mandate is the one and only directive supplied in the game. No other advice or instructions are forced upon the player, and one is expected to divine the rules of the game mostly via trial and error. Either out of laziness or because the control settings differ depending upon which setup is used, there is no in-game help or menu option explaining how to operate the controls. The first visit into the Neuro Tower will begin with the player hastily smashing all the buttons to discern how to beat up baddies, open the menu, use items, and so on. Whether this opening endeavor ends in death or the completion of the tower, the short term outcome will hit the player like a sack of unloving bricks: the result will always be a soft reset of the game. Die, and start back in the Outer World at level 1, empty handed. Complete the tower, and start back in the Outer World at level 1, empty handed.

This is an important make-or-break element of the game. The repetitive task of eternally restarting the same randomly generated dungeon will seem torturous and Sisyphusian when viewed through traditional Final Fantasy-colored glasses. Baroque does something that few console games dare attempt; it establishes a form of permadeath by returning the protagonist back to square one regardless of when, where, and if he died in the dungeon. While playing Baroque, it must be viewed in the same way any other game with permanent death is viewed. The joy in playing should come from the dungeon crawling experience itself rather than from tangible rewards.

The dungeon crawling experience is unique and outstanding. Sting, the development studio known in America for Yggdra Union and Riviera, essentially took the quirky and addicting gameplay in old rogue-likes and transplanted it from an ASCII character graphics engine to a 3D action engine. Like the rogue-likes of yore, the initial difficulty spike appears insurmountable. The inability to defend and the unidentified nature of many items found on the dungeon’s floors will cause much tension and frustration at first. There is a learning curve, but all of the learning comes from experimentation and making mistakes. 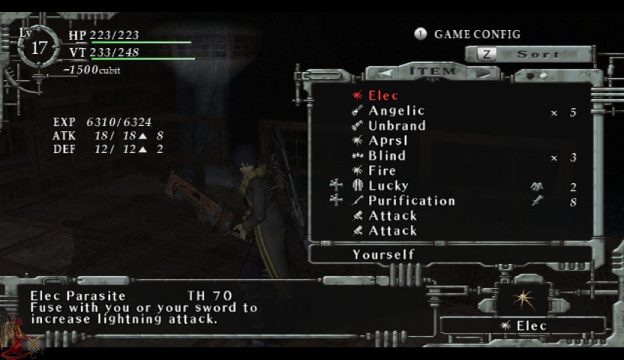 There are many strange items for your enjoyment.

The player struggles to maintain both a health and a vitality gauge at all times. The vitality meter constantly decreases. When it is empty, health decreases. When health reaches zero, the protagonist dies. Many items have multiple uses; for example, eating flesh will restore some health, but eating flesh when the protagonist’s health is full will increase his maximum health. Also, some items become significantly more useful when used in combination with another item, hence some bad items, like rotten food, can be held with the hope of finding an item it works well with, such as a restorative which “cures” rotten food. The inventory is a nice size: large enough to keep everything truly needed, but small enough that the player will regularly need to think upon which items to keep, which ones to leave behind, and which ones to use.

Unnecessary items can also be tossed at enemies, although using the remote and nunchaku will leave both wrists sore. Accurate item chucking requires one to use the index and middle finger on the nunchaku at the same time. The remote itself provides an inadequate number of buttons. There are three different ways to hold it during gameplay with none of them allowing fast access to all possible inputs. The remote-waggle is an important input itself, but the slight delay between the waggle and the onscreen action is noticeable and unfortunate in an action game.

While the items and their applications are varied and complex, the battle system is extremely simple. The protagonist has a standard combo attack, a charge attack, and a special attack that interrupts the enemy when it makes contact. Monsters have basic attacks and special attacks too. Eventually the player will learn how best to tackle the various enemies, which weapon and equipment customizations to use, and how to deal with the assorted, strange items until the game becomes manageable. Baroque is never easy; mastering the intricacies of the battle system and item use adds a fun, strategic aspect to the game, and every bit of the player’s wit and skill will be necessary to advance the story. Save files can be created between floors in the Neuro Tower, which grows in size after important cut scenes, and as the dungeon becomes larger it develops increasing ways for the protagonist to keep items between deaths. 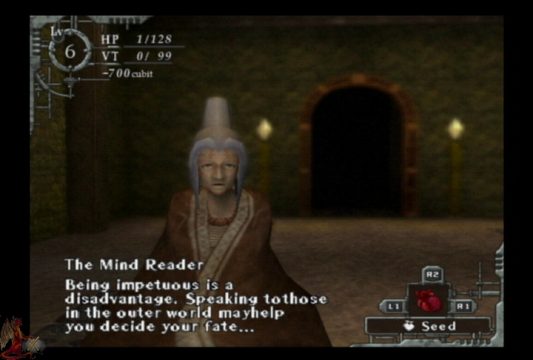 NPCs give advice. Like telling you to talk to NPCs.

Story advancement takes place when certain conditions are met and create the only lasting effects between Neuro Tower trips. After the Blaze, each human in the world was forced to hold on to a twisted fantasy, called a baroque, to survive. Having lost their minds, hearts, humanity, or all three, the once-human abominations are all that live in the world now. “Monsters” in the game are people who completely succumbed to their baroques and became Meta-Beings. People who held on to part of their humanity are called distorted ones and serve as NPCs. Advancing the story often involves interacting with the NPCs to cause a permanent change in the world. There are vague hints as to how exactly this is done. The player must figure out how to move the plot forward and ultimately complete the game.

The sci-fi setting begets an interesting and nightmarish plot. Major story advances produce cut scenes as positive reinforcement. These sequences eventually explain the key character and story elements, although they are fleshed out through NPC interactions. Most of the game’s narrative is conveyed by NPCs, but since NPCs are all warped in some way it usually sounds like nonsensical crazy talk. In a way, the player will only get out of the story what he puts into it. Only by regularly conversing with NPCs does everything come together to form a coherent, if not exactly cheerful, story.

All dialogue in the game is voiced, from the Archangel down to the creepy Littles whose pleas to be killed echo throughout the Neuro Tower. Because everyone is distorted, the voice acting is usually deadpanned or overly emotional in an intentional and good way. Pain and the lack thereof are important plot themes. Characters are typically either in constant agony or incapable of feeling pain and their voices reflect this. The background score adds to the ambiance and touches upon metallic, cyberpunk, and choral styles of music. It works well while dungeon crawling, but the soundtrack CD would not be a top seller. Enemies emit distinguishing sounds ranging from throaty gurgles to hair raising shrieks to heavy clanking. Meta-Beings can be heard approaching from a decent distance away. Their ominous noises combine well with the music to augment an already disturbing setting. 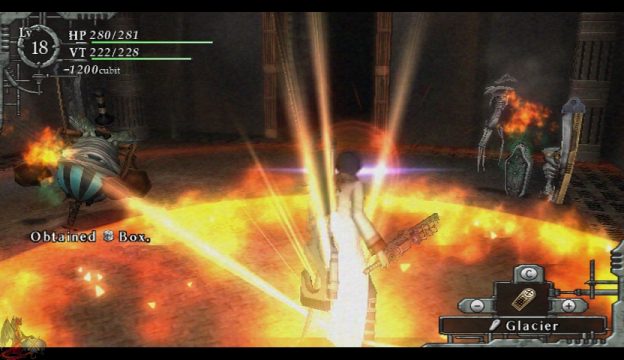 Charring denizens of the Neuro Tower.

The grotesque art style of Baroque adds to the setting even more than the sound and stands far apart from the JRPG standard. Meta-Beings are twisted amalgamations of flesh and metal. Limbs are rearranged, bodies are disproportionate, and heads are in the incorrect location. The character designs look like Salvador Dali painting Charles Manson’s nightmares. Even the less physically altered NPCs are unsettling to gaze upon. The Meta-Beings are well animated and have a sick sort of charm. Floating, giant-headed marionettes squeal with glee while detonating themselves in a suicidal attempt to kill the protagonist. Fleshy motorcycles which attack by clashing cymbals will use their extra arms to cover their ears just as the cymbals hit each other.

From a technical standpoint, the game looks like a midlife PS2 title with its rough edges and simple textures. There is a static filter with black visual noise on the screen at all times. This adds to the surreal setting, but at a time when games are expected to be vivid and beautiful, it makes the visuals muddy and blurred. The monochromatic nature of the game has the same effect; it makes the world more dreamlike but less visually impressive by an objective definition.

Those who require palette swapping and an eternally increasing level to acknowledge progress between dungeon excursions will likely find other faults in Baroque. Define audio by how catchy or memorable the score is, graphics by texture density and anti-aliasing, story by clarity and linearity, enemies by how huggable they appear, and battle systems by depth and complexity, and Baroque is definitely a total failure of a game. For these people, a new Final Fantasy remake is surely on the horizon. For everyone who wants a new, different, and challenging experience, and, of course, all fans of rogue-likes, this is an excellent and rare opportunity to try an underrepresented and addicting genre.