AWAY from this Game Is the Best Place to Be

When the formation of Mistwalker was heralded as the beginning of a new company that would compete with Square Enix and oversee the development of top-tier, outstanding, traditional JRPGs, it was with games like Blue Dragon and Lost Odyssey in mind. Love them or hate them, they were unsurprising Xbox 360 JRPGs from the man who invented Final Fantasy. AWAY: Shuffle Dungeon, then, is the opposite of what was anticipated, being a repetitive series of dozens of tiny dungeons featuring an action-based battle system with rough controls, relying on a single, overused gimmick to drive the player through twenty hours of rote monster-slashing, and tying everything together with an unnecessary and ridiculous sci-fi story.

Hardly qualifying as an RPG, AWAY‘s battle system resembles a stripped-down version of Zelda. Metroid and Castle Crashers, neither of which are considered RPGs, have more growth and gameplay options than AWAY does. The protagonist, Sword, fights his way through the top-down view, 2D dungeons using a basic melee attack and an awkward spell system. Various monsters, traps, and walls impede him in his attempt to find the stairs to the next level. The floors themselves are small and cramped, each fitting on the DS’s two screens in its entirety without scrolling. The viewpoint is tight compared to games like Izuna or Lunar Knights, both of which scroll as the player walks around, so there is not much room for the dungeons to be interesting or varied.

The game’s one hook and only attempt at innovation is the shuffle mechanic. Sword can move seamlessly between the top and bottom screens. One of the screens will have a countdown timer on it. When it hits zero, the dungeon floor on that screen will spin away and be replaced by a different floor layout with new enemies and treasure. If Sword happens to be standing on the DS screen that changes, he will be tossed off the level, lose some health, lose all of his magic spells for that series of floors, and must restart the current floor from its opening, pre-shuffled state. This potentially creates a hectic, speed-run feel to the game. In addition to slicing foes, hitting switches, and staying alive, the player must constantly be aware of the fairly small timer and do everything possible not to be on the wrong screen when it changes. Eventually, a dungeon segment with stairs to the next level appears in a shuffle, and progress is made by continuing down until the bottom level is reached. Dungeons are small, only having between one and five such levels.

In implementation, though, the shuffle mechanic is not handled well or creatively. To change things up, the timer acts differently depending on the type of dungeon. Sometimes the countdown will not start until Sword steps from one screen to another, sometimes it will run immediately following a shuffle, and other times it will start only after Sword presses on a special type of floor tile. The problem here is that when the timer is not running, the dungeon-crawling loses its frantic feel and devolves into a slow-paced, very below average experience. Unfortunately, the best strategy for staying alive is to keep the timer from counting down for as long as possible in situations where the player controls when it starts. 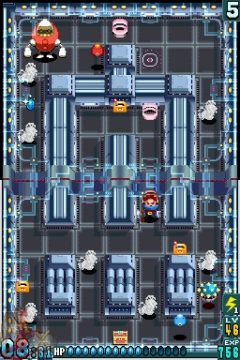 Lots of traps, enemies, switc– OH NO THE FLOOR IS ABOUT TO SHUFFLE AWAY!

Due to the limited size of the floors, dungeons all begin to feel alike even though the designs are predetermined and not randomized. Because every floor of every dungeon has four paths between the screens, the layouts quickly seem recycled. Shuffled away layouts eventually return with slain monsters still dead and missed treasure chests waiting to be opened. This encourages the player to take his time; there is no need to risk being thrown off the floor to reach for a chest when it will return in a minute or two. Again, this undermines the hasty shuffle mechanic. By the end of the game, the tight spaces are packed with deadly, obstructive foes and devious traps with an emphasis on repeated trial and error to succeed. These attempts at adding challenge instead add frustration. There is no penalty for dying, and a triumphant dungeon run only takes a couple of minutes, so the player never feels forced to take difficult areas seriously.

A unique, but overdone, gimmick can take a solid dungeon hack and make it memorable, but the basic mechanics in AWAY: Shuffle Dungeon are poor. Sword can either attack with a solitary swing of his weapon, or keep attacking to turn it into a short combo. Combos lock Sword into a motion that is too long for the fast pace of the game, making him step forward and leaving him open to attack. Enemies have the ability to teleport away after taking damage, so if a single stab is used, more than likely the enemy will vanish without dying just to reappear nearby a couple of seconds later. The teleporting animation and the death animation for monsters is nearly identical, and in the heat of battle it can be difficult to know if the foe is slain or not. Teleporting foes have the cheap habit of resurfacing on top of Sword, making them hard to see and letting them get in a free attack. When Sword is hit, he does not benefit from a period of invulnerability. This causes death to occur quickly and unexpectedly in dire situations. Hit detection in general is spotty for Sword, but generous to foes.

A train of up to six sentient, color-coded blobs, called fupong, follows Sword around the dungeons, enabling him to cast four different magic spells depending upon which blob is following immediately behind him. Their order is shifted awkwardly by pressing the L and R buttons, although they cannot be shifted or utilized while Sword is getting hit or locked into a combo attack. Therefore, if a spell is needed immediately, the player must wait for Sword to stop attacking or recover from being struck, press L or R until the correct fupong is next in line — which is hard to see since they tend to cover each other on the screen — and then press the magic-casting button. When Sword is tearing across a level at full tilt, the fupong train spreads out and loosely follows. Unfortunately, they can get caught in shuffles too, and losing one in a shuffle disables its magic ability for the rest of that level. Worse, though, is that if a trap or shifting door hits a fupong, it will separate from Sword and be lost forever unless he retraces his steps and snags it back. Fupong can be found in dungeons and combined to create better fupong with amplified magic spells. Creating high level fupong, though, takes combining scores of basic ones, and losing a high level fupong to a trap is the best reason to reset the game and restart a dungeon. 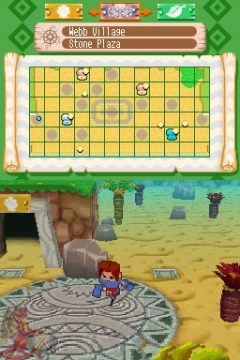 Running in circles to find the next plot point.

The story starts out in a reasonable sci-fi manner. In a quaint, rural town, a villager disappears without a trace once a year. The phenomenon is called AWAY. While sitting in a field with his would-be fiancé, Sword is lifted into the air by a bright light. When his girl interferes, something goes wrong and every person except for Sword vanishes. Sword spends the game making dungeons appear, delving into them, and rescuing the person at the bottom. Chaperoning people out of the dungeons adds a gameplay mechanic; escorted villagers follow Sword with the fupong, and if he or she gets shuffled off a floor, Sword must return to the bottom level and retrieve him again. The plot, sadly, is weak and prevalent. It leaps off the sci-fi deep end and builds up to an unnecessarily bizarre final chapter. If Izuna 2 is an example of wedging a fun, nonessential plot into a hack-and-slash, AWAY is an example of forcing a time-wasting, unwanted plot into one.

The presentation as a whole is as unfortunate as the plot and interface. The graphics in town are typical, ugly DS 3D with an almost appalling, childish aesthetic. The dungeons are drawn in passable, unnoteworthy 2D. There is a surprising quantity of compressed, rapidly-spoken voice acting that provokes an “I’m laughing at you, not with you” reaction with its awfulness. The rest of the music and sound effects are functional and forgettable. AWAY provides a false semblance of customizability that has no drastic impact on the gameplay. Sword can equip four types of weapons, but none of them feel right. The fast-and-weak daggers have an almost unusable combo attack due to how long it lasts and how far it moves Sword forward. The strong-and-slow axe has a delay between when the button is pressed and when Sword finally swings, which ruins the need for responsive input. The two weapons in the middle are better, but not much. The player can choose where the town’s shops are rebuilt based off vague clues about how location affects selection and growth; however, this has next to no impact on the dungeon-crawling. Sword has character levels, but they are gained slowly and have such a minimal effect on his statistics that it is a wonder why they were included at all.

Ultimately, the stilted controls, enormous number of brief, similar dungeons, tiresome shuffle gimmick, and overly simple gameplay make AWAY: Shuffle Dungeon a very subpar game. It’s boring, repetitive, way too long, and frustrating in the wrong ways. At its best when the action is fast and frantic, it plays like a puzzle game at times, but the setup is akin to Tetris forcing the player to clear forty hectic stages, each only lasting two minutes with lengthy plot sequences in-between. When the action is slower, AWAY is just another poor dungeon-crawler that would be more fitting as a free flash game on the internet, or a lazy XBLA game costing $10. With so many better options on the DS, like Rocket Slime, Lunar Knights, and the Castlevanias, one would be advised to satisfy a 2D action game craving elsewhere. Either that, or wait until it drops to a price point more aligned with the small amount of creative effort put into it by the developers.