Avernum: Escape from the Pit Review

It’s Not Paradise, but It’ll Do

Way back in 1995, Spiderweb Software released its first game, a downloadable RPG called Exile: Escape From the Pit. I played the free demo for that game back then and enjoyed it, but never got a chance to play through the full game. Recently, Spiderweb Software released a second remake of that humble game, Avernum: Escape From the Pit, and that seemed like a good a time as any for me to finally play through it. Thus, I find myself cast out from the evil empire that rules the entire surface world and am thrown through a magic portal into Avernum, the labyrinthine system of inhospitable caves inhabited only by convicts and monsters.

Avernum was clearly created on a very small budget, and nowhere is that more clear than with its graphics and sound. The game uses fairly simple sprite graphics, very little music, and some art and sound effects are reused enough that they become a bit repetitive. It also suffers from consistency issues since player character images, NPC portraits, menu illustrations, and large splash images all have very different art styles. It also can be a bit hard to spot small items lying on the ground, but other than that the graphics are perfectly functional for gameplay and don’t get in the way.

It may not be very pretty, but there is still a lot to like in this game, and one of the best things about it is the setting. The vast subterranean prison of Avernum is inhabited by outcasts from the surface world who must all struggle to survive the same terrifying dangers after being cast into that forsaken abyss. The many characters you can interact with span a diverse range of stories, motivations, opinions, and personalities, and the countless tales they tell about their world help give it impressive life and depth. It really is one of the most interesting settings you’ll ever find in a game, though it is held back by its reliance on clichés like all-powerful tower-dwelling wizards and evil super-empires. The game’s good sense of humor also helps keep it entertaining.

Unlike many modern RPGs, Avernum doesn’t focus on major plot choices or character development. Instead, it is a game about exploration. The caves of Avernum are expansive, and every nook and cranny is full of danger and treasure. The game has three major quests to complete, but almost every aspect of these quests is completely non-linear. It is quite easy to find some trinket you’ll need long before you even find the quest that calls for the item, which makes random exploration very rewarding and helps negate a lot of potential frustration. 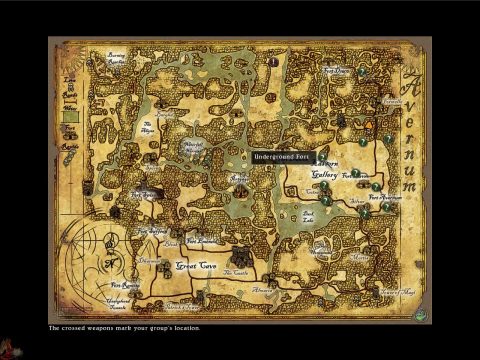 Prepare to explore every inch of these caves.

As far as combat and character advancement go, Avernum doesn’t do too much out of the ordinary. Players create a party of four characters and put points into their stats and skills when they level up. The game doesn’t use a class system of any kind. Instead, it has a few trees of melee combat, ranged combat, and magical skills, so players are free to make anything from generic warriors and wizards to crazy hybrids like dual-wielding ninja mages. Battle takes place on the same grid as dungeon exploration, and characters have a mix of spells, special physical attacks, and consumables at their disposal. Combat is completley turn-based, with each character having a number of Action Points that are spent by moving or performing actions. It isn’t anything stellar and it leaves some room to create a gimped party, but combat is still quite fun and a flawed party can easily be corrected by the game’s generous character editor.

For the most part, the game’s interface works just fine. The game is primarily controlled with the mouse, though there are a number of keyboard shortcuts as well. Moving, talking, or attacking are as simple as clicking where you want to go or what you want to interact with. A major issue, though, is that “clicking on what you want to interact with” is not as simple as it sounds when sprites overlap. There is often a frustrating difference between what you mean to click on and what the game thinks you clicked on, which makes targeting specific enemies or properly positioning a wide-area spell more difficult than it should be. This can be very annoying, especially when the game treats a very short creature as if it were as tall as a giant. Fortunately, this only happens when characters are arranged in a vertical line, or when the player wants to move or target the space directly above a character. 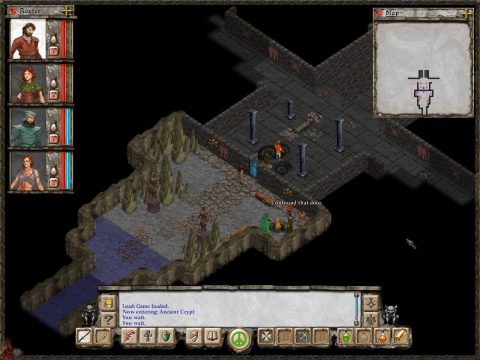 The game’s balance can be rather peculiar at times. For the most part, it provides an excellent level of challenge, assuming the party is at the appropriate level for a fight. In such cases, fights are fun without being either punishingly hard or disappointingly easy. Many encounters against major foes have a variety of tricks or gimmicks to them in order to spice things up. A major problem, though, is that it can be hard to find enemies who are of the appropriate level for the party to fight, especially early on. There are far more mid-to-high level enemies than low-level enemies in the game, so players will stumble into unwinnable battles quite often. This issue is aggravated a bit by the strange design of many dungeons, in which a player may be able to easily dispatch the enemies in the early part of a dungeon and yet find the bosses of the dungeon to be nearly impossible foes. This balance improves significantly by the second half of the game, but it can be frustratingly slow progress until then unless players know the best route beforehand.

I nearly gave up on the game halfway through because I was stuck in a situation where it felt like everything left for me to do was above my level. I’m glad I found my way past that point, though, since the second half was very enjoyable. It is easy to lose your way in the caves of Avernum, but at the same time those caves are great places to wander aimlessly and just have fun seeing the sights and meeting the locals. For anyone who enjoys that kind of experience, I’d happily recommend Avernum.