Over the last few years or so I’ve come to realize how bored I am of the constant “epic” atmosphere that the majority of RPGs tend to attempt constantly. What I’ve slowly learned about myself as an RPGamer is the satisfaction that comes from a million little successes. Sometimes it’s good to take a break from the RPGs that are epic in scope, and stop to appreciate the simple things. When I played Atelier Rorona last year, it gave me everything I was looking for: a protagonist with whom I could identify and a story that wasn’t made of the same reused tropes. With Atelier Totori: The Adventurer of Arland, we are given a girl who goes through the harsh realities of adolescence, and her journey is one worth taking.

Five years after Rorona’s adventures in Arland, players are introduced to thirteen-year-old Totooria “Totori” Helmold, an alchemist-in-training with a strong desire to become a first-rate adventurer like her mother, Gisela. On one of her many journeys, Gisela goes missing, and while the residents of Alanya have given up all hope, Totori believes that she’s still alive. While training under the Republic of Arland’s great alchemist Rorolina Frixell, Totori realizes that searching for her mother requires an adventurer’s license from the government, thus beginning Totori’s adventure.

One of the Atelier series’ greatest strengths is its light-hearted storylines. There’s no apocalypse that must be faced or demons that must be vanquished. The games instead provide stories about pure emotion and the power of the human spirit, Totori, while much shyer and more reserved than Rorona, is a wonderful heroine to follow about. Players get to watch Totori’s growth and get to see her spirit shine through all the obstacles that she faces. Her supporting cast adds a lot of colour to the picturesque world of Arland. From newcomers like Marc, the whacky and obnoxious inventor, to returning cast members such as the solemn ex-knight Sterkenberg, Totori’s world never seems dull. With NIS America’s fabulous and touching localization, it’s not hard to fall in love with the ensemble cast. Totori’s close personal ties to the story make it an involving and meaningful experience that is well worth experiencing.

Unlike in many RPGs, Totori’s story is also a much more open experience. Instead of imposing specific deadlines or adhering to a strict plot, Totori’s objective is upgrading her adventurer’s license, which can be done via a variety of tasks. These jobs include synthesizing items, traveling to far locations, finding all the gathering points within an area, defeating bosses, and making specific items from recipes. This deep, expansive system provides a large variety of ways to tackle the gameplay and allows the player more freedom to experiment in terms of what acquires more points for progression. This change is welcomed, as it gives an opportunity to explore the game’s world and craft as much as desired. Totori can also take on requests from the citizens of Arland and Alanya to craft items, punish enemies, and gather materials while earning a nice profit. Its open nature and lack of artificial goals or impositions make Totori a less hectic experience than one might expect. This slowdown in pace makes for a smooth experience that is difficult to put down, allowing players to plot how they wish to spend their time, giving it that “just one more day” feel. 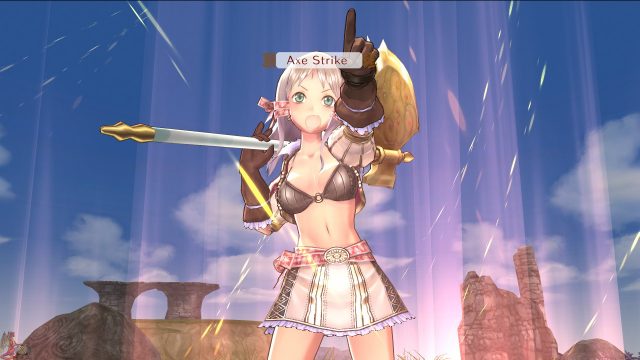 Melvie is going to PUMP YOU UP!

One aspect that Atelier Totori has scaled back is gathering areas, meaning there is less territory to explore. In exchange, Gust opted to give considerably more gathering points in total to discover, which makes for a fair trade-off. Throughout the game time gradually passes while players are gathering items or fighting enemies. This means that whole days are not lost in one fell swoop, but even Totori‘s more lenient structure with regard to time passage could be a little perturbing if one gets wholly absorbed in all the game has to offer. Events happen naturally thanks to the merciful time mechanic, but it can still be easy to miss character events necessary for specific endings. While not necessarily a bad thing due to the proliferation of events throughout the game, going for a specific ending can make juggling everything rather complex.

With regard to the alchemy system, Totori stays very close to its predecessors. The game sports the same easy-to-use synthesis system that players saw in Rorona, complete with the same addictive qualities. Totori can make as many items as her MP allows, after which she might need a nap to refresh. Each item gathered and synthesized has a quality ranking from one to one hundred, and better quality items are more desirable for use in battle and fulfilling requests. Once an item is crafted from a recipe, the player can bestow traits based off of a point value that will add to the overall quality of the item, providing bonuses in combat. Items created with lower quality ingredients will do less damage in battle as the game goes on, so it’s important to constantly upgrade materials to enable the most worthy items be used in battle. These changes are welcome as it emphasizes experimentation, giving players that desire to constantly create and improve upon items as many times as they can.

While combat isn’t usually a prime focus in the Atelier series, it does take a great precedence in Totori as it is a means of earning points towards the adventurer’s license. With a tried-and-true, turn-based battle system, each character has his or her own pool of MP to draw upon, which is an improvement over the HP-draining skills of Rorona. Totori and Rorona are the only characters who have the option to use items in battle, so it’s vital to be well-stocked before heading out on an adventure. It improves on Rorona, but only enough to get the job done with no frills. 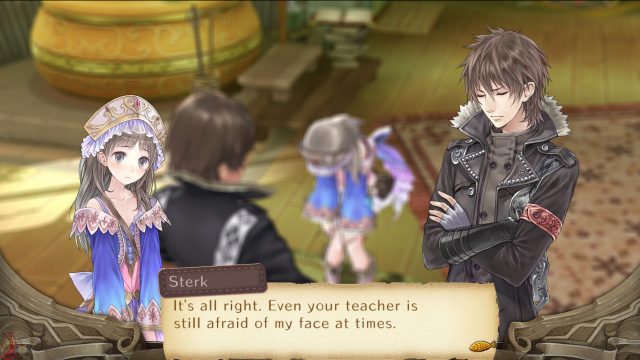 How could anyone be afraid of that sweet, sweet face?

Once again Gust has showed great prowess in the audio and visual departments, with the small caveat of a few graphical assets being recycled. Totori’s graphics are absolutely stunning, and the amount of detail has been refined since the last entry. The character models look great in 3D, with each gathering point appearing vibrant and lifelike. The world of Arland is very pastoral, and manages to be breathtaking in specific areas. Gust has crafted another strong score for the audio component, with some themes from Rorona further cementing the ties between the games. Most of the original tracks stand out, but the gorgeous main theme is the true standout hit.

Totori suffers slightly in the voice acting department. Some of the characters sound perfect for the roles that they play, while other voices sound like nails on a chalkboard. Fortunately Totori’s voice stands out as one of the better performances, successfully capturing the sweetly shy quality of the protagonist. For those who aren’t a fan of English voice acting, there is an option to switch to the Japanese voice track.

Atelier Totori is not an epic RPG like many other games in the genre try to be, but its allure allows it to stand tall as a bittersweet and emotionally charged experience that may require gamers to pull out the tissue box. Totori’s journey is one from innocence to experience, both in terms of how the story works and how players help her grow to become an alchemist. At the same time, events in the final act of the story pack a greater punch because of the contrast between serious and playful elements. The gameplay continues its solid trend, and Totori shows constant refinement to the tried-and-true Atelier formula. NIS America and Gust have given RPGamers a fantastic game with a great localization and an impeccable way to combine aspects of the simulation and JRPG genre as well as time management mechanics that pull you in and don’t let go. Furthermore, Totori outdoes its predecessor in nearly every aspect, showing that Gust is always trying to one-up itself with each new release. Atelier Totori shines for its honesty, and has a lighthearted feel that the majority of RPGs don’t match.