Atelier Sophie: The Alchemist of the Mysterious Book PS4 Review

The Execution of All Things

It’s hard to believe that we have reached the seventeenth entry in the long-running Atelier series. Even harder to believe are the various transformations that this series has undergone over the years. With Atelier Sophie: Alchemist of the Mysterious Book we see a new shake-up of the series’ formula. Gone are strict deadlines of previous games in the series to more vague challenges. However, do the positives outweigh the negatives with this recent instalment?

Similar to previous instalments, Atelier Sophie stars a young heroine who has taken over her grandmother’s atelier and has a strong desire to use alchemy to help people in her small town. One day while practicing her craft, she stumbles upon a reference book that comes to life. It turns out the book was once a human named Plachta, who was an all-powerful alchemist. With no mentor to help with her alchemy training, Sophie sets the goal of helping Plachta regain her memories, in the hopes of helping her become human again.

There’s a very sweet and strong tale of friendship woven into Atelier Sophie, and one which needs to be commended. A lot of the core parts of the story focus on Sophie’s friendships with people in town and how she wants to be depended on. From helping townspeople with their problems, to simply hanging out and learning their true tale, friendship is a large theme in Atelier Sophie that is constantly being explored in the character narratives. The relationship between Sophie and Plachta is also beautifully written, and it does a great job of tugging at the heartstrings. However, outside of the main plot, the rest of the story does leave a lot to be desired. Part of the issue is that the other storylines present are fairly forgettable, and some of the localization choices for how certain characters are portrayed are somewhat problematic. In particular, there is the case of Oscar, a portly young man who prefers plants to people, but who seems destined to be the butt of every fat joke in the game. The story’s problems stem a lot from pacing, which is a larger issue within Atelier Sophie.

To put it bluntly, the pacing in Atelier Sophie is an utter mess. While the game uses a weekday calendar, many events only happen on the weekends, and while it’s easy to trigger the majority of the character events, the same cannot be said with the main storyline. In a lot of cases the directions for how to progress the plot can often be vague or outright unclear. Sometimes players can go for days without an event as well, creating a lull, and other days there are a flurry of events and tasks to complete. There’s no ebb and flow to the pacing, and it would have been better if the series had kept the directness of the previous titles to ensure that players know how or what the goals are that need to be achieved. 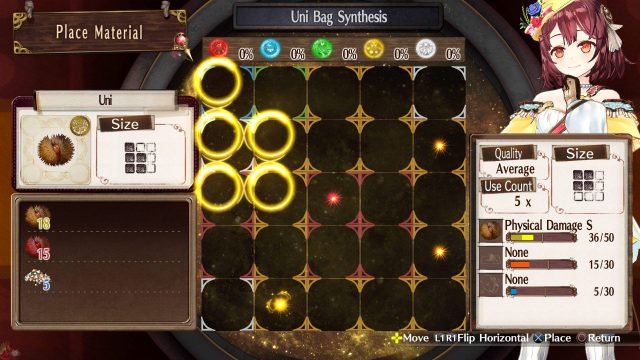 Sophie also has done away with time limits, much like its predecessor Shallie, and this too is for the better. While the pacing issues are a problem, at least players do not have to worry about having a deadline over their heads. In fact, Sophie is pretty generous about time, opting for a five-day work week where players are encouraged to spend time with the townspeople on weekends to boost the townspeople’s friendship ratings. If folks like Sophie enough, they will even reward her with gifts often containing better quality or rare items.

This extends into how recipes are acquired as well. In previous titles, recipes could be purchased or were provided to the player, but this has been done away with in Atelier Sophie in favour of having players explore and experiment to create new recipes. For the most part, it is fairly easy to create a new recipe by checking the notes within the reference book, but there are some cases where not enough information is granted, leaving the players scratching their heads over what the memo is even attempting to describe. Gust should be applauded for encouraging experimentation this way, but for newcomers, a bit more directness would have made this system really shine.

Synthesis experimentation has always been a large part of the Atelier series, and Sophie excels in this area big-time. The overhaul to the synthesis system is one of the newest features, and it’s easily one of the more interesting parts of the game. Players can now select what kind of cauldron they wish to use, and each cauldron has a Tetris-like grid, wherein players can place the different ingredients that they are choosing to synthesize with. This system adds a puzzle element, as the best quality often comes from pieces not touching each other, along with them also being color-coded to specific spots on the grid. Not only is this engaging but it provides so much more movement and flexibility to how items can be crafted. It’s easily one of the highlights of the game, and something that will hopefully be refined even further in new instalments.

A downgrade in quality, however, comes from Sophie‘s battle system, which is quite the low point in the series. While games like Shallie and Escha & Logy were very hands-on, Sophie opts to be nearly hands-off. Players first select a battle stance, either offensive or defensive, then select a move that they wish to use. If two or more characters are in the same stance, they will provide support in the form of an extra attack or a guard. However, unlike its predecessors, players have no control over who will use the support moves, as the selection is automatic. Chaining attacks and guard are also done automatically, and once the guage hits 300% a super attack or guard can be unleashed, except the player has no control over which character will use the super move. This gauge is filled when characters attack, use items, or special skills. Having come off from previous titles, this hands-off approach is an outright turn off, and it makes for boring and unengaging battles. The one positive is that all characters in the party can now use items and this is no longer limited to alchemist characters. 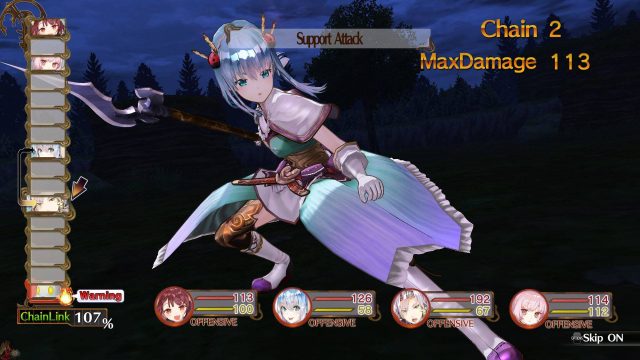 Leon is always ready to lend a helping hand.

On top of that, the difficultly is also a mixed bag. There are many cases where players can walk into areas, feeling like they are prepared to fight enemies, only to get completely wiped out. Since the development of new arms and armor is a gradual process in Atelier Sophie, players will have to rely on crafting better items. It doesn’t help that the ability system isn’t introduced until characters reach level twenty, which happens to be the Adventuring Level cap in this game. Thankfully, the abilities provide concrete stat boosts and can upgrade special abilities as well. All this does is make character advancement beyond the level cap a boring and tedious affair, as it forces the player to farm for ability points from a late point in the game.

There are other positives in Sophie, however. For one thing, it sports beautiful graphics on the PlayStation 4, and a lot of the environments are far more varied and unique compared to previous Atelier games. The areas are thoughtfully designed, offering large amounts of colour that draw the player into wanting to explore and gather ingredients further. There’s a much more whimsical approach to the game’s soundtrack as well, which offers a larger variety of vocalized songs and instrumental music. From harder rock to softer melodic tunes, there’s so much more to Sophie‘s soundtrack than what is initially offered. The only negative towards the sound does come from a much uninspired performance by the English voice cast, making the Japanese voice track the way to go.

I wanted to love and adore the heck out of Atelier Sophie, but for all its positives, there were a ton of negatives well. I always love when series attempt to overhaul themselves, but there are certainly decisions in Atelier Sophie that I personally was not fond of at all, especially as a series veteran. Overall, I think there is definitely some promise in some of these newer systems, but in its current state, it makes Sophie tough to recommend. Overall, Atelier Sophie is a mixed bag with many ideas that will hopefully be refined in future instalments of the Mysterious series.