Atelier Rorona Plus: The Alchemist of Arland Review

Now with the Trait “Very Easy”

Although Atelier Totori and Atelier Meruru received updated remasters before their chronological predecessor, it was Atelier Rorona, the first of the PS3 Atelier games, which actually required such an update. As the most difficult, convoluted, directionless, and unforgiving PS3 entry in the series, it has long presented an awkward obstacle to those who want to fully enjoy the setting and characters in the later, more approachable games in the trilogy. Atelier Rorona Plus: The Alchemist of Arland is finally available, and those waiting for an easy entry to the Arland trilogy will have their wishes granted by how it changes one key combat mechanic. Those who already completed the original release, however, will gain little from buying the game a second time.

Rorona, a clumsy teenager with either a general learning disability, a severely sheltered childhood, or both, has been working as an apprentice in Arland’s atelier for years. It would seem she spent those years fending off her master’s unceasing sexual advances rather than learning alchemy, though, and the game’s opening events see the shop thrust unwillingly under her knowledgeless control. The kingdom of Arland will close the shop unless Rorona can complete the alchemical tasks assigned to her every three months for three years. From the start, Atelier Rorona plays like a sandbox game where the player can do whatever she wants so long as the kingdom’s tasks are finished on time. There’s no world to save or prince to wed; the story revolves around Rorona, the people she meets, and her drive to save the atelier.

This gives Rorona a unique method of delivering its character interactions and developing its storylines. Technically, almost all of the dialogue in the game is optional, and the player only sees scenes as various unknown flags are triggered. Sometimes crafting a new item triggers a scene. Some scenes occur after specific dates on the calendar. Many scenes with party members are based on their friendship level, although many are also triggered by taking them into the field, or traveling to a specific place, or even by which combinations of friends are brought out of Arland together. Some storylines follow a long, set sequence while others can occur at any time. Because such a wide and complex variety of actions can trigger events, they occur frequently and consistently. Later Atelier games oversimplified this, resulting in an inundation of cutscenes at the start of a new assignment period followed by a strange silence for months. The steady pace of events in Rorona is still the best of the PS3 Ateliers and a cool storytelling method in a form of entertainment that’s typically rigid.

Gameplay in this sandbox is driven by a long list of assignments and requests. Every three months Rorona receives a single mandatory assignment along with over a dozen optional assignments. Mandatory assignments involve turning in items to fill up a star gauge. The gauge fills faster when better items are given, and it’s up to the player to decide if she’d rather turn in a large count of low quality items or fewer high quality ones to complete it. The threshold for success is very low — only three stars when the gauge goes up to ten. Optional assignments run the gamut of everything Rorona can do in the game, and often give the player an idea of what sorts of things Rorona should be capable of accomplishing by the end of the assignment period. Optional assignments suggest useful items to craft, field locations to explore, and a few difficult tasks related to adventuring or alchemy. Completing optional assignments grants stamps on a three-by-three grid, and meaningful rewards are given each time three in a row are earned. Rounding this out are optional requests from townsfolk and friends to give them items or slay monsters. Completing these grants money, higher friendship levels, and other rewards. 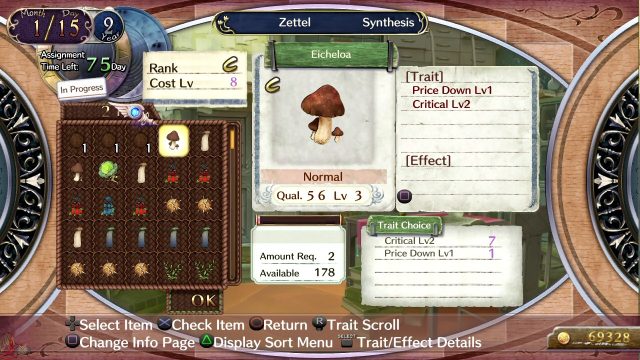 Crafting is fun, but would have benefited from improvements.

Completing these goals requires Rorona to craft items with the alchemy system. Gust opted not to significantly alter this system in the Plus version despite the conveniences introduced in later Atelier games. Crafting an item is done by selecting a recipe and then choosing which specific items to use for each ingredient. Unfortunately, each type of item does not have its quality or traits fixed. If there are thirty magic grasses in the container, then each time one is needed the player must look through the thirty individual choices and pick one. If a recipe can use any type of plant, and Rorona has six, then this task multiplies to skimming over a hundred options for one ingredient in a recipe that might have four ingredients. There’s also a hidden quality metric that affects the abilities of some items in ways which can only be seen by highlighting them during the selection process. This was one place an improvement would have been welcome, but all we got was a more aesthetically pleasing interface to look at.

To obtain base materials, Rorona must travel outside of Arland to tear them from gathering spots and slaughtered monsters. Each dungeon is composed of many small regions, and days pass when Rorona moves between them or exits them; time doesn’t pass in combat or when gathering. The battle system is a simple and straightforward, but very well polished, turn-based one. The three party members and their foes have their turn order clearly displayed. Each party member can attack or use a skill, while Rorona is also able to use alchemical items. Two gauges fill as party members attack. One allows them to either jump in during an enemy’s attack to guard Rorona or follow up on Rorona’s attack to start a combo. The other fills much more slowly and is used for an ultimate attack, although only fights against optional endgame monsters will be long enough to see its use. A major change in the Plus version, and the only change with a massive impact on the gameplay, comes in the welcome addition of MP. In the original Rorona, using skills depleted HP. By adding MP, health management is no longer an issue, and the player is not forced into a war of attrition between skill use and long-term survival. It might sound small on paper, but this change affects many of Rorona‘s other systems originally balanced without it.

Because restoring HP was so important in the original version of Rorona, the practical need for better healing and attack items drove the game forward. Now that HP isn’t depleted by skills and combat is easy, this drive is no longer there. Alchemy’s practical uses are limited and there’s no need to improve upon previously crafted items once they are logged in shops. Without this drive, the somewhat burdensome nature of the alchemy system becomes completely unnecessary, although some will see the reduced emphasis on crafting as a good thing since it wasn’t improved in this release. Worse, though, is the impact on story events. A long, hilarious sequence of cutscenes centered on Rorona using alchemy to create food was one of my favorites in Rorona, but the events are triggered by crafting high quality items. Since this is unnecessary, I missed the entire event sequence in Rorona Plus. Similarly, the blacksmith has several humorous cutscenes that only occur when he creates new equipment, but between the difficulty reduction and weapon and armor rewards from optional assignments in Plus, they’re less likely to be seen by players. 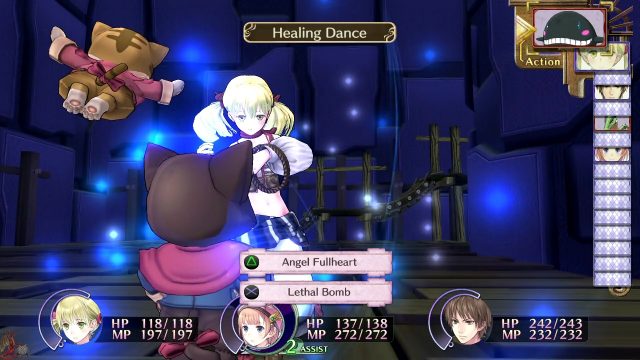 Also no longer useful? Liona and her healing dances.

Other changes in Rorona Plus are similarly hit and miss, mostly focusing on updates that are welcome but not the most needed. Menu layouts and designs are clearer and more visually pleasing, but no useful updates were made to the information displayed or the controls. The character models received a much-needed fix and no longer look like disturbing fetal-adult abominations, but the rest of the game’s graphics are textureless and flat, such as the opening dungeon depicting a field as a homogeneous blob that fills the screen. The whole look is less cell-shaded and more budget-monochrome, and objects in the 3D world are made of right angles and straight lines. Esty and Astrid can now be brought along in combat, each adding something unique to battle as a positive. Rorona Plus fixes the mess of Rorona‘s endings. Party member endings are no longer tied to the Normal, Good, or True ending, and the player can select which ending she wants to see from a list of the ones earned in the playthrough. Once the game is finished, a new, fourth year is added in Plus featuring an appropriately absurd plot where Meruru and Totori travel back in time and visit Rorona. The fourth year has no assignments and adds three new extremely difficult dungeons, new alchemy recipes, and the ability to bring Meruru and Totori into battle. There isn’t much to the added story and the main draw of the fourth year is the hard dungeons and impossible, optional bosses at the end of them.

If the original Atelier Rorona‘s major drawbacks and barriers to entry were its difficulty and time-consuming crafting, then Rorona Plus fixed one and made the other less relevant. Adding MP turns the entire game into a cakewalk by reducing dungeon trips and freeing up time previously spent optimizing battle items. For a self-imposed challenge, it would still be tricky to ten-star every mandatory assignment and complete all of the optional ones in each period, but someone playing it as a breezy, silly sandbox game can have a good time here without any challenge. Everything that made Atelier Rorona great is still intact, including the fun localization and gameplay freedom. The changes take almost nothing away while adding pointers to make it less directionless and polishing the battle system until it’s as smooth as the landscape’s textures. I personally wish the simulation mechanics had received more attention, especially in redoing some event triggers and in the alchemy interface, but they still work fine where they were left alone. The new audience here is those who were turned off by Rorona‘s rough edges, and that audience should give Plus a try. Those who were enthused by the original can pass on this unless one new Atelier game per year just isn’t enough Atelier.