Atelier Meruru Plus: The Apprentice of Arland Review

We Should Become More Adventurous

It’s hard to write a review for a game you’ve tackled once before. Often the biggest question one has to ask is this: is there enough new content to warrant a rerelease? With Atelier Meruru Plus: The Alchemist of Arland, I found myself really struggling to define what the “Plus” aspects truly were, because if you’ve played the PlayStation 3 version, then it’s exactly the same game you’ve played before slapped on a new platform. For those new to the series and looking to play it on the Vita, however, this is a great place to start.

Assuming the role of Princess Meruru, players embark on a journey of perseverance and positivity. Meruru has fallen in love with the power of alchemy and wishes to use it to help develop the nation of Arls and see her kingdom grow and prosper. When alchemy becomes too much of a distraction from her royal duties, Meruru is summoned by her father to give up her newfound passion and accept the possibility of Arls merging with Arland to become an even larger kingdom. Meruru is given three years to prove that alchemy has the power to develop the Kingdom of Arls.

The Atelier series is known for its charm, sense of humor, and strong willed heroines. These are not stories about the end of the world, but rather about personal growth and development. With the help of the game’s strong localization, players get a great sense of community, and it’s truly a joy to watch Meruru mature into a personable young lady. She’s also helped by a great cast of secondary characters who are quirky and entertaining. The character development is quite strong, but the overall plot lacks a certain spark that was present in prior entries. Those who have played the previous Arland games will certainly enjoy the light-hearted tale and humor more than the overall tale about the merging of the two kingdoms. However, if this is your first Arland game, then the story may feel very fresh and unique, and the localization’s strength is a real draw into the cast of characters and the kingdom of Arls.

Events are still hit and miss to uncover unfortunately. While players have their handy dandy MeMo, this feature is really only good in finding out which ending the player is most likely to achieve, and the tasks need to reach their end goal. What it is not good for is character events, which can be tricky to find for certain characters. While completing tasks and taking friends into combat raises their friendship points, it’s not always easy to know whether or not players have hit certain requirements to make an event appear. Finding events and uncovering the subplots is part of the fun of this series and if one can stick with it, players will be treated to some thoughtful storylines or just plain silliness. Regardless, these events allow players to add more to Meruru’s story, but if these events aren’t found, it makes it much harder to root for Meruru through her main plot. 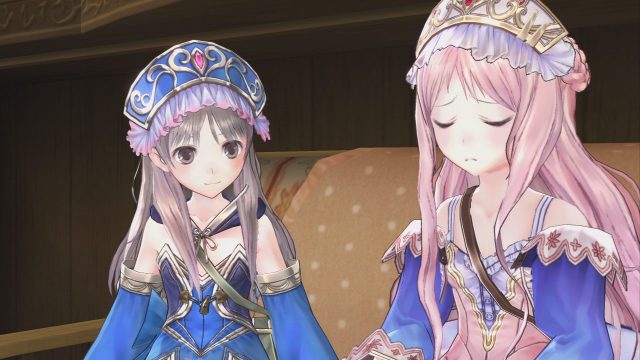 While the plot has elements that are hit and miss, Meruru‘s gameplay is bar-none the best of the Arland trilogy. While players have an initial three years to develop Arls through a variety of tasks, depending on one’s progress, players will be granted extra time. While the licensing system that appears in Totori is taken steps further, it has become a far more expansive structure wherein players must complete tasks and then build new properties in order to gain more popularity and population. Every area that is explored in the game has development tasks that must be completed in order for Meruru to gain development points. The more development points a player has, the more structures that can be built.

What is enjoyable about the development system is there’s no set order to developing Arls. Players can pick and choose what buildings they wish to erect and how they want their nation to develop. While some buildings must be built for ending requirements, they aren’t necessary if it’s not the ending the player wishes to receive. Each building has different attributes to help Arls prosper, such as the Arena which provides income and the boutique which allows for new costumes. This system is addictive and it’s fun to complete tasks, build structures, and watch Arls grow into a national powerhouse. Although the time management aspects are still present, the game is lenient about it. That does not mean players should ignore the time intervals, as it is very easy to lose track of time if one is careless. However, completing development tasks also provides passive bonuses for Meruru, including more battle experience, alchemy experience, and even shorter synthesis times.

Synthesis is still one of the best and most addictive features to this series, and Meruru‘s is by far the most refined. The game sports the same easy-to-use synthesis system as previous games. Meruru can make as many items as her MP allows, after which she might need a nap to refresh. Each item gathered and synthesized has a quality ranking from one to one hundred, and better quality items are more desirable for use in battle and fulfilling requests. Each ingredient has traits that can be applied which boost overall quality, but can also help in battle. The lower the quality, the more that must be synthesized for tasks or the weaker the performance it has in combat. Even though this system is a ton of fun, Gust could have taken the extra step to add some Vita functionality to this particular system to make it a little less samey from its PlayStation 3 counterpart.

Another aspect that has had some enhancements made for Plus is the battle system. Meruru Plus has rebalanced combat to make it slightly easier for players, for better or worse. Unfortunately, it’s not entirely noticeable. Combat still uses the HP/MP/LP system introduced in Totori, wherein Meruru can call for assistance and her companions can also unleash follow up combos when their gauges are full. These follow-up attacks add an extra layer of strategy, and definitely help in terms of piling the damage onto enemies during tough situations. Considering some of the tough boss battles present in Meruru, synthesizing strong items and using follow up attacks are going to be the key to success in most situations. 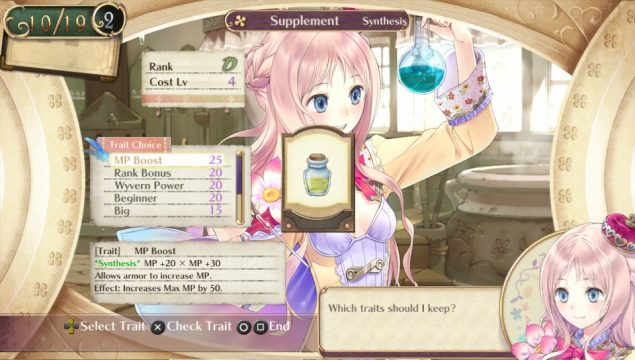 Supplement is a staple in my atelier.

In terms of “Plus” features, Meruru offers all the DLC of the PlayStation 3 version, which includes new costumes, bosses, areas, and scenes, although a lot of this will slip by unnoticed. These features don’t add to the overall experience, not do they make it feel like it’s a new game. While the game lends itself well to the Vita, there’s nothing to make it feel like it is was made specifically for the Vita. It’s especially disappointing for those who have played the game previously, hoping for a better-rounded and updated experience, which this release is sorely lacking. There’s nothing to make this experience feel necessary other than the additional of portability. For first timers, this will likely not apply, as everything will feel like a new experience, while for veterans, this will come across like a very lazy port.

One of the issues with the Plus version is the graphics do take a bit of a hit. While they are gorgeous on the PlayStation 3, scaled down it’s easier to notice a lack of polish in certain areas. Moreover, the frame rate stutters in parts, enemies often are clipped in environments, and sometimes bosses simply disappear. It’s a bit odd considering how much flow the original version had in terms of its graphical quality, so Plus suffers a bit in this department. However, it still sports the same great music, with new additional tracks that are quite enjoyable. It also features dual audio in English and Japanese for those with such a preference.

Admittedly, Atelier Meruru lends itself well to a portable platform. While there’s no touch controls, the game is great to play in episodic chunks on the go. For newcomers, this is a great way to experience the series, but for veterans this is ground that has already been tread, without any true improvements to speak of.