Atelier Firis: The Alchemist and the Mysterious Journey Review

There comes a time in a gamer’s life where a series might not be as fulfilling as it once was. After playing Atelier Firis: The Alchemist and the Mysterious Journey, I am worried about my relationship with this series. For many years this series has been comfort food, something I could always rely on to be entertaining, charming, and just plain fun. Atelier Firis, the eighteenth installment to this long-running franchise takes some unique twists and turns, but the payoff isn’t all it’s cracked up to be.

Beginning in the mining town of Ertona, players are introduced to Firis, a young woman with the ability to spot ore. Hidden in a secluded village, Firis longs to go outside like her sister, Liane. One day, while staring at the door to the outside world, two alchemists burst through, turning Firis’ world upside down. Upon this meeting, Firis becomes infatuated with alchemy, deciding that she must become a licensed alchemist to better herself and those around her. This is the meat and potatoes of Atelier Firis, as players spend much of the game roaming the outside world, gaining recommendation letters from licensed alchemists, and hoping to change Firis’ life for the better.

Unfortunately, Firis’ story isn’t as compelling as it could be. With the game now having adopted an open world model for exploration, story beats are few and far between. When there are glimmers of story, it’s never told in an interesting way, and frankly that is due to the bland cast of characters. While Firis’ immaturity can be endearing at times, her motivations feel flimsy compared to previous Atelier heroines. Many of her supporting cast of characters feel very one-dimensional and under-baked. It’s also easy to miss playable characters in the game depending on how deeply players explore the world. The overall paucity of the actual story, as well as awkward dialogue combine for a simply weak narrative. The quality of the localization is Firis is also sorely lacking, part of the reason the dialogue is so awkward.

As previously mentioned, Atelier Firis adopts open world exploration, and while this is great in concept, it struggles in execution. At first sightseeing through all the areas is quite engaging, especially given the amount of sidequests that can be taken along the way. However, this soon falls apart, as there is a lot of back and forth between areas in Firis. There are two maps: one for the entire world of Atelier Firis, and a local map. While Firis can fast travel to different parts of the local map, there’s no way to fast travel on the world map, meaning in order to get from one place to another, players will have to go through every local map until they get to the location in question. This feels counterintuitive given the size and scope of the fields, and it would have been beneficial to allow fast travel on the main world map to save time and effort on the player. 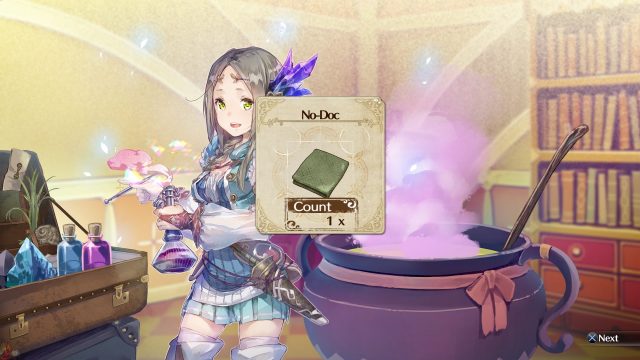 Furthermore, many of the maps aren’t even interesting to explore. In a lot of cases it’s mostly wide open space with the odd house or landmark interspersed with more open space. Some of the areas are decent looking, but even the visuals in this game are marred with large blemishes such as excessive texture pop in, frame rate snags, and even broken textures. While creating an open world experience is quite the risk for this series, there are many technical problems that don’t allow Atelier Firis to measure up.

Gathering on maps now requires Life Points (LP), and Firis has a hundred of them until she needs to rest again. This Life Points system acts as stamina for Firis as she is out exploring, as combat and gathering all take LP. LP can later be replenished at a nearby campfire. It’s not a bad little system, but it doesn’t really add anything to the overall gameplay experience. The weather system from Atelier Sophie also makes a comeback, as different weather patterns change the enemies as well as the types of items that can be gathered. Atelier Firis also brings back the time component, as she must successfully complete her licensing exam within a year. While some find time limits to be persnickety, Atelier Firis is incredibly generous, and it never feels like there is an incentive to rush because of it.

Another area where Firis fumbles is the game’s combat. Much like its processor, Atelier Sophie, Firis‘ combat lacks the depth and complexity of previous Atelier titles where the combat was fast and engaging. One benefit to combat is that while only four characters can go into it, all of them now have access to items. Whatever action is selected for a character determines the wait time for her. On the left hand side of the screen is a gauge that fills as characters perform their actions, and once it reaches maximum, characters can chain attacks. If characters are consecutive in turn order, they can perform an attack together, and the more abilities that are linked together, the better chance that the last character in the chain will perform an ultimate attack. The battle system works well enough, and is certainly a step up from Sophie‘s hands-off approach. However, this is still a step down from what the Atelier series has been in the past, as this turn-based combat system feels fairly basic, lacking in punch. 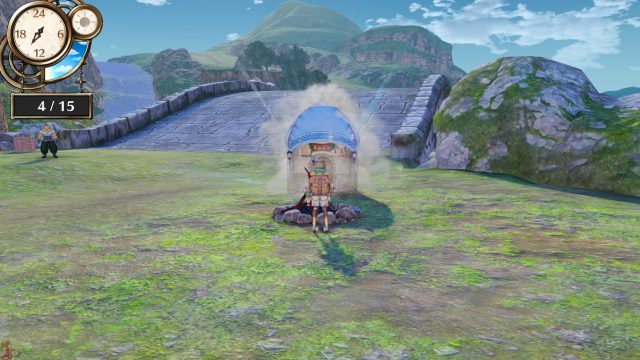 One area where Atelier Firis excels is the synthesis system. Much like Atelier Sophie, synthesis now sports a Tetris-style grid system, where items must be placed on a board. Different spots on the board increase item quality. Unlike Sophie where you have the choice to change cauldrons, in Firis players can now use catalysts to perform item synthesis, which allows for different traits to be added to the overall item. This addition allows for a much deeper and complex system, and it’s actually fun to perform. One more additional change is that synthesis can now be performed at any campfire locationed on the local map, thanks to Firis’ pop-up atelier. This is easily one of the best and smartest changes to the series to date.

The soundtrack in Atelier Firis is decent, and there is good variety of tracks. There are some beautiful tracks that provide a great feeling of wanderlust, and it fits the overall theme of Firis’ mysterious journey. However, much like many of the recent Atelier titles the same cannot be said for the voice work, as Firis is more miss than hit in terms of the English voice acting. Firis’ voice in particular is incredibly grating, high-pitched and whiny. A lot of the other performances come across too awkward or over-the-top. Thankfully, there is a Japanese audio track that can be switched to at any point.

I had high hopes for a lot of the new ideas being introduced, but sadly Atelier Firis breaks my heart in a lot of ways. As someone who loves to get lost in big open worlds, I struggled to enjoy this installment with the same intensity that I’ve had for the Atelier series over the years. Firis feels like a larger step backwards than Sophie did, and I can only hope that the third game in the Mysterious subseries will fix the blemishes, because there are some great ideas here that just needed smarter execution and more polish.