If there’s one thing that’s important to science, it’s the need for reproducibility. Can the same experiment yield similar results each time? In that sense, Gust’s brand of alchemy is very much scientific — if we ignore how fantastic the results tend to be. The developers, having scored a success with Atelier Marie, decided that a repeat of that gaming experiment was in order, and yes, Atelier Elie: Alchemist of Salburg 2 is an experience much like its predecessor. Reproducibility!

Elfir Traum, Elie to her friends and anyone else who has trouble pronouncing her proper name, comes with a lot more backstory than Marlone ever did. Hailing from the small town of Robson, she’d never seen alchemy before a nasty disease swept through the community. Then she got to see a lot of it in action, in the end owing her life to the mysterious woman who came bearing panaceas. From the moment her fever broke, she vowed to travel to Salburg, study alchemy at the great academy, and meet the woman who saved her from the jaws of death.

As nice as it is, however, very little of this backstory is apparent at the start of the game when Elie attends the welcoming ceremony for new students, and it’s only mentioned sporadically over the course of the game, depending on who the player chooses to befriend. The exact details of how she chose to study alchemy, as well as how she came to reside at the academy’s town workshop rather than the student dorms, is included within a mini CD that comes packaged with Atelier Elie, but not in the game itself. Possibly this was done to free up some disc space since voice work takes up a lot of space, and Elie has enough as it is, but it’s still inconvenient — especially for players whose listening ability in Japanese is not up to snuff. 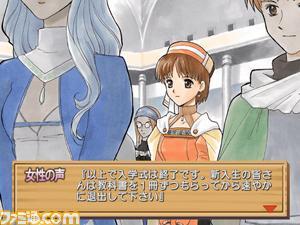 Structurally, only a few changes have been made to the game’s overall flow, but the biggest by far are the annual tests. Every August, Elie must sit through an exam on alchemic practice and theory, with an F resulting in a standard bad ending. This helps break the game into manageable segments while giving the player some idea of where Elie ought to be in her studies, but unless one knows where to check then it’s easy to overlook the list of material to be covered in each exam. Adding to the difficulty is that the actual tests are randomized, with questions pulled from a set pool of topics. While the questions aren’t a concern for anyone with a decent reading level in Japanese, it’s still a potential problem. In many ways, Elie is a close copy of Marie, but with extra bells and whistles added throughout. While many of these additions are helpful, some — such as weather effects in battle — seem largely pointless. Others, like the broader range of possible endings, are a net positive in spite of some implementation issues. 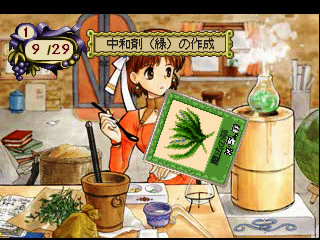 You put your weed in there.

Atelier Elie has a lot more to do than its predecessor. There are two other towns to visit, several new areas to scavenge, and a total of thirteen endings to unlock — about double the number found in the first game. Many characters have their own plot threads to explore, though doing all of them in one playthrough requires a lot of forward planning. Unlike in many later games in the series, there’s no real impetus to do anything but gather materials, make items, and pass the exams. No central plot exists, so it’s completely up to the player as to which bits of story appear. This can make the replay value quite high, but it also raises the likelihood that the player will miss an important date on the calendar and come away thinking that the game has no story at all.

Combat is still every bit as basic as it was in Atelier Marie, with almost no change aside from a weather mechanic that doesn’t seem to do anything. As should always be noted, this is not a series to play for its gripping combat. Bodyguards will need to be recruited in order to survive, but that’s often more important due to the personal interaction aspects of the game.

On the alchemy side of things, it’s still business as unusual, with the core mechanics from Atelier Marie getting a few tweaks and expansions along the way. In addition to many more items in the alchemic encyclopedia, there are also the “Blend” and “Original” alchemy options. Blend alchemy allows Elie to tinker with the proportions of ingredients used in order to produce higher quality items. Getting the best results can be tricky, and one item, cheesecake, will actually get thrown out if it does not meet a certain standard. Fun fact: if you google Atelier Elie in Japanese, it will offer “cheesecake” as a possible search extension. That’s how notoriously aggravating the process can be.

Original alchemy is the process by which Elie takes ingredients and tries to cobble together something new without a recipe. Sometimes there are clues to be had in the game’s text, and other times it seems that this system was included to help sell game guides. Certainly, between this and the Blend system the player will have every reason to abuse the Save/Load function. Otherwise far too much time on the in-game calendar would be lost. 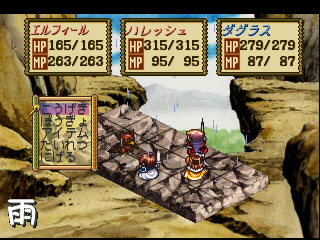 Always bring a buddy or two.

Job requests have benefited from lessons learned in Atelier Marie. While not all jobs at the pub will be doable from the start, a larger percentage will be possible at all times. An extra jobs list has been added that only covers types of materials — for example, precious stones — and any item to fall within that category can be turned in for the reward money. Category requests are thus much more flexible and easier to fulfill, especially earlier in the game. One other welcome change is the ability to check supplies and category data before accepting a job offer. Unfortunately, special requests from friends are often impossible due to limited availability of rare ingredients, lack of knowledge, or because the item requires Original alchemy at a time before Elie learns that skill.

While Gust was unable to retain the services of Kohime Ose for character designs, the void is amply filled by Isaemon Yamagata (professional name of Yomon Ishihara), whose art complements the original title’s well enough that there are no clashes when old and new characters are pictured together, including a handful of beautiful animated sequences. For the most part the spritework is unchanged except for an expanded number of characters and NPCs, who crop up in all sorts of places. The pub with the jobs board regularly changes musicians, cycling through four or five tunes along the way. Musically, Elie and Marie are on even terms, with the better themes having migrated to the sequel and new ones adding to the chorus. There’s an abundance of chipper and chirp, but nothing that grates on the ear or interferes with the happy and determined atmosphere the game presents.

As a second experiment, Atelier Elie tests the strength of series formula, fixing some errors and adding a few of its own. It’s not a perfect game, or even the best exemplar of its series, but it’s a good sign of why and how Atelier came to be Gust’s flagship and mainstay for sixteen years and counting.