Atelier Ayesha Plus: The Alchemist of Dusk Review

…And I Promise You, I’m Doing the Best I Can

When I reviewed Atelier Ayesha: Alchemist of Dusk, it came during a rough point in my life. It’s funny in a way how much some things change, while others stay the same. While Atelier Ayesha Plus: Alchemist of Dusk has some minor changes, it is still very much the same game that released back in 2013, merely on a smaller screen.

The story begins with Ayesha Altugle, who is sitting at the grave of her missing sister, Nio, longing for answers to the disappearance of her younger sister. While talking to the grave, Nio appears in the form of a struggling spirit, and this sets the motion for Ayesha’s journey. Along the way she meets a cast of eccentric characters, each with a desire to help Ayesha solve the mystery behind Nio’s vanishing.

Once again, the story is a fantastic look at the lengths people will go for their loved ones. Ayesha is forced to leave the comforts of her hermitage behind in order to ask for help. Although a tad dippy, Ayesha’s love for her sister is a constant and driving force that pushes the main narrative along and keeps you wanting to uncover the secret. Along the way, players will also discover more about Ayesha’s companions and attempt to help them reach their own personal goals.

The narrative in this Vita port is identical to its PlayStation 3 counterpart, without any changes made. This means that once the story is completed, players are treated to a post-game that lacks agency. If the player has already completed the tasks for Ayesha’s friends before the end of Year 2, then there’s not much left to really discover. It’s also very easy to miss a certain character’s plot events, especially if you choose to go and beat the final boss before competing it. These little aspects are a tad frustrating, but Atelier Ayesha gives the player more than enough time to complete every task the game throws at them. It’s just a shame that if the player has time to spare, there’s not a whole lot to do. 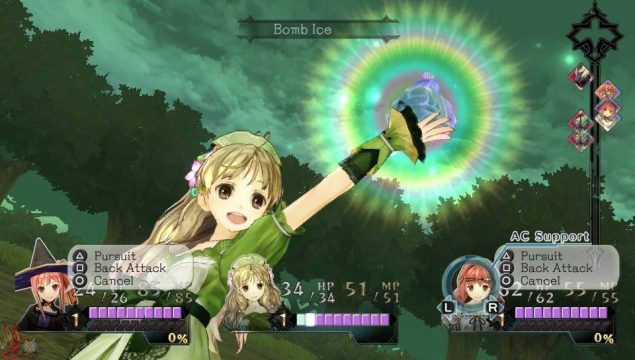 One complaint that does need to be addressed is the size of the text. Atelier Ayesha suffers from teeny-tiny text that cannot be enlarged. This causes issues accessibility-wise, and a way to make it larger would have been helpful on that front. The tiny text also is problematic because in this Vita version, some of the text does not stay within the text boxes, or overlaps on top of other text; for example, when fighting the slag monsters that throw raw materials at the player. These instances look tacky, and could have benefitted from a quick adjustment. Unfortunately, the port feels as though they just shrunk the PlayStation 3 version, and didn’t really attempt to make any adjustments to have the text suit the Vita screen.

Being the straight port that it is, this means that the combat system has gone unchanged as well. Much like the Arland trilogy before it, Atelier Ayesha uses a turn-based combat system, with fairly frequent follow-up attacks that can be done by any character in the party. Ayesha herself takes a more active role in combat, outside of her alchemical contributions. As characters gain levels, they are granted access to more unique skills, including pursuits, knockbacks, back attacks, specials, and finishers. While only three characters can be in the party at a time, Ayesha’s two companions can perform finishing moves, providing the gauge for the move has been filled to 100%. The battle system itself is very standard, but for the few difficult encounters that exist, positioning characters and moving about the battle field continue to be of great importance. It’s still a solid battle system, regardless.

Alchemy is still joy in Atelier Ayesha Plus, and is just as addictive as ever. A black bar simplifies things by telling the overall quality of an item, while four other colour-coded bars show the elemental properties. Higher grade materials result in better quality products. Alchemy is also something that can be done at a leisurely pace, and the game doesn’t pressure the players to constantly make everything there is. Synthesis is painless, and very direct in Ayesha, meaning it’s easy to figure out what the end result of the crafted item will be. Considering how much fun synthesis has always been in these games, it’s simple to lose days and get swept up into the process. 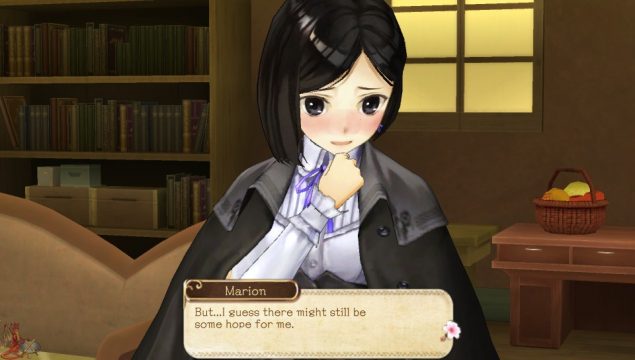 Marion is so darn cute.

Since “Plus” happens to be in the title, it’s important to note the “new” features that exist within Ayesha. First off, it includes all of the DLC that exists from the PlayStation 3 release including new costumes and playable characters. Marion and Odelia are playable from their introductions, and a new area called Hidden Paradise is open as well. The Plus version also includes new enemies, and a Hard Mode for those who desire a challenge. One helpful bonus of the Plus version is the ability to swap party members anytime as opposed to having to backtrack to pick them up from their respective areas. To be honest, there’s not that much plus compared to what other Atelier … Plus versions have offered in the past, but these options exist at no extra cost to those who are interested.

Unfortunately, if there is one thing Atelier Ayesha Plus got wrong, it was the graphics. Sadly, this Vita version suffers from an insufferable amount slowdown and framerate chugging in more active or populated areas. While gathering in areas is not an issue, having enemies charge at Ayesha often causes the game to slow down. Even the load times are a bit longer than expected. This is really disappointing considering how frequently it happens. In terms of voice acting and the soundtrack, not much has changed: the music is still as haunting in areas, as it is delightful. The voice acting is still decent, and for those not fond of the English voice work, Japanese audio is an option.

Atelier Ayesha is still a great game, and one I still treasure quite dearly. It still wells up the memories of my father in ways that are difficult to describe, and Ayesha and Nio’s relationship is one that I think is so beautiful, that it should be experienced by others. While this feels considerably inferior to the PlayStation 3 version, and it’s still worth checking out if you missed it the first time around.