Arc the Lad: Twilight of the Spirits Retroview

Playing the fourth Arc the Lad game first may not seem to make sense, but I found it in a pawn shop that rarely has titles interesting to me and grabbed it at a cheap price. When I finally got around to playing it, the game proved quite interesting as a change of pace from the standard tactical format. Arc the Lad: Twilight of the Spirits isn’t remembered much nowadays, but it does enough right to be worth investigation by the tactical audience.

Twilight of the Spirits begins by acquainting the player with Kharg, plucky young guardian of a human village menaced by encroaching Deimos. These beings come in a variety of bestial forms, but share an antipathy toward humankind that they express by ripping every possible person to shreds. After familiarization with the human side, Twilight of the Spirits introduces Darc, a Deimos slave with aspirations of far more, as a second protagonist. The story then switches between the two periodically, detailing the ambitions of the world-spanning Dilzweld empire to acquire all five Spirit Stones in order to unlock great power. Kharg and Darc both vehemently oppose this, though for disparate reasons.

The dual protagonist setup is a very effective way of depicting the world in Twilight of the Spirits, and many of the moments along the way are strongly rendered. Kharg and Darc are actually brothers, a piece of information that is revealed to the player very early but kept from their awareness much longer, and it makes the dual story interesting to see unfold. While the use of an evil empire seeking magical items that unlock a sealed source of ancient power is not completely redeemed by the game’s execution of this hoary device, enough of its appearance in the narrative is strong to make it memorable. A few scenes along the way are outright silly, and certain sentiments from the characters are expressed often enough to become wearying, but the overall story trajectory remains entertaining.

Twilight of the Spirits‘ tactical combat borrows a bit from later Sakura Taisen titles by forgoing the usual grid and letting characters simply move around inside a circular range. Each of the participants on the field operates according to turn-based rules, but the minute changes possible with this movement scheme make it feel distinct from other titles. Careful adjustment of position is wise, as precise aim will often allow the characters to hit more than one enemy at a time. Spells and techniques are similarly dependent upon position, but moreso as many character abilities are directed from the caster’s location instead of a spot selected by the player. Attacks from the back or side also do more damage, lending even more reason to pay close attention to the location of characters. Thanks to the small size of battlefields and the quick actions of every participant, combat is faster than the usual tactical type, which is often quite helpful. Also nifty is the fact that characters gain about as much experience for hurting enemies as for outright killing them, which helps ensure everyone gets a slice of the rewards. 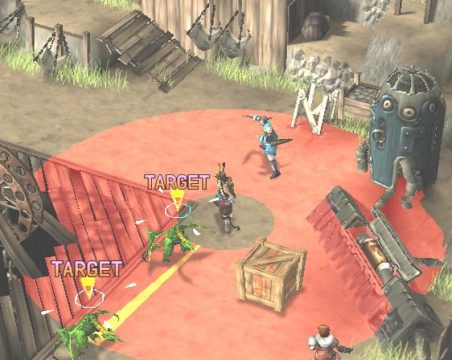 For some reason I feel compelled to shop at Target… I can’t figure out why.

This title also uses something unusual in the tactical realm with regard to collecting spoils on the battlefield. Enemies and destructible objects often yield goodies, but these are not automatically collected. Instead they lie on the field waiting for a character to manually gather them, and failing to do this means they will be lost at battle’s end. While it can be bothersome, since collecting spoils does not end a character’s action the process is not a grave handicap, and combat takes on a unique feel when collecting everything requires this. The placement of breakable objects, along with the good variety of enemies on offer, also helps make each plot battle feel special so that the game does not get monotonous.

Instead of the usual magic points, this game’s special abilities are used with something called Spirit Stones. These do not regenerate automatically, though enemies can drop them on the battlefield. Otherwise replenishing them requires a visit to a shop, and from there they go into a party pool. This mechanic is alternately alluring and bothersome, with the latter reaction mostly stemming from how many button presses in the menu are required to top out the party with fresh ammunition. The system is effective in making battles feel distinct though, and killing an enemy that drops fresh Spirit Stones can be quite helpful in a fight. Also pleasant is the mean by which new abilities are learned, which is entirely at the player’s discretion provided the necessary points gained through combat have been accrued.

Twilight of the Spirits has some irritating menu functions outside of battle, and the length of time it takes to restock Spirit Stones is just the start. When browsing through fresh equipment the game does not make clear what characters currently have, just the bare effect of whatever the displayed thing does. Usable items either go to a character’s specific inventory or one for the whole party, and materials attached to protagonists cannot be sold. A game released in 2003 with such clunky inventory management is hard to excuse. While the fights are rarely long, the paucity of save points coupled with them being the only means of recording progress can be annoying when multiple encounters often occur. 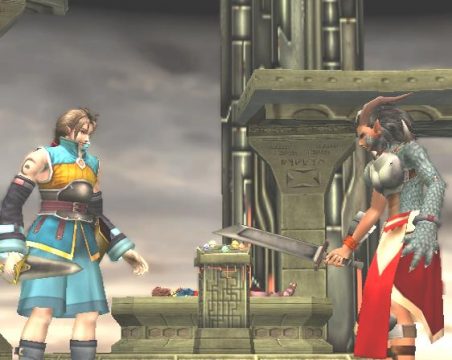 Poor Darc must have constant skin problems where the scales stop. How does he cope?

Most of Twilight of the Spirits will not pose any great challenge to tactical veterans, particularly when random enemy groups lurk at numerous locations to beat down for grinding purposes. A couple of fights introduce nasty wrinkles to make them stand out, but even so the difficulty will not be overwhelming, partly because characters can be revived at full health in battle with inexpensive items. The core narrative can probably be finished in around forty hours, but a few optional parts are around to tantalize the completionists, including a couple of hidden characters.

At first glance the character models look quite good, and they continue to present a favorable picture. The severely limited range of animations they take during story sequences becomes unfortunately hard to ignore, since the leads in particular like to grab their upper right arms on a constant basis to express almost every emotion under the sun. The environments are well-designed but also repetitive after a point. The visuals are still effective for the most part, but such asset reuse is hard to ignore.

There are a few voiced cutscenes in this Arc the Lad, but they’re so infrequent that more time will be spent listening to the characters speak in battle than as part of the plot. The voices chosen by Sony are thankfully pretty good, though the characters tend to only have a couple of lines for each given situation. The musical soundtrack is a triumph though, featuring five different composers and a superb variety of work that ensures the audio never gets boring.

For some reason the Arc the Lad series on PS2 gets dismissed, if not outright forgotten. In the case of Twilight of the Spirits at least, developer Cattle Call’s work does not deserve to be so poorly remembered. The game may not do everything right, but it does enough well to be worth a look by anyone interested in how the series fared after Working Designs was no longer involved with localization.