No Longer a Lad

Arc the Lad II definitely improves on what came before. The first game was released close enough to the PS1’s launch that its brevity was understandable, but the sequel more than makes up for that with enough content to last for days. Most of what it offers is good enough to make sticking with the game for that long seem pleasant instead of a chore, turning this into a title tactical players really ought to investigate.

Arc the Lad closed with its protagonists being labeled terrorists by their adversary Andel, after he orchestrated the assassination of a benevolent king and pinned the crime on them. Arc the Lad II picks up sometime after the first game ended, and at first focuses on the exploits of a skilled hunter named Elc and his encounters with a number of suspicious happenings related to the Romalian government. Elc’s younger days were marked by being placed in a facility where monster fusions were performed upon children, something that the current Romalian commanders know quite a bit about. One of those Romalian commanders is Andel, and it isn’t long before Elc and his compatriots start meeting the protagonists from the first game. Eventually everyone accepts that stopping the Romalian plot is their top priority, but it takes a few nasty jolts to reach that point.

For something from 1996 the narrative is pretty good, giving everyone among the protagonists enough history to make them stand out. The villains aren’t anywhere near so well-drawn, and mostly walk around laughing maniacally and being transparently evil until they are finally engaged in battle. Some of the NPCs wandering around have interesting things to say, as is common in Working Designs titles, but nowhere close to all.

Combat is very similar to the first Arc the Lad, dispensing with menus except at the player’s instigation for tactical action. Speed is the purpose with this setup, allowing characters to carry out basic attacks with the touch of a button instead of going into a menu. Spells and item usage do require menu use, but even the flashiest animations are finished quickly. A unique aspect to battlefield movement is the inability to move through other characters, forcing combatants on both sides to aim for empty space. Characters are able to jump over each other and obstacles to varying degrees, but this sometimes-confining mechanic gives the action a feel distinct from other tactical titles. 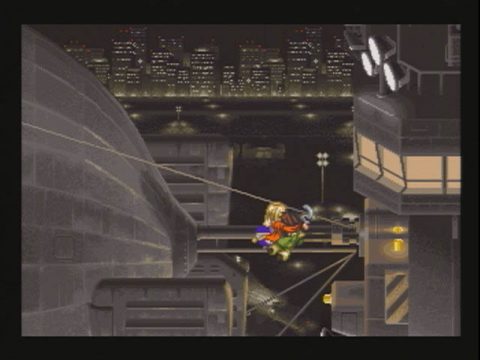 Elc decides it’s time to do his best Errol Flynn!

Inventory was a minor aspect in the first game, but here the characters can equip a variety of weapons and armor that can be swapped mid-battle. Most characters have more than one weapon type to use, and each piece of equipment has individual levels that are increased by employing it in a fight. Certain armor that starts out weak will improve a great deal, and most weapons require considerable deployment to reach their zenith for death-dealing, in addition to characters getting more proficient with specific armaments through constant use. Pumping up equipment in this way is quite addictive, and the ability to give characters a couple of optional spells in addition to their set lists allows for some customization latitude.

Enjoyable as pumping up equipment is, the strict inventory constraints of the game hamper it. Ninety-nine items can be held at any time, which is surprisingly limiting should one wish to keep a variety of gear on hand. A combination shop that can put together otherwise unnecessary materials gives further reason to try keeping things on hand, but without a storage facility of any kind to keep this stuff secure, the odds are very good that players will have to get rid of a lot that might have proved worthwhile. Many of the item descriptions are frustratingly vague also, though this problem was hardly unheard of in the mid-90s.

Completing the core narrative by itself will easily require quintuple the time spent finishing the first game, but the copious extra material can push total playtime past seventy hours. Elc’s employment as a hunter leads to many potential jobs, very few of them necessary to progress. Some of the jobs are tedious hunts through already explored areas for dull goods, but the majority offer a reason to explore areas more thoroughly and net worthwhile rewards in the process. A couple of secret characters and a plethora of wanted monsters are also available to be found should one look. One of those characters even offers a side quest that cannot be completed without an imported save file from Arc the Lad I in which the fiftieth floor of its forbidden ruins was reached and conquered, though save data from the first game offers plenty of other useful benefits if employed.

Arc the Lad had very stupid enemies that got stronger in a hurry to make up for their intellectual emptiness. The sequel’s villains are not necessarily masters of grand strategy, as demonstrated by some of them being unable to grasp the concept of moving in anything but a straight line to the protagonists, but they’re pretty good at attacking from the flank and rear whenever possible. Difficulty is still somewhat unbalanced due to the opposition getting significantly stronger at spots, and the many lengthy dungeons without save points in middle don’t make things any easier. Most dungeons like this include a healing point somewhere but lack the option to save, not the most appealing design choice. Managing the battles is generally possible with sound tactics instead of endless grinding though, even in the very long final fight. Unlike the first titles Game Over system, this one borrows from Shining Force and takes away half the current cash on defeat, further reducing potential stress. 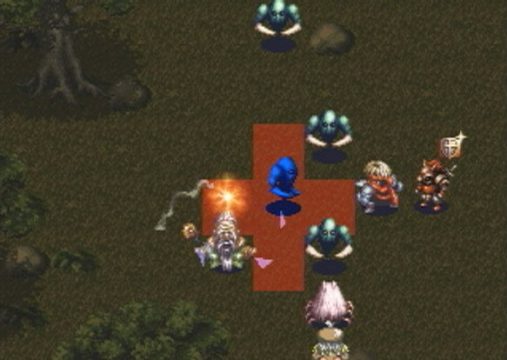 What does the Red Cross have to do with anything happening onscreen?

The environments and sprites of Arc the Lad II look very much like those of the first game, which in turn were not far removed from the Super Nintendo’s capabilities. Closer inspection reveals that the protagonists have a wide range of animations, far more than sprites usually displayed, with their critical hits in battle coming across particularly well. The only oddity is the lack of a running animation for anyone, which makes them seem to glide over the landscape when moving quickly. Enemies look good at the game’s beginning, but the amount of palette swapping done by the developers lessens their visual appeal after the fifth iteration of the same sprite is applied. The results are not ugly, just used too often.

Audio is easy to praise for the most part, since a wide variety of tracks are present and almost all show off composer Masahiro Andoh’s good sense of melody. Some of the tracks are short, but otherwise the musical material is strong. Working Designs opted to leave all the things characters say in battle in the original Japanese, which isn’t a major problem since none of it is essential to one’s understanding of what transpires.

By releasing Arc the Lad Collection instead of individual retail events for each game, Working Designs spared North American players from the pain of having to wait over a year between the not-very-filling appetizer of the first game’s release and its much more absorbing sequel. This sequel is a massive improvement over its predecessor and will absorb many hours for the tactical gamer audience. While I had some frustrations with it at points, I can’t deny the many good times it gave me along the way.