When someone says “Don’t put on the ring!” it’s usually good advice, and it turns out this is especially true in the throwback JRPG Ara Fell.  Originally released on PC, an extended edition has arrived on consoles with additional content and a streamlined experience.  Though the title isn’t breaking any new ground in terms of graphics or content, what Ara Fell does best is combine a classic JRPG feel and look with modern options and mechanics.

Years ago, the gods squabbled, so one goddess goes the extra step to protect her precious creations and a piece of the land was lifted into the sky and the land of Ara Fell created.  The land was home to humans, elves, and vampires, but the elves sacrificed themselves after losing a war with the vampires to protect the floating continent.  Many years have passed, and now Ara Fell is slowly crumbling.  Lita, a 16-year-old girl with a smart mouth and incredible archery skills, has been tasked with the seemingly impossible: collect the six elven artifacts scattered around the continent, then use the set to free the elves from their current stone slumber.  It’s a little rote, though vampires and the overall attention to detail provide an interesting spice to a fairly standard fantasy story. 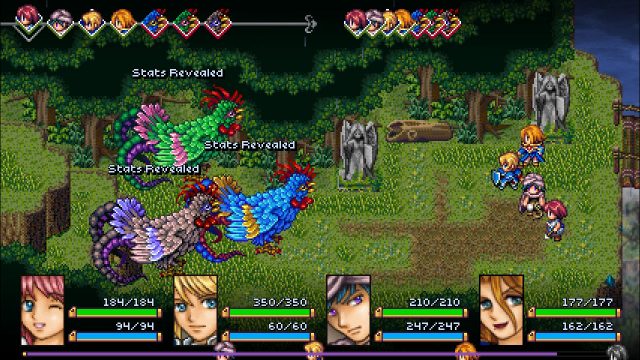 Ara Fell does an excellent job not only regularly reinforcing the colourful world lore, but has great storyline pacing, with moments of levity, seriousness, and sadness intermingled in well written, witty dialogue.  The game’s tale is not just told through the main quest, but also through a large number of side quests, which fill out the world’s lore with tasks small and large.  To assist with much of the back-and-forth travel these side quests require, Ara Fell has a teleport system utilising numerous crystals scattered throughout the world, making backtracking considerably easier than the traditional games it imitates.  Though side quests largely consist of fetching items, typically the locations match up with the main story anyways and the rewards make the time spent absolutely worth it.

Along the way, Lita is joined by three other party members: Adrian is a hearty battler with a sword and a shield, Doren is a musician with healing prowess, Seri Kesu wields powerful magics.  Each time a character levels up, players can place ten points in four stats: attack, defence, agility, and magic.  Later in the game, each character can also choose an advanced class, which allows them to specialize further into one of their two strengths. Seri can boost her elemental damage or focus on dark powers which siphon hit points from enemies; Doren can further boost his healing or become a generalist; Adrian can transform into the ultimate tank or become an aggressive berserker; and Lita can become a heavy damage dealer focusing on single target critical hits or specialize in area-of-effect attacks and party buffs.

Each character also has five pieces of equipment to wear into battle.  Instead of replacing these with new store-bought items, the player is instead tasked with crafting upgrades with materials scattered throughout the world.  This includes dust, ores, and threads collected by scouring the world, as well as hides and essences dropped from enemies.  Each gear slot can be upgraded four times, and improving armour is absolutely essential, particularly on higher difficulties.  Players can further customize an artifact each character has with buffs, which are hidden through the world and can be found in treasure chests, purchased from vendors, or rewarded for completing quests.  These buffs run the gamut from increasing stats to adding benefits like crit rate or life leech. 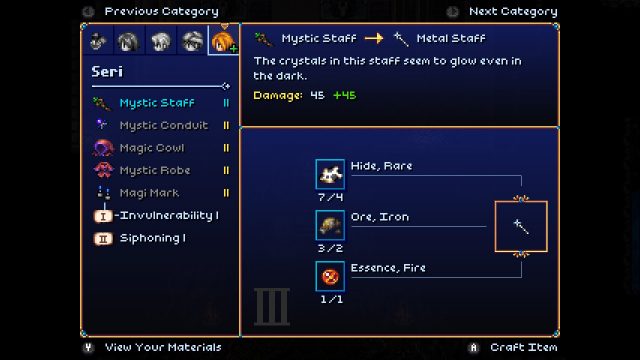 Crafting and customizing equipment is crucial to progression.

Combat looks and feels like a SNES-era RPG, but isn’t tied to the restrictions of yesteryear.  Party sprites line up on the right of the screen while enemies are on the left, with a meter at the top of the screen showing turn order for each round of combat.  Many abilities allow the player to manipulate this turn order, allowing allies to go sooner while pushing back enemy attacks to later in a round.  While combat early in the game is fairly open and there’s a lot of different ways to overcome challenges, closer to the end it becomes a touch repetitive, as the goal eventually becomes loading up bosses and even most regular enemies with numerous debuffs before letting loose whatever party member has the highest damage potential, based on what classes the player specializes in.

If all of this sounds strikingly familiar, it shouldn’t come as a surprise.  Ara Fell isn’t trying to be something groundbreaking or add a unique dimension to the genre; instead, it focuses on taking the standards of a past era, and polishing them to a high sheen.  Combat feels fast while not abandoning niceties like a visible turn order, and world exploration feels vast without requiring an excess amount of meandering.  The world feels alive, teeming with NPCs and quests that add an engaging level of depth.  Grinding is required when playing on the more challenging difficulties, but for those largely interested in the story and feel of the world, there’s a way to circumvent it.

Breaking from the old-school feel of the game are Ara Fell’s four diverse difficulty levels.  The game’s Normal mode allows players to generally glide through the game without grinding, while the Hard difficulty encourages players to do a small amount of grinding, craft potions more often, and make complimentary class choices.  Expert difficulty requires grinding, requires careful management of gold and crafting materials to ensure enough items are on hand, and demands players make the best class choices.  On the opposite side of the spectrum, Story mode adds an ability to the player’s combat menu that immediately wipes out all enemies, including bosses, for those looking to primarily experience the game’s story and don’t want to spend time grinding; this ability is optional to use, and even players on Story mode can choose to battle as normal. 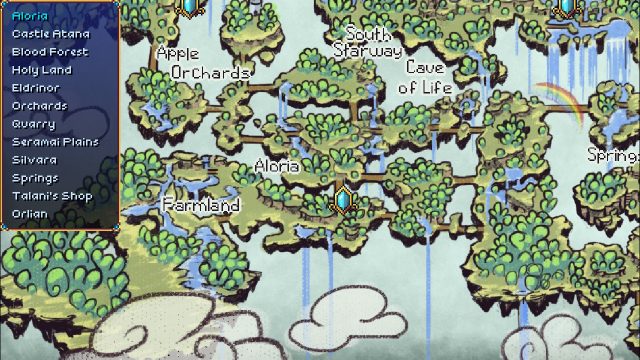 Ara Fell can be briefly described as easy on the eyes, it does a good job re-imagining classic sprite work.  SNES games couldn’t look this good, but the game does a great job interpreting what many players remember the 16-bit era looks like, which is something numerous indie games have excelled at, but it still feels charming each time.  The world has numerous distinct regions, from inside of a giant mine to a fiery pathway between two important areas, a wintery wonderland to a lush apple grove.  The game’s sound does a great job supporting the world’s ambiance, with typical JRPG fanfare.  It won’t be music to hum after the game’s completion, but for the twelve to twenty hours players can easily sink into the game depending on difficulty, it’s satisfying.

In the end, Ara Fell isn’t showing off anything that hasn’t been seen in games for many years, but the full package comes together well; while the adage “greater than the sum of its parts” is sometimes overused, Ara Fell is an excellent example of the way a game can come together and simply be fun.  For those craving a JRPG that feels like it could be played on a Super Nintendo, but still want modern conveniences like adjustable difficulty level, efficient world travel, and moulding characters based on what makes the most interesting party for the player, Ara Fell is a prime example of a throwback RPG.