What lay behind the confusing decision to give this game the title Alundra 2 when it bears almost no resemblance to the first? Halloween III: Season of the Witch may have had no relation in its plot to the preceding Halloween films, but at least it dealt with the holiday — Alundra 2 has no mention of its title anywhere within. The style of play is superficially similar to 2D action RPG of the original game, but shifting everything into 3D makes even that resemblance a small one. Sadly, complaints about the inappropriate name are just the beginning of Alundra 2‘s problems.

The kingdom of Varuna has seen some bad times lately. The aristocratic Baron Diaz has overthrown its king, using a regally-dressed wooden puppet to keep the populace under control. Diaz garnered the assistance of a rather Martian-looking magician named Mephisto, who has the habit of using magical keys to turn things into his evil servants. Seeking to right the wrongs of this misrule, Princess Alexia desires the aid of Flint, a renowned bandit who has angered Diaz’s regime.

Several RPG clichés are implicit in that synopsis, and Alundra 2 lets them through without any attempt to insert twists. Alexia being an involved character would seem to presage something interesting, but her main contribution in the early parts of the game is to nag and annoy. Later in the game she experiences a certain problem with abduction that links her to umpteen other video game princesses, leaving the mute Flint to carry the plot on his own. A trio of pirates serves primarily as comedic relief, with the slight problem that their comedy isn’t very funny. Ancient sealed evil, the good guy being suckered into doing the bad guy’s work for him, and wholly unsurprising backstabbing also occur. Alundra 2 additionally manages the neat trick of introducing plot tangents, most of them having to do with the pirates and their fellows, which are then ignored in the rest of the game.

The best that can be said regarding Alundra 2‘s myriad mistakes in plot is that Activision did a very good localization job. The effect may be something like watching Tom Wolfe take responsibility for the English phrasing of a Russian Transformers fan story, but it’s there. Gauging how Activision would have done using a better source is difficult, but the text tries its hardest to be entertaining, and the voice actors do solid work. 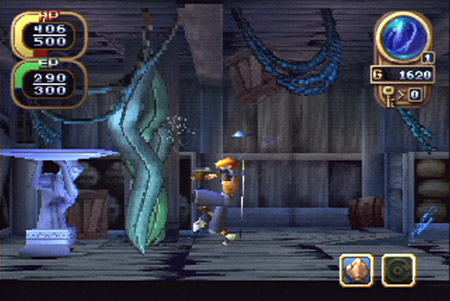 Move underwater – almost as fast as in real life!

In the story sequences, Flint is constantly being trounced by his foes and the environment. This is an accurate demonstration of what happens when he shifts from being displayed in the cinematics to navigating the locales of the game, which is a 3D overhead platformer. In its gameplay, Alundra 2 does somewhat resemble the original game, but the concessions that 3D demands do it no favors.

Foremost among those concessions, since the game is still seen from an overhead view, is the need to switch the camera’s angle in order to view the obstructions facing Flint clearly. While beneficial at many times, the need to adjust the camera in the middle of a puzzle that requires split-second timing is a great hindrance. This nuisance is widespread in Alundra 2, and will wear down the patience of all who experience it quickly, with the added demerit of sometimes making it hard to determine where items vital to a puzzle’s solution will land. It’s even more bothersome in combat, with the fact that Flint sometimes aims in the wrong direction when attacking an enemy apparent only in hindsight.

The actual puzzles of Alundra 2 are somewhat reminiscent of those in the first game, right down to the unforgiving timespan offered to complete many of them. This should have been enough frustration, but Flint isn’t exactly a powerhouse in the agility department. The penalty for missing a beat in Alundra 2‘s puzzle solving is usually to reenter the room, but that’s no trivial task in a game with many gigantic areas that demand lengthy backtracking. Coupled with the aforementioned considerable camera control frustrations, this makes completing the puzzles in Alundra 2 a lot more like arduous work than anything fun.

Combat in this game follows a simple enough blueprint. It requires pointing Flint in the right direction, then hitting the enemy with his sword while trying to dodge its attacks. Doing this is sometimes difficult when Flint is in the thick of the opposition and the player is challenged to figure out in which direction his attacks need to go. Flint’s sluggish pace also applies to his damage recovery, which requires a lengthy animation of him getting back to his feet, during which the player’s input has no effect. His sloth is also bothersome against certain foes, notably the bosses, which tend to be faster than their target. It’s fortunate that healing supplies are widespread in the game, because Flint will need them frequently. 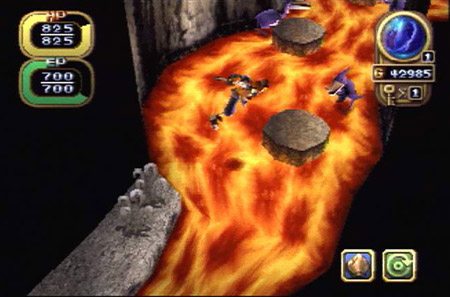 Most of Alundra 2‘s inventory management is acceptable, but one particular aspect would have benefited greatly from a shortcut. As Flint progresses through the game he acquires a quartet of magical rings, all of which are necessary to solve various puzzles. A means of quickly cycling through them without tediously entering and exiting the menu would have been very helpful. On the other hand, Alundra 2 does possess a nifty means of gaining money, by way of smashing open NPC piggy banks to take their contents repeatedly.

The first Alundra‘s look has aged very well thanks to its use of 2D sprites. Alundra 2 demonstrates just what the PlayStation could do with 3D in close-up from a development team that wasn’t pushing the machine to its zenith, and the result is a specimen that modern art museums should preserve, as a reminder of the ugliness humans can create. For some inexplicable reason, the developers deemed it necessary to use close-ups of the ugly 3D character models during cutscenes, apparently so that the cushioning distance granted during the actual gameplay would be forgotten.

Kouhei Tanaka’s score is not one of his best efforts, but nevertheless manages to never become irritating. Activision’s English voice acting is rather good, and the cast does everything it can with the source material. The overall aural effect is quite pleasant, with the exception of the infuriating sound effect produced when Flint is low on health, which does not go away even when within the menu.

Working Designs had the right idea when it refrained from localizing this game. Activision’s work is nothing to be ashamed of, but no amount of polishing a piece of pavement will ever make it into a gemstone. Alundra 2‘s few parts of genuine interest are buried inside a clunky game that offers no reward for the time spent to complete it.