From Obsidian With Love

Good morning, Agent Thorton. Here is Ali Shaheed, a wealthy Arab oil sheik, and known affiliate of the Al-Samad terrorist network. Shaheed’s organization is believed to be responsible for the destruction of a 747 passenger plane last week, and he may also be funding terrorist cells in both Europe and Asia. Your mission, should you choose to accept it, is to determine the scope of Shaheed’s organization, his financiers and targets, and if possible, to bring him to justice. As always, Agent Thorton, you will be acting under the Alpha Protocol, and we will disavow any knowledge of you or your actions. This message will self destruct in five seconds.

Okay, maybe it won’t self destruct, but the above is a pretty good summary of what Alpha Protocol is all about. Part James Bond, part Mission: Impossible, part (insert popular spy franchise here), Alpha Protocol offers up a compelling protagonist in Michael Thorton, and conjures a tale of political intrigue, deception, and heart-pounding action that can rival any of them. Throw in a terrific dialogue system and a large cast of memorable characters, and Alpha Protocol is definitely a game that sticks with you.

Although the game isn’t heavily dependent on statistics and equipment, there is an unquestionable sense of progression thanks to a complex set of skills that can be developed and enhanced as experience is gained. At its core, Alpha Protocol plays like a third person, cover-based shooter, but trying to play it like any other shooter won’t work for very long. Shots fired can end up anywhere within the rather large targeting reticle, which makes long-range gunfights difficult, particularly if the player happens to be impatient. 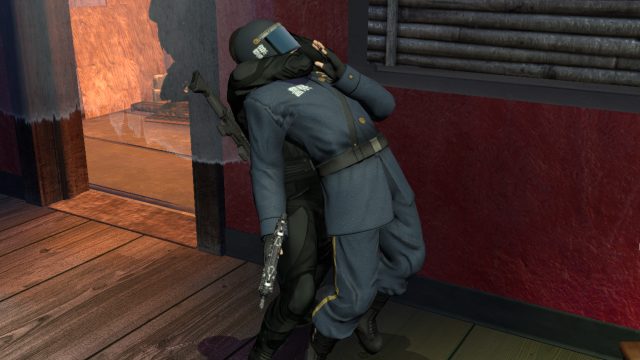 Instead, Alpha Protocol encourages players to use stealth to take down foes and make every shot count rather than fire blindly. Specifically, players are encouraged to make use of the critical hit system the game employs: by holding the crosshairs over a target for a brief period, the reticle becomes smaller, and when it reaches its minimum, the next shot is not only that much more accurate, but it will also do a lot more damage. This is made easier as the game progresses by placing skill points earned each level in various skills and unlocking new abilities that can turn the tide in difficult situations. Points in stealth reduce enemy sight range and grant you the ability to become absolutely silent and even invisible for brief periods. Thorton is able to use pistols, assault rifles, sub-machine guns, and shotguns, and points in each not only improve your stopping power and accuracy, but also decrease the time it takes to line up a critical hit. Each weapon also has a special, activated skill associated with it.

Thorton is also able to train in the use of gadgets, martial arts, and a handful of other abilities, each of which bring something different to his arsenal. Training all of them to any serious degree is impossible, so players must decide what they want their character to focus on, and there are many different potential builds. Unfortunately, this skill system is also a detriment to the early portions of the game, creating a steep learning curve and a rather poor initial impression. Until a few levels worth of points have been invested, the game just feels awkward and stiff.

Once Thorton’s skills start to improve, however, the game becomes addictively fun, partly thanks to the fast-paced plot. In fact, some skills become downright insane once enough points are invested. A maxed out stealth skill lets Thorton’s invisibility skill last for a full 30 seconds, during which time he can run through an area and knock out a significant portion of the enemy forces with stealth takedowns. The pistol weapon, which seems quite weak in the early game, ends up becoming blatantly over-powered. Maxed out, Thorton can line up critical hits from 40 meters without ever leaving cover, and the Quick Shot ability allows him to freeze time and fire six critical head-shots in the blink of an eye. In my playthrough of the game, this ability managed to devastate three quarters of the final boss’s health right at the start of the fight.

Although Alpha Protocol does improve after its initial, awkward stages, some problems remain a constant. The cover system is rather fidgety, which can make dodging grenades a frustrating experience. The boss fights are also completely out of place, and really shouldn’t have been in the game at all. Most of them force the player into a fire-fight or even a fist-fight, and these sections are simply not enjoyable. Despite these snags, the majority of the game is very enjoyable. 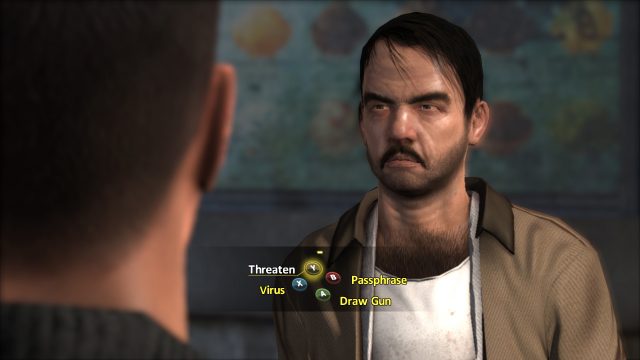 When not sneaking around and shooting people, most of Thorton’s time is spent doing what any good spy does: gathering intelligence, and this is where the game’s roleplaying experience really shines. There are many ways in which Thorton can obtain information: he can speak with his vast network of contacts, he can purchase it on the black market, he can hack into computer systems to obtain it, and of course he can investigate leads in person, which is where the stealth comes into play. Choosing which leads to investigate, which information to share with other parties, and of course, who to trust, all change different elements of the game’s story. While one course of action might please a contact and gain you favor, it might also lead to negative ramifications with another. Decisions are made by choosing one of three possible stances: suave, aggressive, and professional. Suave choices make use of wit, intuition, and charisma to charm or annoy. The aggressive stance has Thorton resort to blackmail, extortion, and threats to forcibly obtain what he needs. Finally, the professional stance focuses on the mission first and foremost, getting straight to business. Different people react favorably to different stances, and choosing the right ones can not only lead to favorable outcomes, but can even unlock special perks that provide permanent bonuses to Thorton’s abilities.

While the story and gameplay are fairly polished, the visuals are lacking in detail. In particular, the texturing is just atrocious, particularly on character models. It’s most noticable in cinematic scenes, when characters are depicted wearing layered clothing like a suit. In most cases, it looks like it was just painted on their body, and the edges are blended really poorly, making it look like said paint is running. Facial expressions, at least, are well done. In any case, they’re acceptable, but not impressive at all.

The audio is of much higher quality. The voice acting is top-notch, and with a diverse group of characters from all around Europe and Asia, they are also well-cast. The soundtrack doesn’t have the same instantly-memorable charm of a James Bond film; indeed, it’s rather forgettable, but it sets the mood well, and thus does its job.

Although Alpha Protocol isn’t all that revolutionary, it’s certainly one of a kind. Espionage RPGs, as SEGA touts it, are certainly rare, and I’d be hard pressed to name another. Despite a few hiccups, the game is a lot of fun to play, and the story keeps you guessing right until the final moments. All told, Alpha Protocol will probably put you back about twenty hours for a single playthrough, depending on how you play, and multiple playthroughs can easily eat up more if you’re so inclined. If you’re looking for a break from fantasy and science fiction, Alpha Protocol is a terrific choice.