A Year Late for a Very Important Date

Every child in North America grows up hearing certain stories. Grimm’s Fairy Tales, Alice’s Adventures in Wonderland and The Wizard of Oz are all stories that everyone reading this has probably heard at some point in their lives. A Witch’s Tale is a charming DS RPG that absorbs these classic stories to create a simple, Hallowe’en-themed game that combines them all into a single world.

A Witch’s Tale is about a bratty young girl named Liddell who dreams of becoming the greatest witch of all time, even greater than Queen Alice who defeated and sealed away the Eld Witch a thousand years before. Searching for some fabled, ancient runes, Liddell is transported to a creepy castle by an old fortune-teller, where she discovers a book that contains the magic she’s been seeking. Unfortunately, her headstrong leap into the unknown ends up releasing the Eld Witch, who is obviously quite annoyed at having been locked up for a thousand years. Liddell is then stuck cleaning up the mess she made, assisted by a tomato-eating vampire named Loue and a large number of magical dolls she finds on her journey through the world’s six kingdoms.

The story primarily draws from Lewis Carroll’s book Alice’s Adventures in Wonderland, and many characters and themes from the story play a major role. The White Rabbit, Mad Hatter, Cheshire Cat, March Hare, and Dormouse are all present, and the theme of playing cards plays a major role. Even the name Liddell is drawn from Lewis Carroll’s life: Alice Liddell was the girl for whom his famed story was written in the first place. However, the story draws heavily from many other famous children’s tales, including Hansel & Gretel, The Wizard of Oz, and 1,001 Arabian Nights. 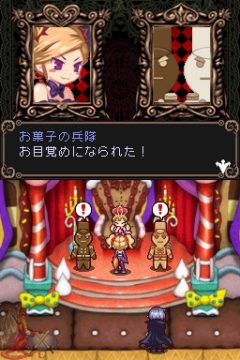 The candyman makes everything he bakes satisfying and delicious.

Each of A Witch’s Tale‘s six thematic worlds plays out in a fairly similar fashion. There’s a princess that needs to be rescued, but in order to reach her, three items need to be found and brought to Liddell’s fortune-teller friend to be fashioned into a key which will unlock the gate to the castle. Each item is hidden behind various puzzles and dungeons that need to be explored, and you will often find yourself traveling from one side of the world to the other in order to gather the next piece.

As one would expect in an RPG, there are plenty of battles to fight along the way. Encounters are random, occurring when a shadowy black hand appears beneath Liddell and drags her down into the underworld. Combat is turn-based, first person, and incredibly easy. In fact, A Witch’s Tale practically plays itself. Liddell has an enormous MP pool from which she and her party all draw from. There are a wide variety of elemental spells to choose from as well as party members, but the battles are so easy that there’s never any cause for alarm. Healing is hardly ever needed, even during boss fights. However, the game still manages to be fairly fun, as finding enemy weak points causes battles to end much quicker, making mindlessly attacking a poor choice. The encounter rate is strangely erratic. Sometimes it seems extraordinarily low while at other times it can be frustratingly high.

Liddell’s party is made up of the dolls she finds as she explores the game. There are a large number of them scattered throughout the game world, but players will likely find most to be fairly useless (although they’re all well-illustrated.) The most useful dolls, by far, are the ones acquired at the end of each level. These dolls don’t gain experience like regular ones, but they come with significantly higher stats, making them powerhouses that make the next level much easier and speedier. Towards the end of the game, an easy-to-defeat optional boss provides a doll that quite literally makes the game impossible to lose. It has two spells, one that makes the entire party invincible for the turn, and another that restores the entire party to full health, cures all status ailments, and finally restores all your MP, including the MP used to cast it. 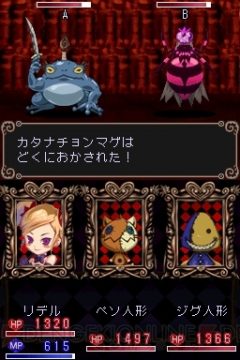 Despite a lack of animation, the character and enemy portraits provide more than enough visual style.

A Witch’s Tale is played entirely with the DS stylus, and it works out quite well. Liddell’s movements are quite smooth and accurate, and the touch controls in battle are easy to use and allow for a very attractive user-interface. There are a few places where traditional controls would have been beneficial, but the game gets by quite well without them.

The aspect of A Witch’s Tale that stands out the most is unquestionably its art style. Taking cues from Tim Burton, the art is heavily inspired by western Hallowe’en traditions. Jack’o’lanterns, bats, wrought-iron fences, and trapezoidal, lopsided gravestones are among the decorations in the early stages of the game, and the character designs all stick to this motif as well. The designs for each of the many unique dolls are particularly well done. Unfortunately, the style doesn’t always shine through as well as it could. Many of the maps are extremely repetitive, and there are several areas where the tiling gets to be particularly noticeable. Palette-swapping for enemies occurs frequently.

The audio is limited by the DS’s capabilities, but is pretty good in most respects. The music is catchy and always appropriate, and certain melodies can be surprisingly haunting. Unfortunately, there isn’t much in the way of sound-effects, and the ones that are present aren’t particularly good. They tend to blend together. There isn’t any voice acting, but the dialogue and characters are all personable enough to get by without it.

It’s hard to say whether A Witch’s Tale is good or bad, as it’s inevitably going to come down to whether or not you’re a fan of the stories and style from which it draws its inspiration. It is quite possibly the easiest RPG ever made, which will unquestionably turn off many people, but if that isn’t an issue for you, there’s plenty of style and charm to be found. The game clocks in at about fifteen hours, which is fairly appropriate for such a simple title. Personally, I found A Witch’s Tale to be an enjoyable experience, but it’s not something I would readily recommend to everyone.