Back to the Kaiju Future

Japanese developer Vanillaware has been quiet in the last few years, with its latest title Dragon’s Crown releasing back in 2013, though that did get an enhanced PlayStation 4 port in 2018. The studio has returned with a bang in 13 Sentinels: Aegis Rim. There is currently nothing really like it, and though the real-time strategy combat alone makes it worthy of note, the game truly shines with its absolutely enthralling sci-fi tale that slowly builds up as the game progresses. As a result, Vanillaware has produced one of this year’s standout RPG experiences.

13 Sentinels: Aegis Rim is primarily set in Japan in the year 1985, but swiftly introduces its heavy sci-fi elements, including time-travel to both the past and future, giant robots, and mechanical kaiju. It’s absolutely not told in a linear fashion, which is made apparent from the start when players are put through a prologue lasting a couple of hours. The prologue provides the opening sections for seven of the thirteen protagonists’ stories, each followed by a tutorial battle pitching mechs piloted by the high school protagonists against invading waves of enemies. After these segments, players gain a bit more freedom to proceed as they wish, choosing to advance individual characters’ stories or progress through the fight against the kaiju, though there are some necessary bottlenecks to keep a semblance of causality.

The story throws players in at the deep end in terms of understanding what’s going on, but this is all intentional. 13 Sentinels: Aegis Rim is a story that is pieced slowly together, and though this could easily go wrong, Vanillaware has managed to set it up almost perfectly. The way the picture builds up keeps one wanting to learn more about the situation and to follow the many different plot threads running throughout the game. There can be a lot to keep track of, but an analysis option in its main menu — along with the character stories and combat — lets players note the chronological order of events and keep track of the main characters, important items, concepts, etc., with further details added as they are learned. 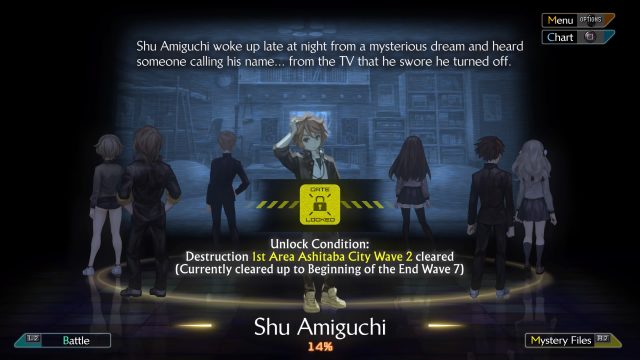 The thirteen stories intricately intertwine, with players having some freedom in the order they work through them, barring certain progression requirements.

Despite having thirteen protagonists to deal with, as well as some other major characters, Vanillaware does a magnificent job in ensuring each of them is individually memorable and plays a crucial part in the story. With the characters being all high school students, there is some irreverent high school drama, but it’s always used to either build up the character personalities or as an interesting dichotomy to the larger world-impacting plot. Deciphering all of the relationships and watching the characters’ growth as they come to understand the situation is a pleasure.

All of the great little character moments are matched by the twists of the main plot. The care and attention that has gone into how much information players receive, and how that affects the telling of the story, is readily apparent. Some may notice slight inconsistencies in events but, without revealing exact details, these are all part of the plan and the ultimate payoff is more than worth the thirty-to-forty hours it will take most to get through the game.

Story events use the 2D style familiar to Vanillaware fans and play out similarly to point-and-click adventures with players moving their character around, examining things, and using clues. The character designs and animations on them are great and ensure 13 Sentinels: Aegis Rim stands out visually, with the only real quibble being that there is a limited number of locations, and while they still look great, they are visited so many times as to lose impact. Progression through chapters is largely linear, though certain characters have events with multiple routes, but even then, taking certain routes are usually required before further ones can be taken. There isn’t anything that requires much thought from players to progress things; it’s simply a matter of doing whatever is available to do, occasionally trying different things in those cases where there are multiple routes to go through. 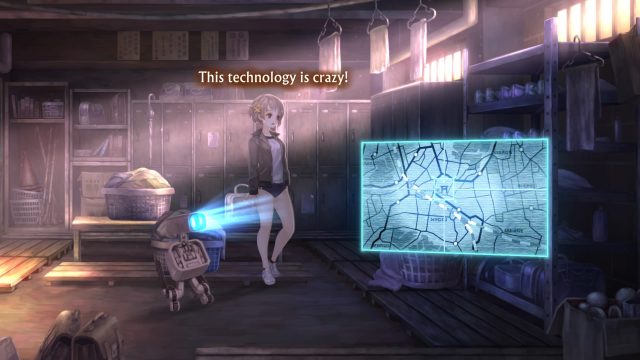 That’s not the least of it.

Combat is wildly different from the usual action RPG fare that many of Vanillaware’s fans will be familiar with, but the developer has tried real-time strategy before with the PlayStation 2’s GrimGrimoire. The combat sequence of events sees the eponymous Sentinels, each piloted by one of the thirteen protagonists, aiming to prevent the waves of kaiju from reaching and destroying the special terminal they deploy around. Up to six Sentinels can be deployed for active battle, with the remainder staying behind to act as a last line of defence.

Each battle has a time limit for players to survive until, after which the defence terminal activates and manages to eliminate all remaining kaiju, but most of the time on the standard difficulty victory will be achieved by simply defeating all of the invaders. Each Sentinel has up to six attack or support skills equipped that they can use, followed by a cooldown period until they can use another one or move again. All ground-based Sentinels and kaiju are forced to follow the roads of each map, and though kaiju will primarily focus on getting to the terminals, their attention can be bought by the Sentinels. However, in addition to the terminal being breached, failure also comes if any of the Sentinel pilots are killed. Sentinels can automatically retreat and repair when knocked to zero HP, but they will eject the pilot to do so, making them incredibly vulnerable for that time.

The combat visuals work well in further establishing a contrast between the main story and combat elements. Rather than trying to convey the combat in a realistic manner, 13 Sentinels: Aegis Rim uses a tactical isometric map that displays all the information needed for players to emerge victorious. Though players don’t get to witness the full exciting action of giant robot combat, it ends up as a highly effective display method, ably conveying the overall picture and at least giving a measure of the action, with impressively-animated physical attacks, beam cannons, missile massacres, and more.

What makes the battle system successful is the complex set of relationships between the four generations of Sentinels, their available skills, and the different types of enemy kaiju that appear. The four generations are suited to different roles — melee, all-around combat, long-range, and aerial support — and making the best use of each type for the situation is important. Having at least one Sentinel able to fire off EMPs is an absolute must for any map featuring flying enemies, as melee skills will not connect until they are brought down to the ground. Even just on the tactical map, battles look appropriately chaotic, particularly in the latter stages, but there is always a sense of strategy involved as well as available moves that can be made to bring things under control when the enemy forces look overwhelming. With its good depth and mixture of strategies available, combat remains an exciting experience throughout. 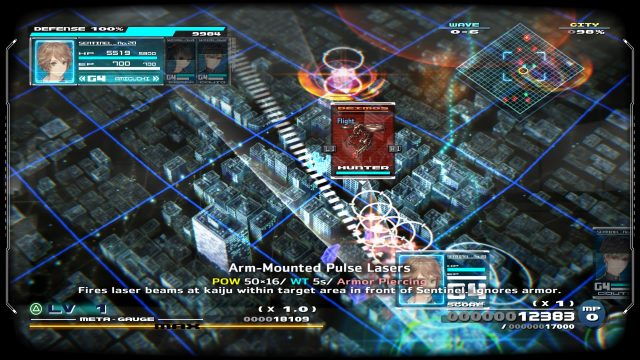 Though it doesn’t show fully-detailed giant robot action, the combat is still exciting.

After each battle, the active pilots are given experience and level up, unlocking new pilot skills every five levels that offer bonuses for certain situations in combat. Players also earn points from doing battles and completing story events, which are used to purchase upgrades for the Sentinels, unlocking new combat skills and, after a certain point, upgrading the base stats. There are three difficulty settings to choose from for each battle, with the normal difficulty requiring good strategies in the initial deployment and upgrade choices, as well as on the fly. The UI for upgrading is a bit less clear than it could be, but there is an appreciable power jump seen when upgrading skills.

The balance is such players don’t need to worry about creating optimal builds to be successful and it is easy to attain the points to be sufficiently powerful. Though it is possible to simply use the same set of Sentinels throughout, 13 Sentinels: Aegis Rim successfully encourages rotation through the different enemy types that come up in each combat and certain bonus objective requirements, as well as the score multiplier awarded if players stick with the optional exhaustion system that requires pilots rest after two deployments on the field.

With it set to be added in a day one patch, English voicing was not available for the review. However, the Japanese voice acting is excellent throughout, and given the very strong text localisation, Atlus’ past endeavors, and the announcement of an experienced voice cast, there is no reason to believe it won’t be strong with an excellent narrative there to convey. Excepting a few cases, the music stays very much in the background, but it and the various sound effects build up with the visuals to provide a strong atmosphere.

13 Sentinels: Aegis Rim deserves much more attention that it feels like it has gotten prior to its launch. The game is absolutely one of this year’s standout RPGs, and it’s particularly refreshing to see that in something that brings both unique combat and storytelling to the table. Vanillaware has outdone itself here.