13 Sentinels: Aegis Rim is definitely something different for RPGamers to sink their teeth into, as what I’ve seen so far has me fascinated for what is yet to come.

Some RPGamers may have been a bit surprised after seeing the first gameplay footage of Vanillaware’s newest title, 13 Sentinels: Aegis Rim. However, it’s certainly not the first time the develop has tried its hand at real-time strategy, with the PlayStation 2’s GrimGrimoire seeing the developer doing just that. Being given an early look at the game’s combat of giant mechs versus kaiju, as well as the opening portions of what looks to be a deep sci-fi story in its three-hour prologue, indications are that the game will offer a thoroughly compelling experience when it launches next month.

Quickly getting players up to speed on what’s going on is absolutely not 13 Sentinels: Aegis Rim’s intention, but that’s not necessarily a bad thing. This is absolutely a game where players are expected to slowly build up a picture of what is going on. The prologue introduces seven of the major protagonists, each given a point-of-view introductory chapter. It’s very hard to judge what order these prologue events take place in and their connections as they are given, and that’s before all the time travel elements are bandied about, but the overall premise appears to be that all of the protagonists are high school students and they all somehow end up together around the same school in the mid-1980s in order to deal with a future threat of invading aliens, though some are initially from other time periods separated by 40-year gaps. 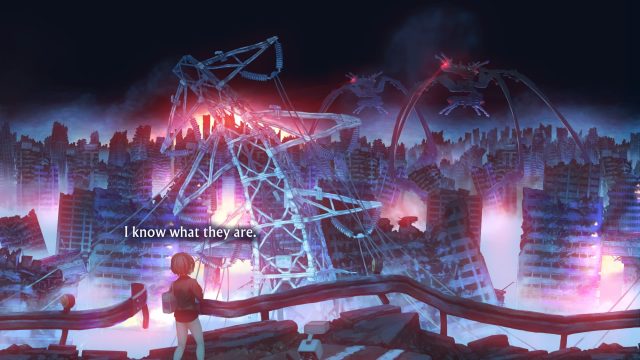 It’s not a good future.

In between each of the protagonists’ introductory stories, there is a tutorial battle where players must fight off invading kaiju forces in the 2060s using mechs piloted by those same seven protagonists, plus six other characters to make up the eponymous thirteen Sentinels. After the prologue, the game looks to spread out even more widely in structure, letting players advance characters’ stories or continue the fight against the kaiju, with an analysis menu also giving more context for the order of events. However, particular requirements — such as advancing far enough down another story or complete more combat missions — must be met elsewhere for certain character’s stories to be continued.

Though determining exactly what’s happening is a fool’s errand at this stage, the prologue to 13 Sentinels: Aegis Rim absolutely encourages interest in its proceedings. The story sections feature a side-on view with incredibly good-looking backgrounds, with players exploring the location to investigate clues or talk to other characters, occasionally linking clues or people together via the Thought Cloud menu. The prologue drops in a ton of fascinating threads that are begging to be followed and hints towards items of importance, as well as some curious relationships and histories for each of the characters involved. There’s an interesting cast of distinct characters already, and watching all of their stories come together promises to be gripping viewing. As the English voice acting won’t be available until the day one patch, the prologue voicing was only in Japanese, but the performances are strong, with the same applying to Atlus’ localisation.

Combat sees players controlling a team of mecha Sentinels against groups of invading enemies on an isometric tactical map, attempting to either defend a main terminal long enough for it to activate and wipe away the invaders, or simply wipe them out themselves. Failure comes when the terminal is breached or if any of the Sentinel pilots are killed. Sentinels can automatically retreat and repair when knocked to zero HP, but they will eject the pilot to do so, making them incredibly vulnerable for that time. There are four different types of Sentinels, each taking on a particular role based on its generation — melee, all-around combat, long-range, and aerial support — and better at dealing with different types and formations of kaiju making their assaults. 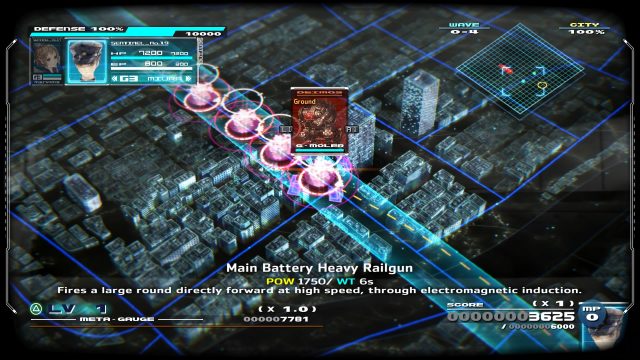 Alas, enemies won’t line themselves up quite that neatly very often.

Players have a number of potential actions for each of their Sentinels. Each has three attack actions based on their type, with different ranges and targeting areas. The more powerful options use up energy points, which can be recharged at the cost of putting that Sentinel out of action for a short while. Proceedings pause while players are selecting their actions, so there is no reason not to take time to plan things out, such as moving Sentinels to make the most of each attack or figuring out where the most immediate threat is heading. There looks to be a good number of strategic elements to take advantage of, including placing mines or sentries, finding ways to slow down the enemies, and dealing extra damage from the rear, but also multiple threats to consider, such as missiles that may need to be shot down or enemies that can strike at long range and need to be brought down before they can do too much damage.

The prologue battles are all built very much on the easy side to introduce layers to the basics, so it remains to be seen what direction it takes going forward. However, what’s there in the prologue has a highly engaging mixture of satisfaction from managing to line up effective strikes and a sense of danger from converging enemies, with the main event giving players three difficulty settings that can be changed at will.

13 Sentinels: Aegis Rim is definitely something different for RPGamers to sink their teeth into, as what I’ve seen so far has me fascinated for what is yet to come. The game launches for PlayStation 4 in North America and Europe on September 22, 2020.

Disclosure: This article is based on a free preview copy of the game provided by the publisher.