Ravenage Games and Dreamside Interactive have Frozen Flame available on Steam Early Access. The Early Access version of the multiplayer open-world survival RPG is available for $29.99 with a 15% launch discount. The game is initially expected to spend up to a year in Early Access. An update roadmap image and a launch trailer can be viewed below.

Frozen Flame is set in the procedurally-generated world of Arсana, which was once governed by dragons. However, the land has been cursed by the Faceless and requires those able to use primeval magic to obtain power and allies to defeat the Faceless at the Ice Citadel. Players are able to create their own fortress to protect themselves and their possessions, and can host their own server with custom rules. 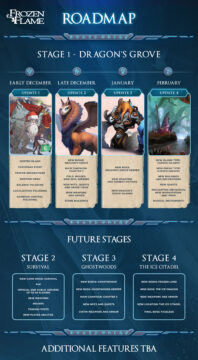