My favorite part: playing with my boar.

WitchSpring R, a remake of the first WitchSpring mobile game, is a story-based JRPG about a witch chased after warriors, combining elements of training, collecting and exploring. Its PAX West demo didn’t waste any time with the setup. I, as the witch Pieberry, was plopped down in a forest near my home. All of a sudden, some warriors appeared through a portal nearby. They didn’t seem to really know where they were but became hostile so I entered the turn-based battle sequence.

The demo didn’t provide the most useful introduction to the game; it came with some gameplay tutorials, but little to help understand what was actually happening. While their reasons for attacking Pieberry were unclear, it seemed she and I needed the pies they were carrying. The combat was pretty straightforward with options for melee and magic spells. However, I only had one initial spell to use in battle, so there weren’t many tactical options. When I finished battling the warriors, I talked to them about letting them go for their pies. After combat, a peaceful pie-exchange was negotiated, but just before getting the prize, they were scattered into the forest by a golem. 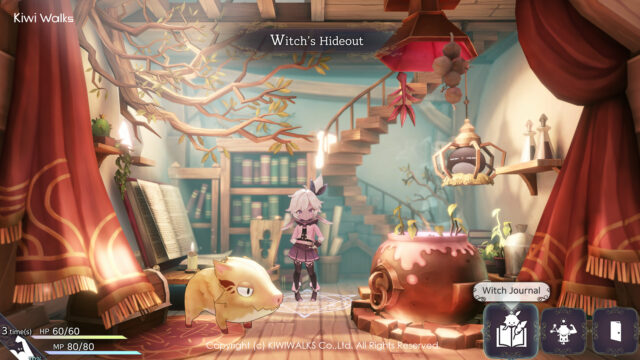 My favorite part: playing with my boar.

After this Pieberry went home and I got to learn how to carve some magic spells into a stone, which I was able to use in future battles with more confused warriors, which made combat a bit more interesting. The demo also introduced its pet mechanics. As I collected things around the forest for my spell cauldron, I ran into a boar. The boar was picked up by a crow, which I tried to tame as my pet. The crow dropped the boar and flew off, but I was able to recruit the boar instead, which I could ride around to help gather things quicker, and invited him into my home to have food and a place to rest.

The game was pretty straightforward to play, but its lack of story context did leave me confused. I felt the game mechanics and the idea is there, and it’s a very pretty game, but being dumped straight in left me a bit lost. Why are warriors after me? Why do I want to beat them into exhaustion for their pies? I have many questions. Hopefully WitchSpring R’s release, planned for PC and consoles later this year, will allow me to answer those questions.