Following its announcement last month, Nippon Ichi Software has shared new information regarding Disgaea 7‘s gameplay systems, as well as two new playable character classes. The game is the latest entry in the long-running strategy RPG series. It is currently only confirmed for a Japanese release for PlayStation 4, PlayStation 5, and Nintendo Switch on January 26, 2023.

The game takes place across the Hinomoto Netherworld Cluster, which has been taken over by the corrupt Oedo Shogunate. It is up to the lone samurai Fuji and otaku girl Piririka to travel Hinomoto and obtain the legendary weapons known as the “Seven Blades of Origin” in order to liberate the land.

Disgaea 7 continues the series tradition of driving damage numbers into the millions. Characters can be powered up via the reincarnation system, which starts them back at level one while retaining many of their previous stats and abilities. The Item World returns as well, letting players send their fighters into randomly generated item dungeons to improve consumables, weapons, and gear.

A new feature of the game is its Dodeka MAX system, which enlarges a character to such an extent that they do not even fit inside the battle map, but have to tower over it using new Dobilities that add a new dimension to battles. Up to two friendly units can be Dodeka MAXed at any time, with enemies also able to enlarge two units of their choosing. 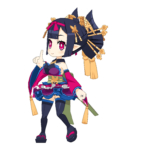 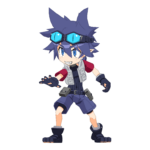 In order to keep up with the near-endless growth options of characters and items, players can once again determine their troops’ combat behavior. By using the Demonic Intelligence system, players can send their armies into battles by themselves, though special character-developing resources are awarded for manually clearing stages. Online ranked battles also let players test their mettle against others in Demonic Intelligence matches.

In addition to the many returning character classes, two all-new classes can be recruited into players’ armies. The “Maiko” is a girl who dazzles opponents with her enchanting dances and deals additional damage against male opponents. The “Thief” is a master treasure hunter, improving the type of loot players will find in chests (it is a different design and skill set to the previous Thief classes and may be named differently in any English release).