This full-length adventure gives fans of Solasta: Crown of the Magister a fabulous reason to try out a fresh party composition on a fresh journey.

Last year, Solasta: Crown of the Magister brought the Dungeons & Dragons 5e experience to the personal computer. Arguably the most accurate mechanical representation of the table-top experience, Solasta won many RPGamers over with its charm and attention to detail, including dice rolling on the screen with every attack. The game also brought significant verticality to exploration and combat, with both players and monsters able to use climbing and flying to better position themselves on the battlefield. eveloper Tactical Adventures has now expanded its offering with a mammoth DLC, Lost Valley.

Right out of the gate, Lost Valley gives players more choices in character creation, as the DLC adds a new sub-class for each of the nine main classes in the game, though two require previous DLC Primal Calling. For example, the Commander fighter sub-class can buff allies by shouting and using defensive tactics, while the barbarian sub-class Path of the Claw gains bonuses based on their ancestral dragon and breathes a cone of elemental damage at higher levels. Lost Valley also tosses in additional classic monsters, such as towering giants and incredible golems for the party to fight, as well as four new environments. These can be utilized with the dungeon maker to give would-be dungeon masters more ways to test players. All of this along would already be worth the asking price of $12.99. 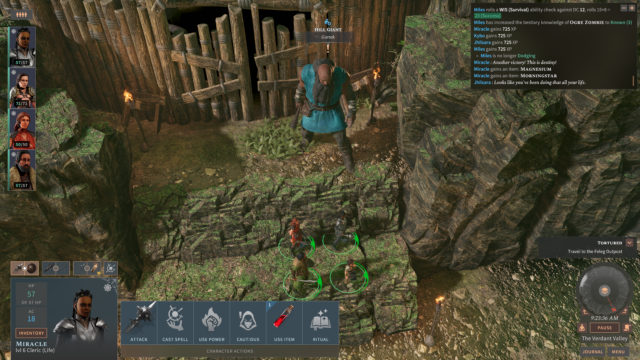 Maybe he just seems taller because he’s up on a step.

However, Lost Valley also includes a beefy campaign, nearly on a scale with the original included with the base game. Players create a fresh party starting from level 1, to explore a secluded valley controlled by a powerful leader. With no immediate way to return home, the party has no choice but to assist the locals and the politicians in order to figure out how to get out of the titular Lost Valley. However, tensions are already running high between various factions, and the actions of our heroes will certainly cause some problems. RPGamers will help direct the future of the people by choosing which quests to resolve. In that respect, Lost Valley feels more open-ended than the main campaign.

This full-length adventure gives fans of Solasta: Crown of the Magister a fabulous reason to try out a new party composition on a fresh journey. While the campaign of Lost Valley does not have quite the length and amount of dialogue as the main game, it has all of the other features including guild reputations, crafting, multiple locations, new environments, and plenty to explore. The writing falls a bit short and feels a bit rushed. However, it provides enough incentive to continue to move forward and see how events ultimately unfold. While it sadly does not raise the level cap or add any new classes, the sub-class additions, fresh monsters, and the exciting new campaign more than make up for this oversight. Those who enjoyed Solasta: Crown of the Magister should purchase this DLC without hesitation.