Ghostwire: Tokyo’s readiness to toy with the mixture of the real and spiritual worlds helps make it stand out, thanks largely to the efforts in generating the eerie atmosphere as well as the detail put into the setting.

Tango Gameworks’ Ghostwire: Tokyo is a first-person action adventure title with an expanding open world. The game is set in a distorted version of Tokyo where most of the citizens have disappeared and the streets are filled with spirits called Visitors, which players must defeat using paranormal abilities described as “karate meets magic”. RPGamer had the opportunity to attend a virtual press event and preview some gameplay from the early portions of the title — different from that featured in the recent showcase — ahead of its release towards the end of March.

Ghostwire: Tokyo follows Akito, a young man who manifests supernatural powers after becoming linked with the spirit of an experienced ghost hunter named KK. The linking comes after Tokyo is suddenly enveloped by a fog that causes its citizens to disappear and the Visitors to manifest. The situation is seemingly the result of actions by a mysterious man wearing a hannya mask, who loudly espouses grand ideas about a new dawn for the world, and who KK is intent on hunting down, promising Akito that it is the only way to rescue his family. 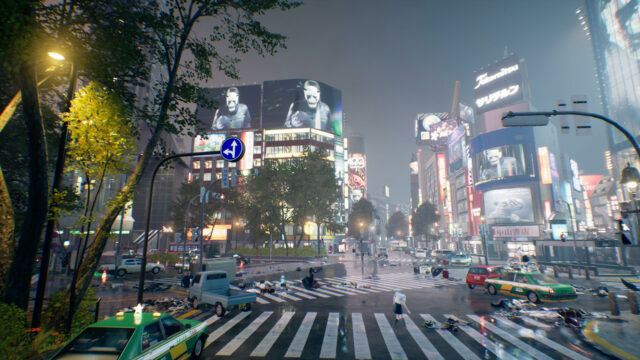 Tokyo’s citizens are gone, and in their place are creepy beings called the Visitors.

The primary gameplay loop of Ghostwire: Tokyo sees Akito investigating the city for clues, allies, and missions, while helping to push back the fog by cleansing the numerous torii gates around Tokyo. While doing this, he will need to avoid or defeat any Visitors he comes across by using his abilities. Akito’s powers allow him to use magical energy with hand movements and this energy will visibly damage enemies. Once enough damage is done, Akito is able to access the Visitors’ cores and destroy them. There is a bit of strategy involved since cores take a couple of seconds to destroy, so players need to beware of other Visitors attacking in the meantime, but multiple cores can be handled at once. Akito is able to defend using an energy shield, but it wasn’t clear from the gameplay how much leniency players get in their timing.

Akito starts off with just a wind-based attack but soon gains access to fire and water-based moves. Attacks have limited “ammo”, but more is found through relevant coloured crystals dropped by enemies. He also has a bow and, again, arrows are limited but can be found at various points around the city. As the game progresses, Akito earns skill points, which can be spent improving his abilities and equipment.

The Visitors and the fog aren’t the only threat to Akito. During the presentation, he found himself assaulted by a web of corruption, trapping him within a small area and distorting it so that Akito often finds himself walking on walls or the ceiling as he searches for the corruption’s cores before it swallows him, as indicated by a timer on the top of the screen. It was certainly disorientating, albeit there always seemed to be a clear path to advance through it. 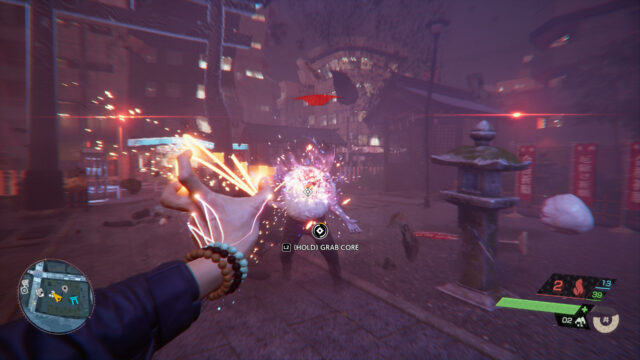 Combat is primarily about trying to destroy the enemies’ cores.

The Visitors also aren’t the only spiritual beings around. Akito will come across Yokai and the spirits of people, many of whom will offer sidequests or, as is the case of a floating feline, act as shopkeepers. Players can also find the spirits of those citizens swallowed and trapped by the fog and can suck them up into katashiro (paper dolls). The katashiro can then be brought to any payphone where the spirits are sent outside where they can be fully restored. One of the priorities in the campaign appears to be getting in touch with KK’s former companions. It’s not clear how big of a role these characters will have in the game, but some additional footage showed Akito protecting one of those characters while she accessed a computer system.

Though I can’t make any comment on the street-level accuracy of its depiction of the metropolis, Ghostwire: Tokyo is vibrant and detailed, has very strong lighting and visual effects, and definitely feels the part. Most of the Visitors are appropriately disconcerting, such as faceless salarymen or headless students, often holding umbrellas to slightly disguise themselves. The way they attempt to unflinchingly advance further illustrates their distinction from humanity. There’s an eerie and unnaturally empty feeling to Tokyo, while the game uses reality warping to further ramp up the strangeness of what’s going on. 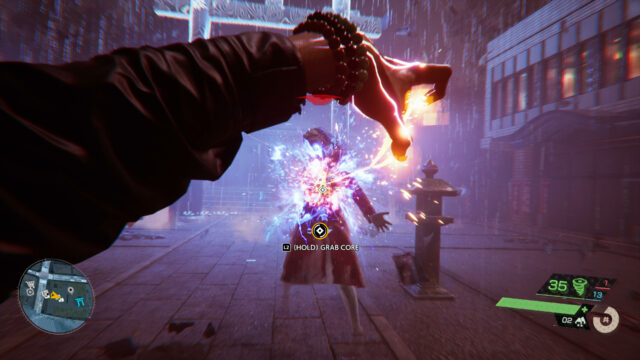 Ghostwire: Tokyo looks to have plenty of style and atmosphere.

The footage shown was with full Japanese voice acting and English subtitles; it’s a limited sample, but the performances initially sound strong and ensure there isn’t a sense of anything missing with the absence of English audio. The chatter between Akito and KK works well in the footage shown and, similarly to the visuals, the audio does a great job complementing the atmosphere through music and background noise, as well as kicking up a gear when it’s time for action.

Ghostwire: Tokyo has a different vibe to it than the developer’s The Evil Within series. Though horror elements are there, Ghostwire: Tokyo looks primarily action and exploration-focused. What I’ve seen so far certainly makes it one of this year’s most intriguing games, and it has a very high potential. Its readiness to toy with the mixture of the real and spiritual worlds helps make it stand out, thanks largely to the efforts in generating the eerie atmosphere as well as the detail put into the setting. The biggest question at this point is how the combat and gameplay will hold up after time and whether it has enough to avoid the open-world bloat trapping. It won’t be very long until we find out as Ghostwire: Tokyo is set to release on PC and PlayStation 5 as a timed console exclusive on March 25, 2022.