Blacksmith Legends includes a considerable number of mechanics that allow it to go beyond a simple crafting sim.

Distributor RockGame gave RPGamer the opportunity to try the Steam Early Access version of Blacksmith Legends. This simulation RPG changes the paradigm of most games and offers players the chance to craft weapons and materials for others instead of being the one buying them from their local merchant. In addition, Blacksmith Legends includes a considerable number of mechanics that allow it to go beyond a simple crafting sim, with the full game release promising to include even more features.

Players name and take control of a craftsman who inherits a workshop. Their aim is to complete jobs to gain money and fame. Besides completing these errands, the blacksmith can craft objects to sell in the local market. Selling these objects to townspeople not only gives monetary compensation, but also helps the town to develop in areas such as agriculture and warfare. In a sense, the workshop is the heart of the city and impacts everything around it, making the craftsman an important figure in this society. As players complete quests, they unlock new recipes, places, and features. The prologue nicely teaches players how to get fame and have a stable economy, and the subsequent parts of the game allow them to explore, have combats, and make their business grow even more. The game effectively goes from an apparently simple crafting-selling routine to giving a vast array of mechanics to oversee.

Blacksmith Legends includes a time indicator that also displays the day of the week. The blacksmith has working and resting hours; the market, the tavern, and other facilities open only at certain hours; and mining for materials can only be done at specific times. At the end of every week, the craftsman receives a wage, but he also needs to pay taxes to the town, as well as pay the recruited workers and heroes. The game has the option to make time pass faster and leave some chores as automatic, which ultimately helps a lot to keep things running without the need to supervise everything and letting players go through an in-game week in mere minutes. Constant mining and selling crafted materials are compulsory to have a thriving economy. After finding a good balance between these two activities, players can safely automate them and use their time to explore the world map, go to other towns, hire workers, and expand their business. 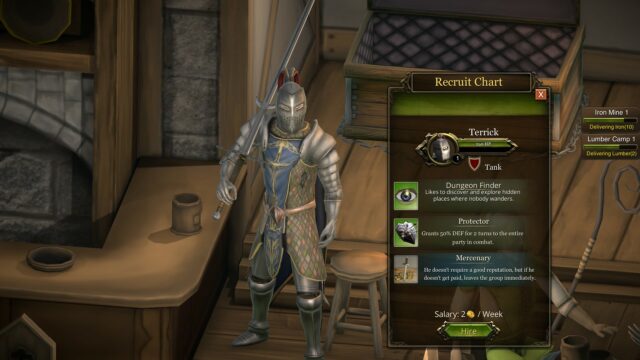 The blacksmith can hire heroes, but it will cost him.

Blacksmith Legends doesn’t provide an elaborate story and instead focuses on the daily and mundane life of the Middle Ages. Quests are mostly errands in which players craft a specific number of articles for a client without asking any questions. Some quests, however, include characters who can be considered bad, such as thieves, and contain a little more background, making players accomplices if they decide to provide weapons to criminals. Players earn a good or bad reputation depending on what quests they decide to complete or which course they take at certain times. In the end, the decisions of a simple blacksmith are going to impact the whole kingdom.

Heroes can be hired to explore the world and its multiple points of interest. There are other towns, mines to get new resources from, and dungeons with enemies to defeat. Sometimes the heroes are also able to grab materials while they explore. Enemy encounters are automatically resolved, with players only seeing cards representing the combatants hitting each other. Players are able to choose whether or not to engage in a fight after comparing their party and the enemy’s power, but that is the extent of combat interaction and it feels like combat would be more fun with some direct engagement. Besides mercenaries, players can hire other workers to help with tasks such as crafting ingots and potions. More helpers can be hired as the blacksmith gains fame, with both heroes and workers needing to be paid wages at the end of each week.

After players have completed a decent number of quests, new features become available, such as a bulletin board to find new quests or merchants who can sell building materials. Building and adding objects to the workshop can grant bonuses such as more fame or working faster. There is also an arena that unlocks features such as tournaments and training. Unlike battles in the world map, battles in the arena allow players to directly control the fighter, but even when this is welcome, combat isn’t extremely fun to play. Thieves who rob players at night also appear after a while, so the craftsman needs to hire protection as well. Some features are still under development, but the full version promises to include gossip from the bartender among other additions. Both the graphics and the audio do the work but are not noteworthy at all and don’t seem to be planned to change when the full game releases.

Blacksmith Legends is a sim game set in medieval times and seems to be an easy recommendation for those who enjoy the genre. More than managing a simple workshop, players are able to decide what happens in the kingdom from their forge. The game is currently available on Steam Early Access, with a full release expected in the next one-to-two years.