Blending RPG and adventure is a hard undertaking and Sacred Fire is up to that task.  I’m looking forward to seeing how the story progresses and ends.

Sacred Fire takes the idea of a “choices matter”, narrative-driven adventure game and and brings it into the RPG sphere through stat-based character building.  After checking out it’s Steam Early Access version, it’s pleasing to report that the combination works wonderfully, with dice rolls giving weight to each decision.  Though getting particular choices can take some luck, this does not mean that everything is left to the mercy of dice rolls as how the player roleplays is ultimately the driving factor, with plenty of time spent in the protagonist’s head reflecting on everything they are doing.  Publisher Iceberg Interactive and developer Poetic have the makings of a game that is nothing short of a cerebral spiderweb.

The story in Sacred Fire is a simple one, the protagonist is a young member of a nomadic tribe in Caledonia (Scotland) hunted by a Roman legion.  The player witnesses the Roman advance has continued and the village will soon be in danger of attack, but the uneasy peace has lasted long enough that many believe another invasion is not forthcoming.  Soon enough, while out hunting a deer, they see black smoke billowing from the Roman advance.

At this point the choices come thick and fast. For example, the player can be beaten up by the local bully, lose the deer, and be left unconscious and none the wiser about the Roman advance.  While another instance has the player meet up with a childhood friend, kill some invading Romans, take a trophy, and ignore said bully.  This accounts for just one chapter of twenty in the first act — with the full game planned to cover three full acts — that continues to twist and turn through various choices until reaching an ending that leaves plenty of unanswered questions to return to.  Important figures in one playthrough may not be met at all in another.  The only jarring moment that broke the immersion was one possibility the player didn’t meet up with their childhood friend in the beginning yet was still able to discuss their meeting as if they had. 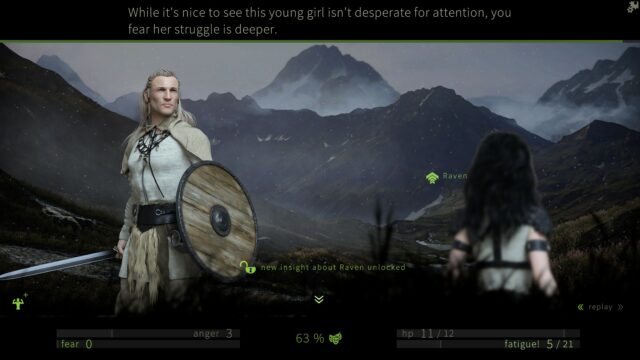 Sacred Fire plays closely to a choose your own adventure title.  The differences lie in how the choices are made, with every important decision determined by a roll of a dice.  The higher the roll the less likely the option is to succeed.  Three attempts can be made at any non-risky choice.  If that third attempt is failed, players can pay for success with a motivation point (MP).  Players begin with a pool of MP and can obtain more by gaining experience or getting into less stressful situations.  If the player runs out of MP, they can instead spend an attribute point in rage, trauma, guilt, or vitality — built up by their choices in the game — to refill it halfway.  Players will want to avoid this if they can as sacrificing attributes can negatively affect the their ability to survive in combat, act, lead others, or resist negative impulses.  In certain situations where there’s isn’t time narratively to think, such as shooting an arrow at a legionnaire or timing a jump over a rock while running down a hill, the game changes to a risky choice system.  These have no automatic success options, with MP instead contributing an additional 20% chance of success.  This is a cool mechanic, contrasting careful thought with the risk of putting things into action.

The game is not very forgiving as many choices come down to using MP, and choosing where to fail is part of experience.  The only instance of a game over occurs when the protagonist dies, otherwise, everything else is fair game.  A fear and anger gauge fluctuates depending on the situation they are in and is important to note because it affects the speed and precision of the player’s actions.  A freaked out player can’t shoot a bow accurately but is more ready to jump over a log.  Replaying chapters after failed rolls is possible but will overwrite the previous path and only one save file exists, which leaves players to the mercy of dice rolls and the choices that they make.  Replaying a chapter is most useful for ensuring the survival of NPCs that can die during the course of the campaign.  As only the first act is currently playable, the full consequences of events and certain characters’ survival remains to be seen. 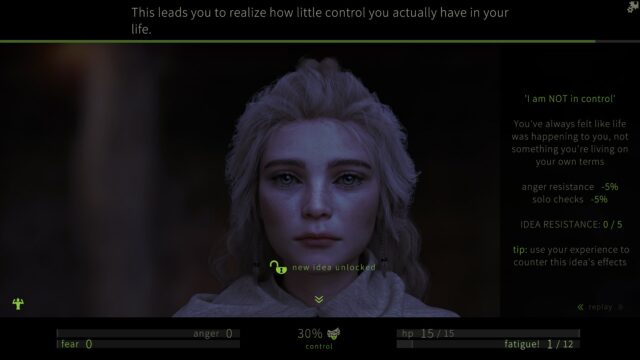 Occasionally everyone feels like they are not in control.

Sacred Fire‘s character growth has multiple facets.  Regular experience is earned with every choice and action and leads to standard attribute gains as well as points to spend on mindsets.  Mindsets are introspective thoughts that provide passive bonuses such as resistance to negative impulses or better rolls on friendship checks.  Elsewhere, renown points are acquired by making certain dialogue choices or succeeding at risky checks.  These can be spent on unlockable titles that increase attributes.  Finally, goodwill points are earned by making positive choices for people around the protagonist and can be used to help improve relationships with other NPCs.  These interconnected elements make every choice important as they alter or improve an aspect of the protagonist and their relationships.

The visuals of Sacred Fire are flat, yet detailed, cutouts to portray the characters that feel pasted on to a background mosaic for any scene as they play one by one.  However, the details in this game and what makes it such a cerebral journey are in the writing.  Inner monologue has the most description, while any action speeds by.  No matter what choices are made, there is a logical connection to each step of the way.  The amount of work to spiderweb each choice is staggering to contemplate.  The musical score finds a way to weave throughout the possibilities deftly and makes every moment hit harder, while the voice acting for each character is very fitting and helps accentuate each spoken line.

The sheer amount dialogue options in Sacred Fire shows a lot of time and effort has already gone into making this a very personal story.  Not only is the protagonist well developed at this point but so are the main NPCs.  Each of them are very well thought-out and seeing how their stories can change makes it worth coming back to.  Sacred Fire has proven that it knows how to dive into a person’s psyche, how getting lost in overthought can feel longer than taking action.  Even if dice rolls can feel frustrating when they don’t go their way everything finds a way to feel genuine.  Blending RPG and adventure is a hard undertaking and Sacred Fire is up to that task.  I’m looking forward to seeing how the story progresses and ends.